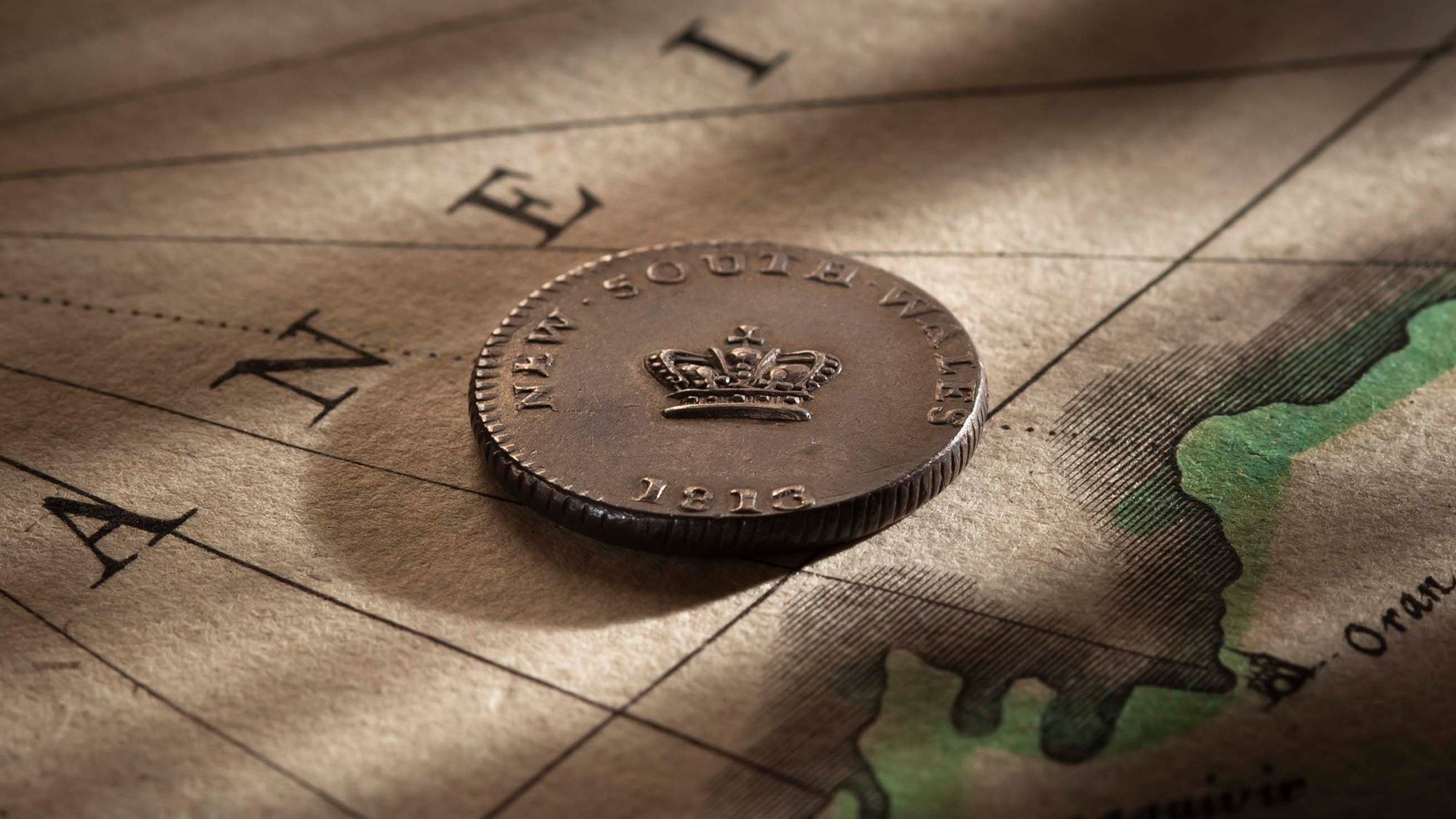 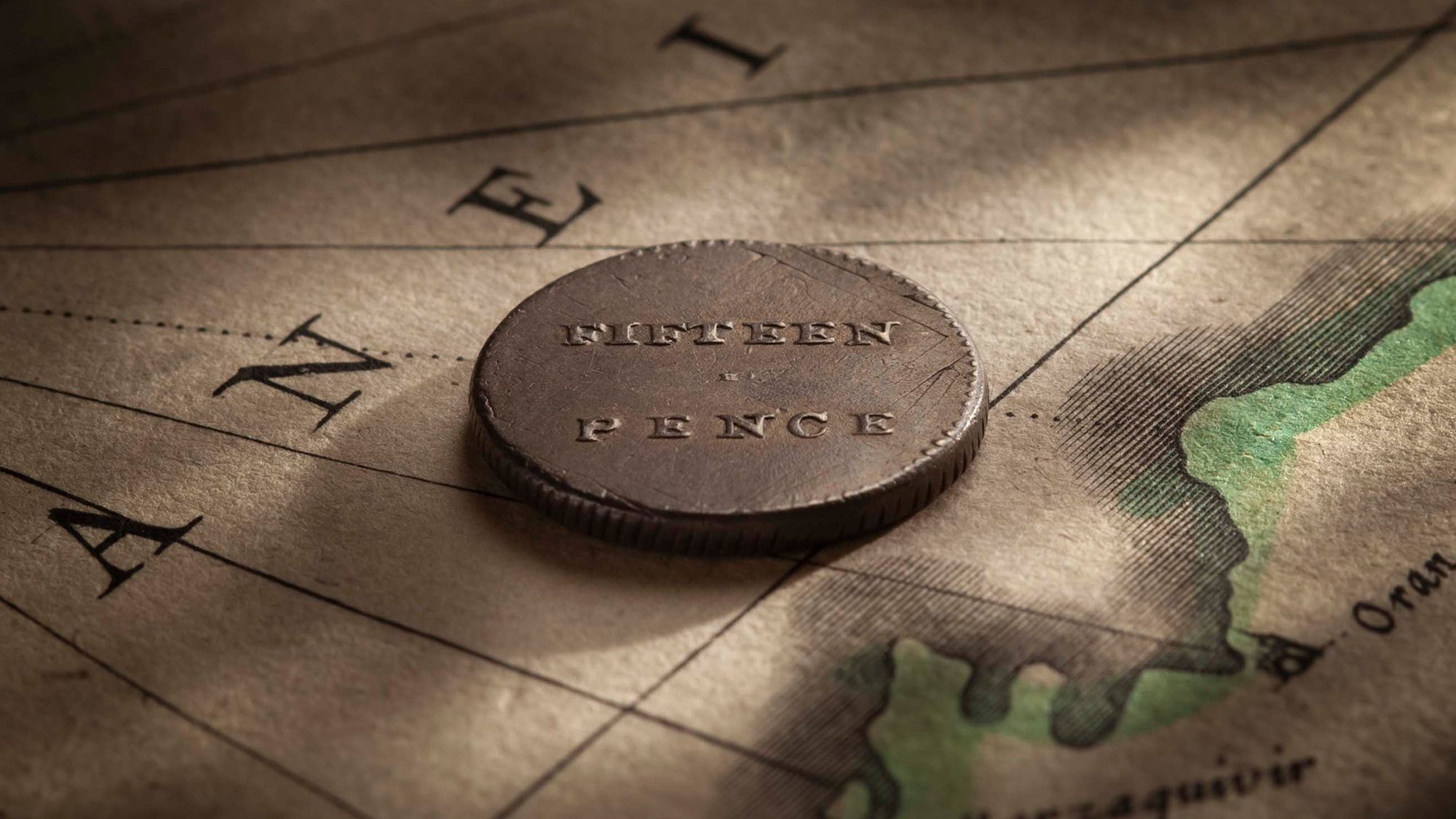 The finest 1813 Dump struck with the rare D/2 dies
COIN
The finest 1813 Dump struck with the rare D/2 dies
PRICE
$165,000
STATUS
Sold May 2021
QUALITY
About Uncirculated
PROVENANCE
Sotheby's London, March 1901 in the sale of the W J Davis Collection. Sotheby's London October 1920 in the sale of the Dr Hubert Peck Collection. Virgil Brand Collection. Stacks New York January 2004 in the sale of the John J. Ford Collection. Exhibited at the "Dollars & Dumps" Exhibition ANZ Gothic Bank Collins Street Melbourne November 27 - 30 2007. Exhibited again at at the "Holey Dollar - A Symbol of Innovation", Macquarie Bank 1 Martin Place Sydney 2 October to 18 October 2013. And more recently at the "All That Is Holey" Exhibition, Royal Australian Mint Canberra 16 August to 3 November 2019.
COMMENTS
This 1813 Dump comes with impeccable credentials. The coin set a new world record in 2004 when it was offered at Stacks Auction, New York. The coin was at the time the personal property of influential American dealer, John J. Ford. What makes a coin a record-breaker? The answer is simple. When the design has been so well executed during the minting process that the coin is the exception rather than the rule. And when its state of preservation verges on the miraculous. John J Ford's 1813 Dump has quality traits that are unique to this coin. The strike is exceptionally strong. And its state of preservation is miraculous. 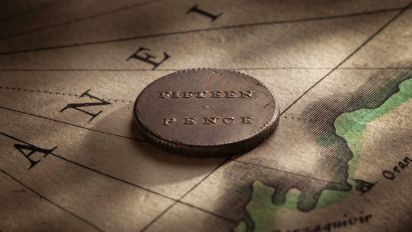 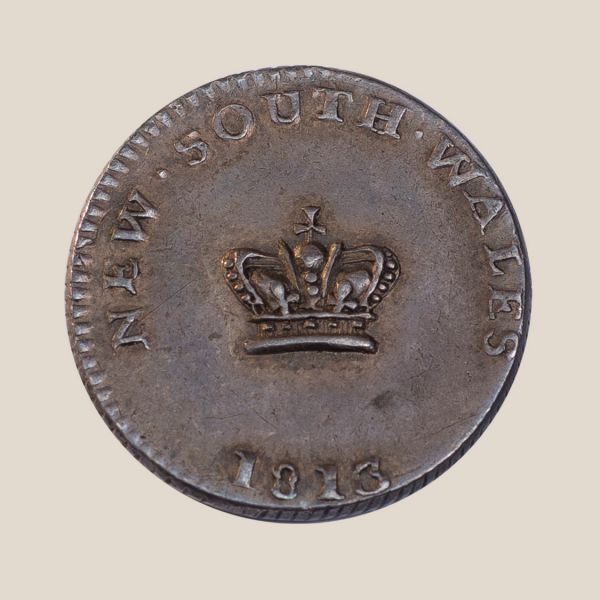 The obverse has smooth and highly reflective fields with stunning grey / blue toning. Under the glass you see the horizontal cross on the orb at the top of the crown, the only D/2 Dump to show this design element. On both left and right in the crown, the fleur-de-lis are untouched, the pearls crisp.

Historians have determined that four individual dies were used in the striking of the 1813 Dump. The A/1 Dump is the most frequently sighted (75% of cases). Next in line for availability is the D/2 dies (20%).  Then comes the C/4 and E/3 Dies that while incredibly rare, produced coins that were extremely crude, the suggestion being that they may have been test-pieces especially prepared for Governor Lachlan Macquarie before production began.

Exceptional depth of detail in the coin's design

This 1813 Dump has quality traits that are unique to the coin.

Under the glass we note the horizontal cross on the orb at the top of the crown. Most collectors would not even be aware that, as with the 1852 Adelaide Pound, the Dump design includes a cross on the orb. This is the only D/2 Dump to show this design element.

We also note that the two fleur-de-lis are three-dimensional and untouched, the pearls crisp.

And there is a 'stop' in the legend 'NEW SOUTH WALES' after 'NEW' and after 'SOUTH'. The dies would have had shallow depressions to create the stops and must have quickly filled with debris for they can be difficult - or impossible - to discern on even the best of D/2 examples.

And the 'H' for Henshall is crystal clear. William Henshall was determined to declare his involvement in the creation of the Dump but fell short in leaving his mark on every die. It is noted that this design element is rarely ever present in those coins struck using the D/2 dies. And even when it does appear, the 'H' is simply a blob.

A miraculous state of preservation

The Dump with a value of fifteen pence circulated widely in the colony, the extreme wear on most Dumps evidence that they saw considerable use.

Not so with this Dump. The fields are highly reflective with stunning grey / blue toning, the coin mint fresh for quality. Its state of preservation is simply miraculous. 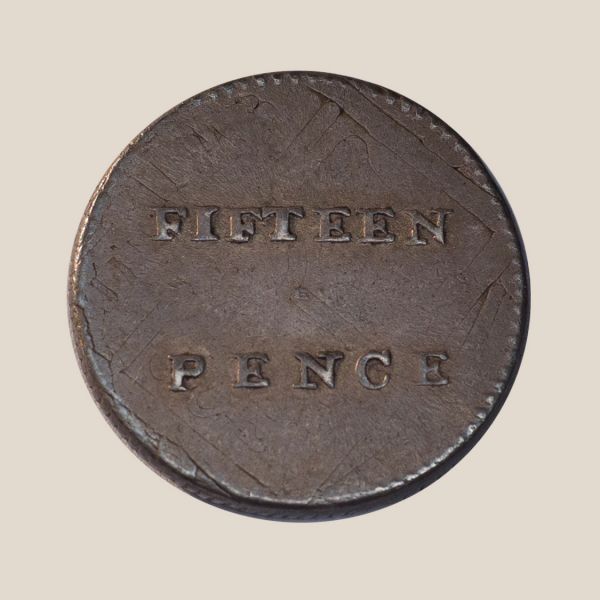 The reverse also is smooth and has highly reflective fields with stunning grey / blue toning. There is extensive evidence of the original Spanish Dollar design, including the cross-bars of the shield and the lion and castle. And the 'H' for Henshall is, under an eye glass, crystal clear.

There is no doubt that heat was involved in the creation of the Dump. When the disc fell out of the centre of the Spanish Dollar, it still bore the original dollar design of a four quadrant shield, housing a lion and castle in each quadrant. And the shield's cross-bars. Referred to as the undertype. High temperatures obliterated the original Spanish Dollar design from most Dumps.

Those Dumps that retain the original dollar design elements are highly prized.

This Dump has extensive evidence of the original Spanish Dollar design on the reverse, including the cross-bars of the shield and the lion's tail and the castle.

The origins of this 1813 Dump can be traced back more than a century over which time it has been owned by four of the world’s most famous collectors … W. J. Davis, Dr Hubert Peck, Virgil Brand and John. J Ford.

Birmingham resident, William J. Davis was a renowned collector of British coins in the mid to late nineteenth century. While he didn’t have access to the bank of information that today’s internet provides, he would have used the experience and hindsight gained from his own market and his research to guide his selections. Quality would have been paramount.

He would have been aware that the Dump was the workhorse of the penal colony of New South Wales. We can only imagine his absolute pleasure at acquiring an almost pristine perfect Dump.

The quality and significance of the coin was reinforced when it was picked up by Dr Hubert Peck in 1901. And reinforced again and again when it changed hands from Virgil Brand to renowned American dealer John J. Ford.

Publicly acknowledged as a record breaker

This Dump made history and set a new price record in 2004 when it was offered at Stacks New York Auction, the property of US collector John J. Ford. It was the very first time that an 1813 Dump had commanded in excess of $100,000, the coin selling for A$110,000.

The record price asserted the authority of top quality Dumps.