Mystery of the 1927 Canberra Florin.

1927 is the year the Melbourne Mint struck the Canberra Florin, a pre-decimal classic and a favourite amongst collectors. Worth maybe $40 if it is in pretty ‘good nick’, the Canberra Florin can take on a $40,000-plus value if it is a high quality PROOF example.

So what does ‘Proof’ mean, and how do I tell if mine is a ‘Proof’? And why is it so valuable? We share our secrets.

What is a Proof Coin?

Coins are struck in two different styles and for two distinctly different purposes. 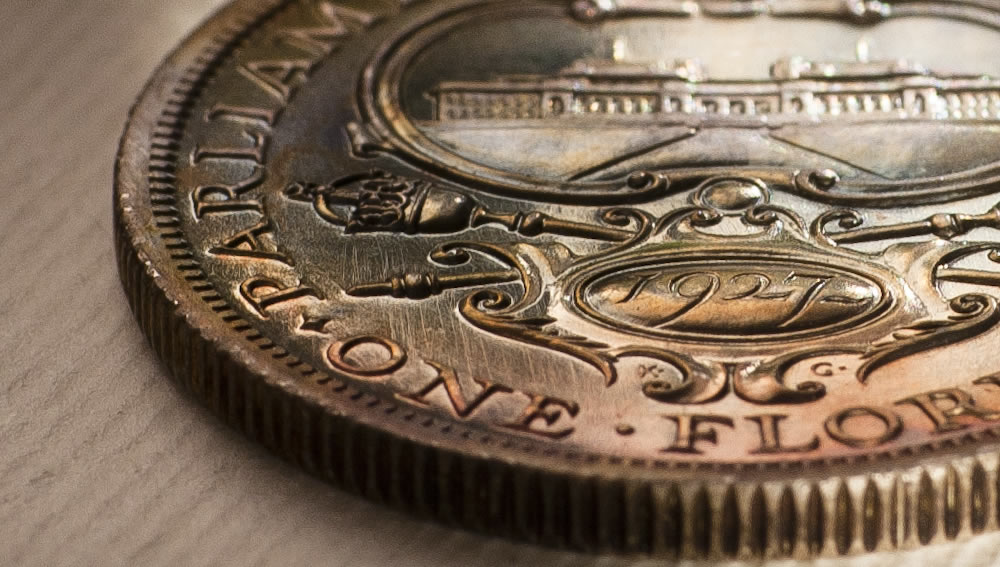 These two facts, the large mintage and the sentiment towards hoarding because it was struck for a special occasion have diminished their value in today’s market. It may be harsh but it is true that average circulated Canberra Florins are relatively readily available.

The confusing part for the novice is that Proof coins look, essentially, the same as the coins struck for circulation. They share the same design and are made with the same metals.

The tell-tale signs of a Proof Canberra.

But there are some tell-tale signs, particularly with the Proof Canberra Florin that may assist you in an identification process.

Put your Canberra, date side up, under a magnifying glass. If it is a proof there will be raised lines at a 45 degree downwards angle between the oval encasing the date 1927 and the ONE in the legend.

Turn the coin over and there also is extensive raised lines in the fields in front of, and behind, the portrait of George V.

Proof coins are the product of extensive die preparation. Those lines might look like scratches (and we are not talking about scratch marks that come from circulation).

They are the clear evidence that the Melbourne Mint manually brushed the dies, and in so doing created scoring marks in the dies; marks that were replicated onto the coins during the minting process as raised lines.

Every Canberra Proof Florin has the tell-tale raised lines in precisely the same position and the same direction.

Struggling to find those tell-tale marks? Then take your coin into your local coin dealer.

So why are proof coins so much more valuable?

The reasons relate to the numbers struck. The Melbourne Mint struck only 400 limited edition proof coins for collectors.

However, two million circulating coins were released to the general public.

It is the limited availability of the Proof Canberra combined with its popularity as a collector’s item that underpins its price structure.

With toll free numbers and on-line ordering, buying a decimal proof coin has never been as easy as it is today.

Nor have proofs been as readily available. The Perth Mint and the Royal Australian Mint in Canberra both run highly successful collector proof coining programs and together would release maybe three new proof issues per month.

It is a natural assumption that Australia’s pre-decimal proofs were struck on a similar basis. The reality is that this is far from the truth.

Prior to 1955, the issuing of proof coins for collectors was not considered a priority. As the servant of Treasury the Melbourne Mint was a prolific producer of coins for circulation.

The notion of producing limited edition pieces for collectors was almost non-existent and between 1916 and 1953 there were only eight years in which the Melbourne Mint produced coins to sell to the public.

When the Melbourne Mint assumed responsibility for the striking of Australia’s silver coins in 1916, the occasion was commemorated by the production of 60 presentation sets. The coins were struck to specimen quality and housed in a handsome royal blue case. Twenty five sets were given to dignitaries and politicians. Some of the inventory was sold, with the balance more than likely melted down.

Whilst the mint had displayed a hint of commercialism in producing this set, the reality of the striking was that it was a ‘one-off’. It did not establish a precedent for the further issuing of proofs in a commercial sense.

The next proof issue to come within reach of the public was 11 years later in 1927, to commemorate the opening of Parliament House in Canberra.

That the collector and dealer market were denied regular access to proof coins inspired an alliance between the two groups to lobby Treasury for regular commercial proof coin production. Their efforts culminated in the issuing in 1934 of what is realistically the first commercial proof coin set, struck by the Melbourne Mint and authorized by Treasury, but financed by the private sector.

The momentum of proof coining production continued with proofs issued to the public in 1935 (again financed by the private sector), 1937, 1938 and 1939.

The Second World War put commercial proof coining on the backburner until 1953 when the Melbourne Mint issued 12 five coin specimen sets in response to a request from the Chase Manhattan Bank in New York.

From 1916 to 1953 there were only eight years in which the Melbourne Mint produced coins on a commercial basis.

These eight issues are of the utmost significance for they in effect lay the foundations of the proof coining program that today’s collector market so enjoys. They are detailed in the chart below: