Top quality 1813 Dumps are incredibly scarce and that is a fact that is well supported by research. We have charted the various grades and the numbers known at each quality level and you will be amazed at how few examples are available to buyers at the top end. 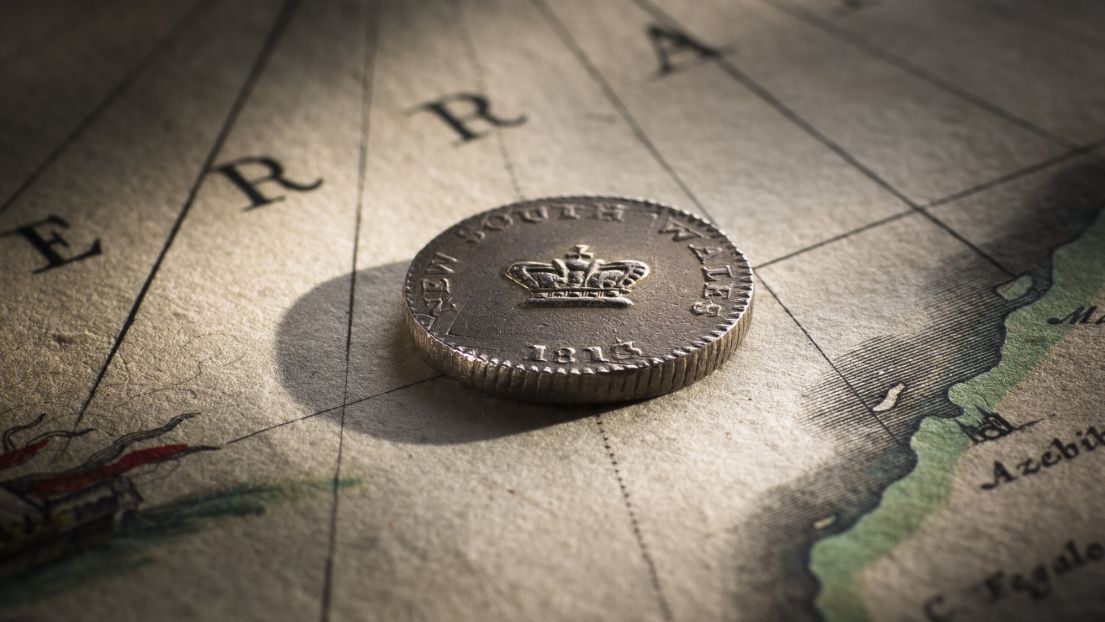 The Holey Dollar and its partner, the Dump, were the first coins struck in Australia. Their value extends well beyond Australian shores for they are both recognised and respected on the international stage.

Experience has shown us that the majority of Holey Dollar buyers will eventually pursue a Dump … a simple reflection of the collector’s psyche for completion.

The buyer that pursues a top quality Dump will find the task extremely challenging. It can be years before a premium quality example comes onto the market. It can be decades before the very best become available.

And that statement is said in the knowledge that there are perhaps 800 Colonial Dumps and 200 Holey Dollars (across all quality levels) available to private collectors.

The Dump with a value of fifteen pence circulated widely in the colony: the extreme wear on most Dumps evidence that they saw considerable use. The Holey Dollar being a higher valued piece, at five shillings, had a narrower band of circulation.

Historians have drawn evidence from Bank of New South Records to support this view. Official records show that in 1820 the bank held 16,680 Holey Dollars and only 5900 Dumps. Considering that 39,910 of each were released into circulation, the figures reflect the greater circulation of the smaller denomination Dump.

So while the Dump with a value of fifteen pence may seem to be the diminutive partner of the Holey Dollar with its Five Shillings value, the reality is that top quality Dumps have clout. They are extremely rare, in fact far rarer than their holed counterpart in the same quality level. And as such highly valued.

It is an interesting exercise to look at the availability of Dumps and their current market values with an acknowledgment on our part that there is a vast price difference between a well circulated 1813 Dump and one in the upper echelons of quality. But the information that we have gleaned from our research clearly shows the reasons why.

Moving up the quality scale you will find a Fine to good Fine Dump for $15,000 to $25,000. The design will be evident, but flattened, and the coin will more than likely be knocked around. The reality is that finding examples below the $25,000 price level is a relatively easy task.

Buyers that are looking for a higher quality example might stretch their budget to $30,000 - $45,000 and so walk away with an about Very Fine to Very Fine Dump.

The graph (and we refer you to the gold areas) clearly shows that the 1813 Dump is reasonably readily available up to, and including, a quality level of Very Fine.  What is also obvious from the graph is that Good Very Fine is the point at which extreme rarity kicks in.

The buyer that extends his budget to acquire a good Very Fine Dump will have to exercise a lot of patience. You can realistically be looking at a one to two year time frame, perhaps even more.

Particularly if he/she starts to set down some specifics with the Dump such as wanting complete denticles, 'H' for Henshall visible and the presence of the original Spanish Dollar from which it was created, better known as the under-type. (We refer you to the brown area of the graph.)

But it is the grey area of this chart that is in fact the absolute killer. To our knowledge collectors have access to only TWO Good Extremely Fine/about Uncirculated Dumps, one struck using the “A/1” dies, the other using the rarer “D/2” dies; the latter of which was sold in 2016 for $275,000. (Refer our W J Davis Catalogue in Latest Catalogue.)

The 1813 Holey Dollar and its partner, the 1813 Dump, were the first coins struck in Australia. Not only are they very rare, but their fascinating history has made them two of the world’s most famous coins.

When a hole was punched in the centre of 40,000 Spanish Silver Dollars Governor Lachlan Macquarie effectively created two coins, the Holey Dollar and the Dump.

This clever measure provided an immediate 25 per cent profit on the purchase of the Silver Dollars, doubled the number of new coins in circulation and drastically reduced the likelihood of their being taken out of the colony.

Four distinctly different die combinations were employed in the striking of the Colonial Dump, classified as the A/1, D/2, C/4 and E/3. As you would expect, some dies are far rarer than others.

The most readily available is that of the A /1 and there are quite likely at least 500 specimens held in private hands. Next in line for scarcity is the D/2 with perhaps 200 available, followed by the E/3 with 15 and the C/4 with less than ten known.

While the E/3 and C/4 specimens are exceptionally scarce, they also are exceptionally crude and aesthetically very challenging. They are immensely interesting and definitely part of the Dump story; their demand however generally restricted to those collectors wanting to acquire a complete set of the different die combinations.

Their limited numbers and the crude state in which they appear have historians concluding that they were most likely trials, prepared before a design acceptable to Governor Lachlan Macquarie was approved.

The 1813 Colonial Dump is a much undervalued and underrated coin in the upper quality levels. It is in every respect a true Australian coin rarity.

In fact we would go even further to say that it is the coin that is most noticeably absent from the Browse and Buy Section of our web-site. "Our case rests".