The 'Tusculum' Holey Dollar, created from a Charles IV Spanish Silver Dollar that was issued at the Mexico Mint in 1791. Of particular note, the position of the counter-stamps. 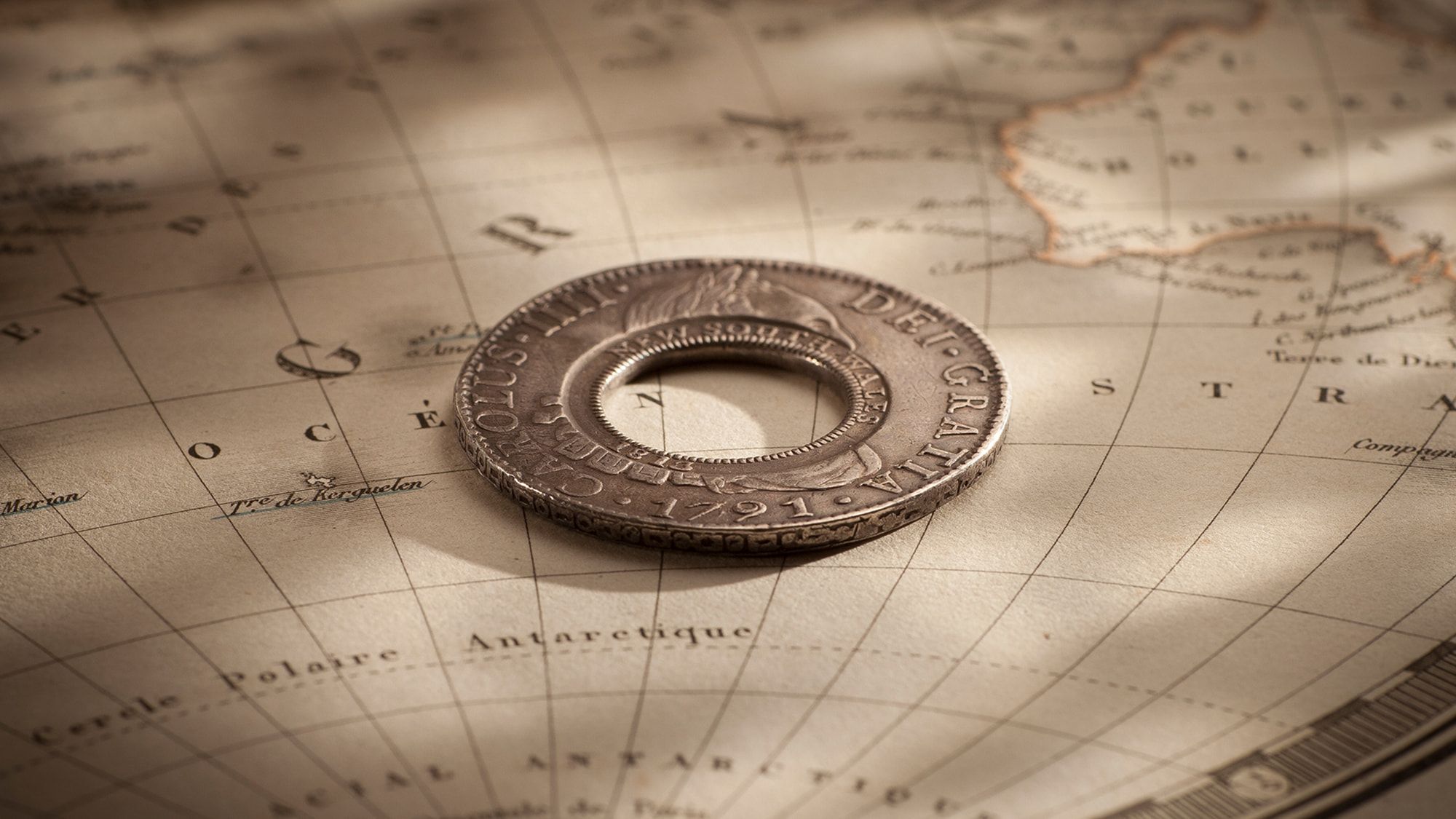 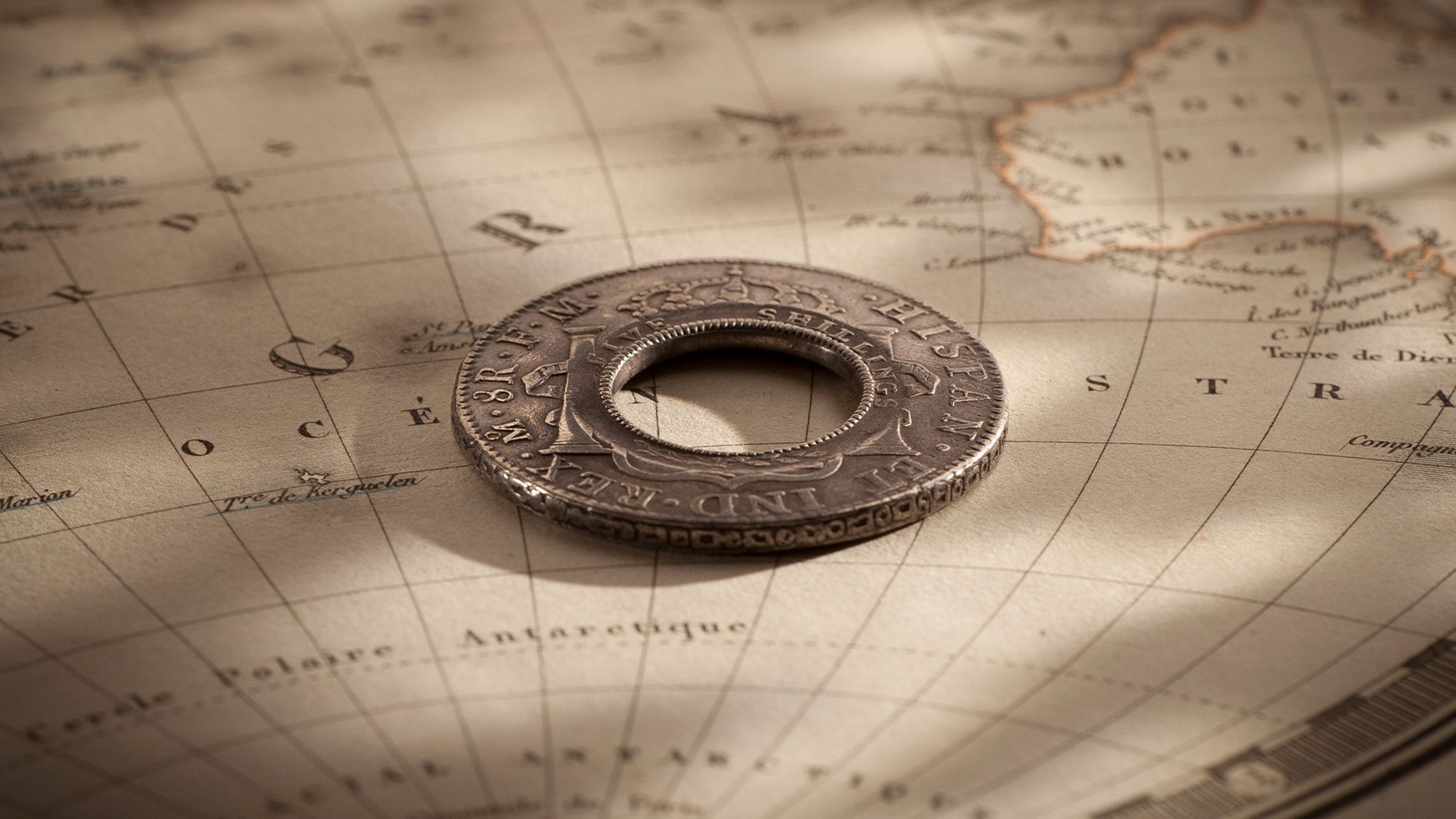 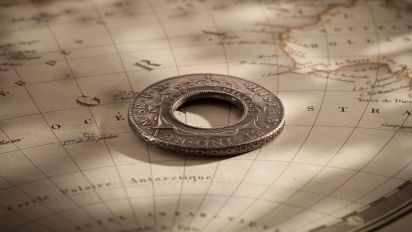 Rare coins have a narrative that brings history to life. Their story can be as much about the people that owned them as they are about their place in the nation's financial landscape.

The coin has traversed the globe. Family records confirm that William Long's daughter, Selina Cheeke, and her husband George Ashwin Cheeke, returned to England in 1886 taking the coin with them. Selina Cheeke gifted the Holey Dollar to her son, George Alfred Mosley Cheeke, when he emigrated to Canada in 1901. On his death in 1950, the coin was passed to son, George Arthur Creswell Cheeke and in 1968, the coin was ultimately passed to his son David Cheeke.

This Holey Dollar remained with William Long's descendants until 2017 when it was acquired by Coinworks.

It was an emotionally charged transaction for the seller, parting with an heirloom that had been in the family for nearly two hundred years. This Holey Dollar defined the family’s humble beginnings in the penal colony of New South Wales. Their fortunes were made in the colony and this coin symbolised their proud colonial heritage.

The Holey Dollar that was the star of the Royal Australian Mint's Exhibition.

Eleven of the nation's best Holey Dollars were on show at the Royal Australian Mint Canberra in 2019, their value a massive $5.5 million. Titled 'All That Is Holey', the Exhibition ran for two months and was hugely successful in attracting media attention. And visitors.

The Holey Dollar owned by emancipist William Long was one of the eleven coins displayed. It also was the piece singled out by the mint to be the focus of its promotions, the star attraction.

This Holey Dollar has a powerful history. The coin reflected the Royal Australian Mint's ideals that production - and collecting -  of coins is as much about today as it is about harnessing our history for future generations. 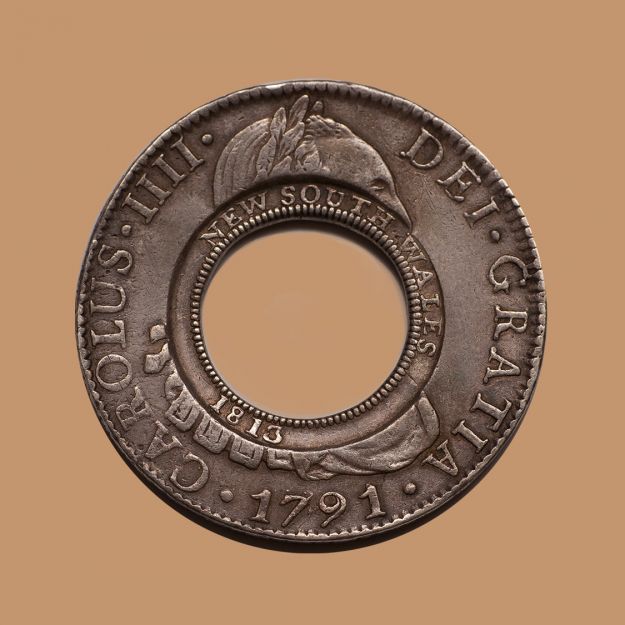 The counter-stamps 'New South Wales' and the date '1813' are in the same vertical vista as the date '1791'. Only five of the nearly three hundred surviving Holey Dollars (that number takes in private collections and museums) have counter-stamps that are vertically aligned. 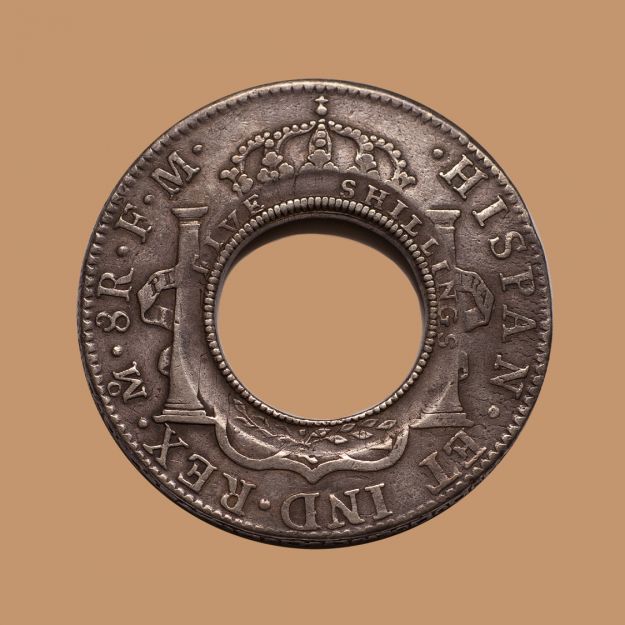 The value 'Five Shillings' is at the top which is the perfect position for the counter-stamps. Historians suggest that those Holey Dollars with vertically aligned counter-stamps may have been especially struck in a controlled environment.

Fundamentals of this Holey Dollar

When Mint Master William Henshall created this Holey Dollar, he grabbed a Spanish Silver Dollar that had been struck at the Mexico Mint in 1791. The dollar depicted the portrait of King Charles IV.

The coin was one of 40,000 Spanish Silver Dollars imported by Lachlan Macquarie to use as the basis of the colony's first currency.

Armed with a punch, Henshall cut a hole in the dollar, placing the holed coin between two dies. One die contained the elements ‘New South Wales’ and ‘1813’. The other die contained the denomination of ‘Five Shillings’, a double twig of leaves and an ‘H’ discretely placed at the juncture of the twigs, Henshall determined to leave his mark. These design elements are known as the counter-stamps.

Using the gravitational force of a simple drop hammer system, the design elements of the dies were stamped onto both sides of the holed silver dollar around the inner circular edge of the hole.

And it is at this point – and this point only – that the ‘holed’ silver dollar became the 1813 New South Wales Five Shillings. Better known as the 1813 Holey Dollar.

The optimum position for the counter-stamps

The counter-stamps of this Holey Dollar are in the optimum position with the issuing authority 'New South Wales' and the date '1813' in the same vertical vista as the date '1791'. And on the flip side, the value 'Five Shillings' is at the top, perfectly aligned. This is rarely seen and is the best possible position of the counter-stamps.

A study of the surviving Holey Dollars reveals that Henshall's application of the counter-stamps was wildly random, that the holed dollar was not placed in a particular position between the dies. And it obviously didn't matter which side of the holed dollar was facing up. Speed was of the essence. Precision was simply not required which is why the counter-stamps of most Holey Dollars are 'all over the shop'.

A vertical alignment of the counter-stamps, such as we see in this coin, is rarely evident.

Only five of the nearly three hundred surviving Holey Dollars (that number takes in private collections and museums) have counter-stamps that are vertically aligned.

Significance of the date 1791

King Charles III of Spain died in 1788. It took two years for the image of the new King Charles IV to reach the mints in the Americas, his portrait first appearing on the Spanish Silver Dollar in 1791.

Only three privately owned Holey Dollars were created from a Spanish Silver Dollar dated 1791. Four are held in institutions, one specimen held in the Museum of Victoria with three held in the State Library of New South Wales.

Copy of the 'All That is Holey' Souvenir Catalogue Royal Australian Mint Exhibition Canberra, 2019

Letter dated 16 May, 1939 from the Family Herald & Weekly Star (Canada’s National Farm Magazine) offering to purchase the “Holy Dollar” (note the spelling of 'Holey') for $10.

It is a statement of fact that most Holey Dollars come well worn. The Spanish Silver Dollar was the world's great trading coin, the shipment - a bulk order of 40,000 coins - coming from the East India Company in Madras. Macquarie did not set any quality parameters on his order, more interested in quantity than quality,

This Holey Dollar is an exception.

The original 1791 Spanish Silver Dollar from which this Holey Dollar was created is graded in the premium quality levels of Good Very Fine indicating that it underwent slight circulation before the hole was cut into it in 1813.

And this is a point worth noting. If the dollar had been struck in '1810' let's say, we could accept that slight circulation might occur before the coin was holed by William Henshall in 1813. (A three-year window)

But the original Spanish Silver Dollar of this Holey Dollar was struck in 1791 allowing twenty-two years of commercial usage before William Henshall grabbed it out of a barrel.

it's a fluke that the coin survived the twenty-two years in such a relatively untouched state!

The extent of usage of the Holey Dollar after it was released into circulation is evidenced by the wear to the counter-stamps, the over-stamping around the inner circular edge … 'New South Wales', '1813' and 'Five Shillings'.

The counter-stamps of this Holey Dollar are graded in the premium quality levels of Good Extremely Fine.

Above, an advertisement from The Sydney Gazette
Wednesday 2 July 1828.