The Holey Dollars of the late Philip Spalding. 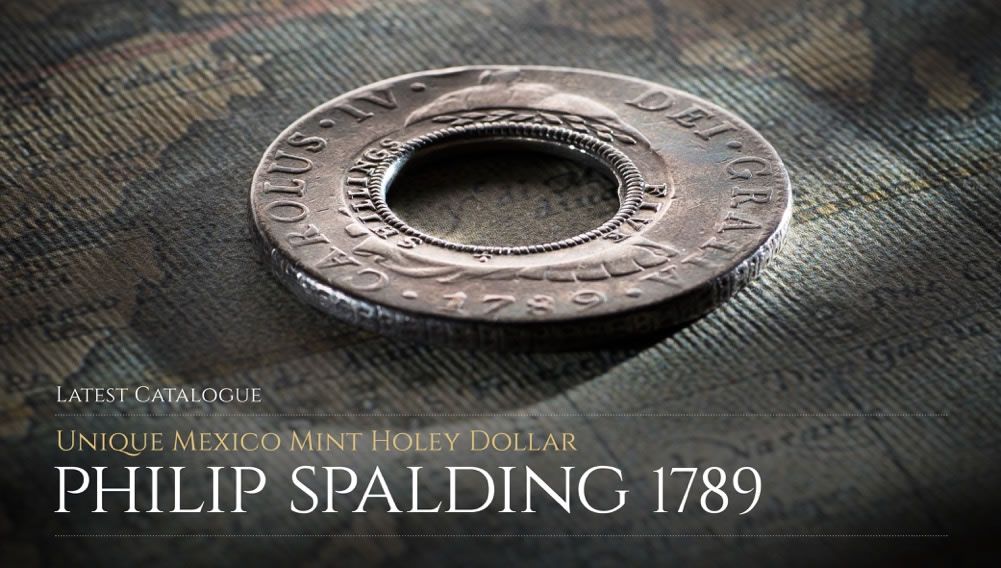 We have just acquired two Holey Dollars from the collection of the late Philip Spalding. Both are rare, one of them is unique. And both are affordable. They were held by the Spalding family for more than four decades.

The two coins are featured in Browse & Buy. And in our latest Catalogue.

Both Holey Dollars were struck from Spanish silver dollars dated 1789. And each Holey Dollar depicts the portrait of the deceased monarch King Charles III, who died in 1788.

The first Holey Dollar is referenced 1789/1 in the Mira Noble book ‘The Holey Dollars of New South Wales’ and is a unique type of Mexico Mint Holey Dollar.

The Spanish King Charles III died in December 1788. The normal protocols would see the removal of the monarch’s portrait from his coinage, and its replacement with the effigy of the new king. But the news of the death of Charles III did not reach the Spanish colonies until March 1789.

The colonial mints unknowingly continued to produce coinage with the legend and portrait of the deceased king oblivious to the death of their monarch.

Of the surviving Holey Dollars, only two were struck from silver dollars that feature the legend and portrait of the deceased King Charles III.

The second Holey Dollar is referenced 1789/2 in the Mira Noble book ‘The Holey Dollars of New South Wales’ published in 1988.

This Holey Dollar was struck from a silver dollar dated 1789 and depicts the portrait of the deceased monarch King Charles III, who died one year earlier, in 1788. It also features the legend Carolus IV, to acknowledge the new monarch, thereby differentiating it from the previous Holey Dollar.

This Holey Dollar is one of only eight privately held examples that depict the portrait of Charles III and the legend Carolus IV.

Together these Holey Dollars chronicle the limitations of communications in this era and the challenges of the colonial mints wishing to maintain silver coin production while at the same time observing the currency protocols required for the passing of a monarch.

Both Holey Dollars are photographed and detailed in Spalding’s book, “The World of the Holey Dollar”. They were highly regarded by Spalding to the extent that they were featured in his book, in the chapter titled ‘The Top Dollars’, page 209 and 210.

Philip Spalding’s passion for the Holey Dollar extended far beyond ownership. He authored what is still to this day regarded as the ultimate reference on the history of Australia’s Holey Dollar. Published in 1973, ‘The World of the Holey Dollar’ is viewed as his greatest legacy.

History of the Holey Dollar

The silver dollars imported by Macquarie, and ultimately the Holey Dollars that were created from them, chart the course of the Spanish monarchs commencing with Ferdinand VI, Charles III, Charles IIII and Ferdinand VII including the tumultuous period in 1808 when Ferdinand VII exited the throne to be replaced by Joseph Bonaparte, brother of Napoleon Bonaparte.