The 1813 Holey Dollar made famous as the front-cover coin of Philip Spalding's book, 'The World of the Holey Dollar'. 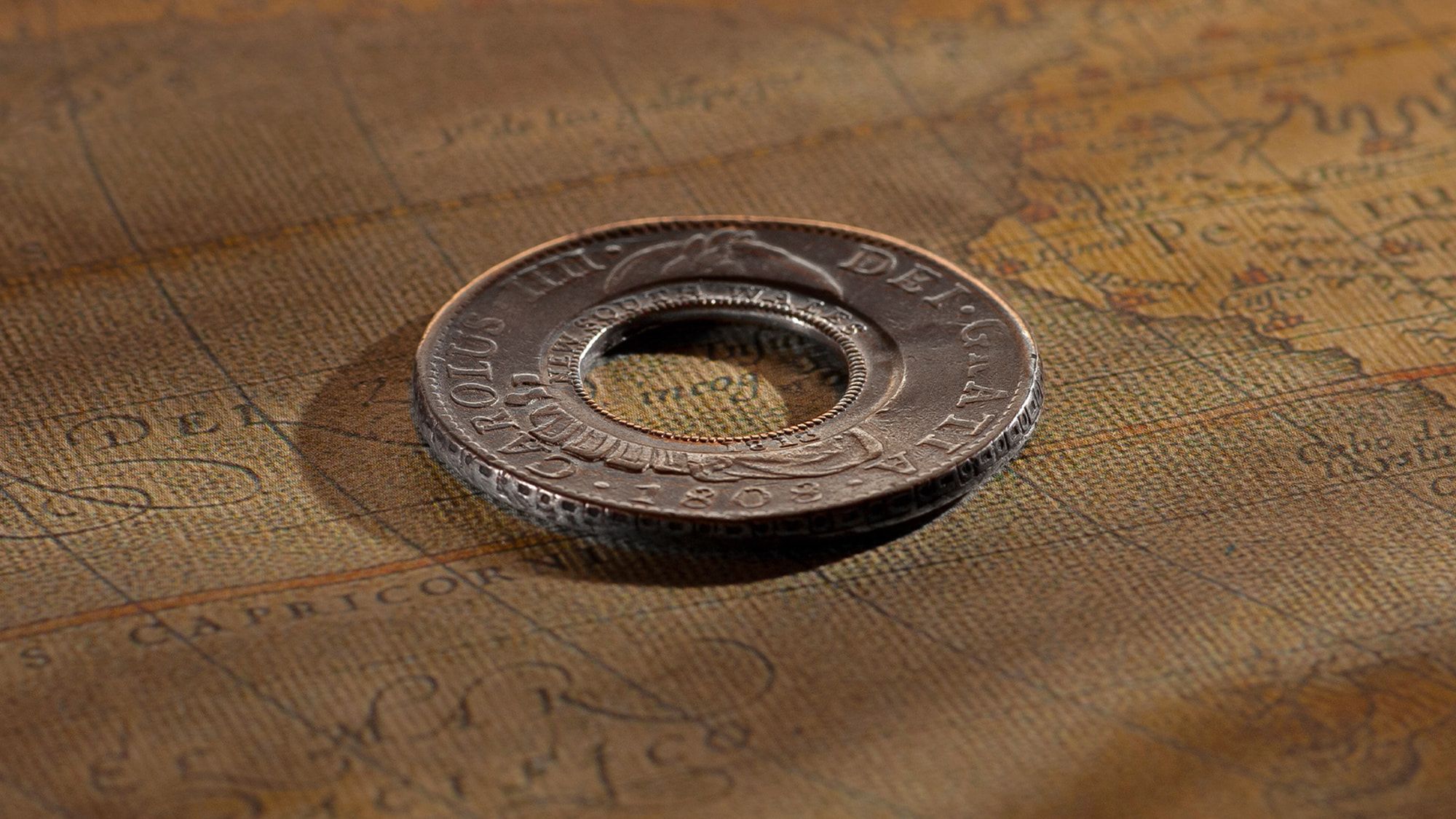 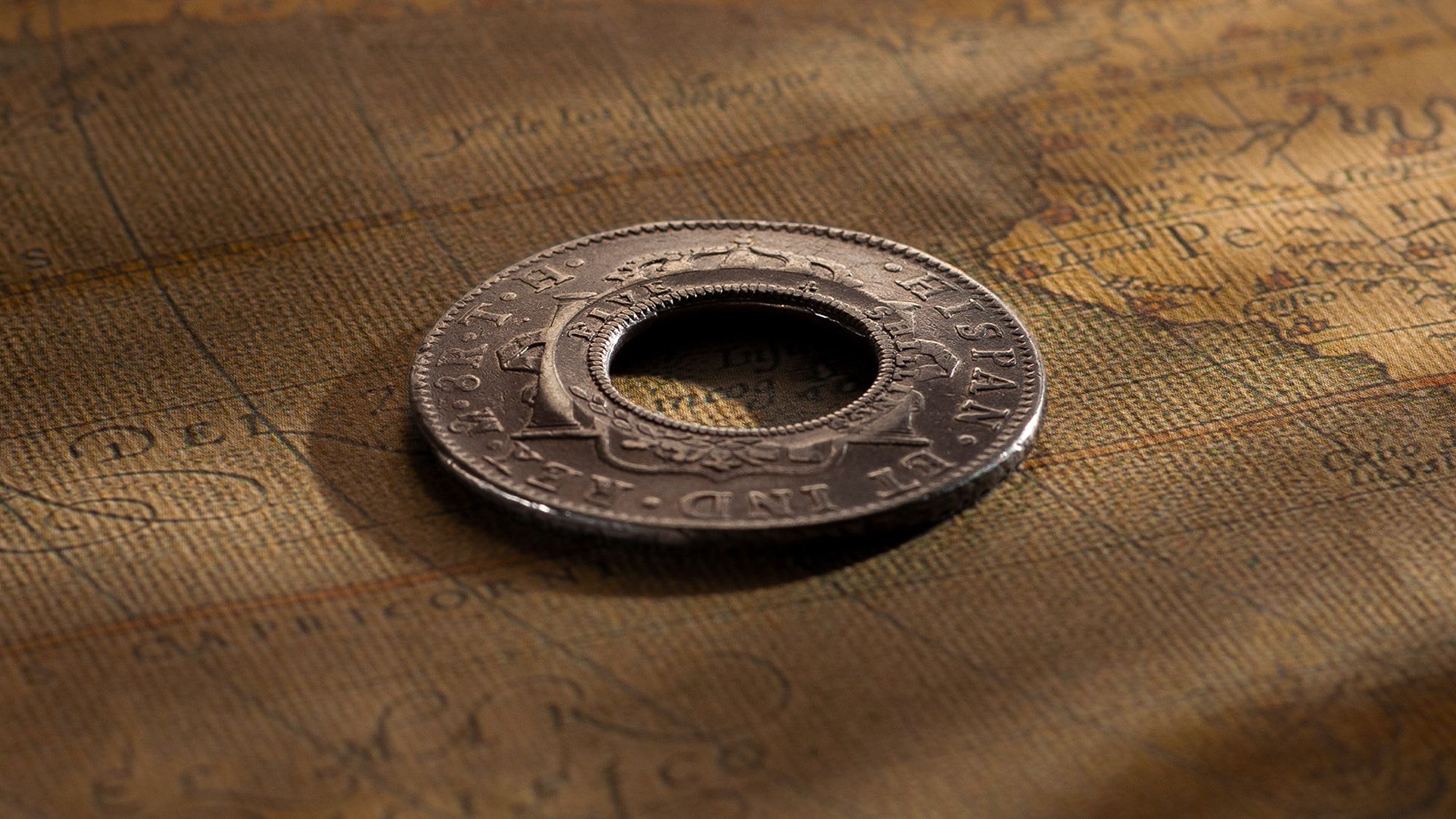 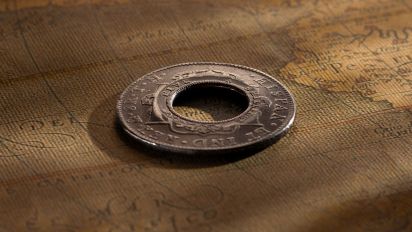 The fundamentals of this 1813 Holey Dollar.

When William Henshall created this Holey Dollar in 1813, he grabbed a Spanish Silver Dollar that had been struck in 1808 at the Mexico Mint featuring the portrait of King Charles IV.

Committed to the task of creating holey dollars from silver dollars, he cut a hole in the coin and continued the minting process by over stamping the inner circular edge of the hole with the words New South Wales, the date 1813 and the value of five shillings. That's the point at which Henshall created the 1813 Holey Dollar.

It is a statement of fact that most Holey Dollars are today found well worn. No quality parameters were set on Macquarie’s shipment of 40,000 silver dollars. He wanted quantity. Not quality. This Holey Dollar is the exception.

The original 1808 Spanish Silver Dollar from which this Holey Dollar was created is graded in the premium quality level of Good Very Fine indicating that the coin underwent minimal circulation before the hole was cut into it.

The extent of usage of the Holey Dollar after it was released into circulation is evidenced by the wear to the counter stamps, the over-stamping around the inner circular edge … New South Wales, 1813 and Five Shillings.

The counter stamps of this Holey Dollar are graded in the premium quality levels of About Extremely Fine.

Optimum position of the counter stamps.

Published in 1973 it is still to this day a literary marvel and a major reference on Australia's colonial history and the Holey Dollar. (A signed "First Edition" copy of Spalding's book - numbered '15' - and inscribed by the author will be provided with the sale of this coin.)

This Holey Dollar is also photographed and detailed on page 61 of "The Holey Dollars of New South Wales" by Messrs. Mira and Noble.

Only a handful of collectors can ever lay claim to having their Holey Dollars in both books.

This Holey Dollar has been owned by some of the most esteemed Australian collectors of our time including Roy Farman, Ray Jewell and Philip Spalding.

But it is the latter collector, Philip Spalding, that has made this coin famous.

Philip Spalding is unequivocally one of the most revered names in Australian numismatics. He was passionate about the Holey Dollar and he owned more than a dozen examples. His passion extended far beyond coin ownership for he authored the book, ‘The World of the Holey Dollar’. The book was his greatest legacy and one of the finest contributions to the study of numismatics.

And that's not to downplay the names Roy Farman, Ray Jewell and Colin Pitchfork, also former owners of this Holey Dollar.

An industry develops because of the involvement of collectors and dealers working together to the advancement of a market. These four collectors, Farman, Jewell, Pitchfork and Spalding were actively involved in advancing the industry from the 1940s through to the 1980s.

And they each shared the pleasure of ownership of this quality Holey Dollar. 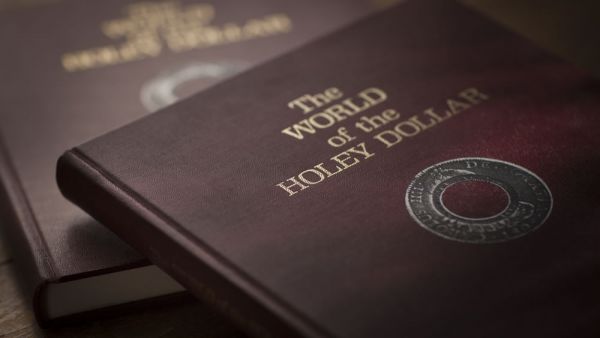 A signed "First Edition" copy of Spalding's book - numbered '15' - and inscribed by the author will be provided with the sale of this Holey Dollar. 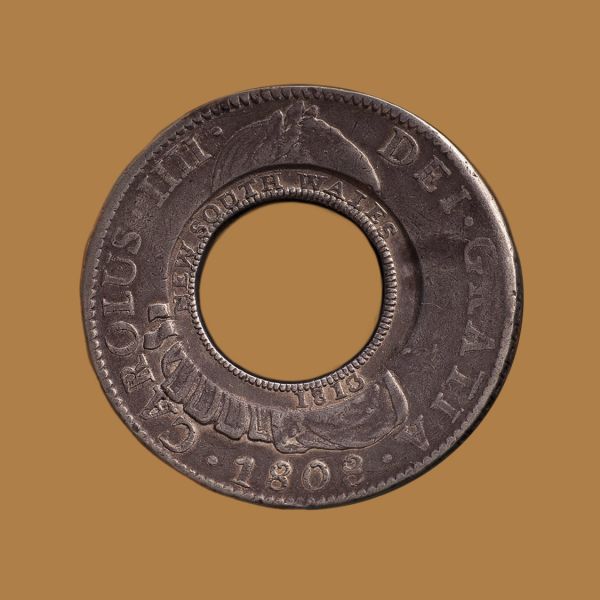 This Holey Dollar is one of the very few struck with the counter stamps 'New South Wales' and '1813' in the same vertical vista as the date '1808'. Aesthetically, this is the optimum position of the counter stamps and perhaps the very reason why it was selected to grace the front cover of Spalding's book. 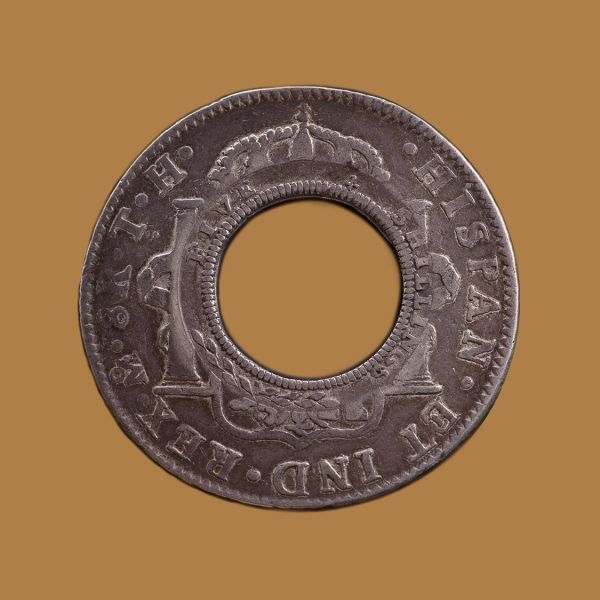 Again we note that the counter stamps 'Five Shillings' are aesthetically well positioned on this Holey Dollar.

The Holey Dollar is one of Australia’s most desirable coins. Its status as the nation's first coin ensures that it will never be forgotten and, as time passes, its historical value can only increase.

Talk to those fortunate enough to own one, either private collectors or institutions such as Macquarie Bank, National Museum of Australia and the Mitchell Library, and they will tell you that the Holey Dollar is viewed as the jewel in their collection. And that statement is made irrespective of the quality level.

The coin is rare. And the coin is steeped in history. And yet it is refreshingly current.

The ingenuity of Governor Lachlan Macquarie in creating our first coin is reflected in the naming of the Macquarie Bank and the bank’s ultimate adoption of the Holey Dollar as its logo.