Each half sovereign in this seven-coin collection bears the Tom Hadley / Quartermaster tag.

It took dealer Barrie Winsor more than 22 years to accumulate Tom Hadley's gold coin collection to a quality level that satisfied both Winsor and Hadley's aspirations.

Winsor's final shopping spree for Tom Hadley occurred in 2005, in Melbourne, at the Reserve Bank of Australia (R.B.A.) Auction.

The R.B.A. Auction presented Winsor with the opportunity to add new varieties to Hadley's Collection. And the chance of upgrading the quality of existing coins within his holding.

Barrie Winsor has always been emphatic in his view that collecting top quality coins is not always about having the financial resources.

Collecting is a journey. His view is that buyers need to exercise patience because some pieces are simply not readily available. It can be years (if not decades) before a top quality, rare date half sovereign comes onto the market.

He also added his belief that collecting is about celebrating when the right coin comes along. 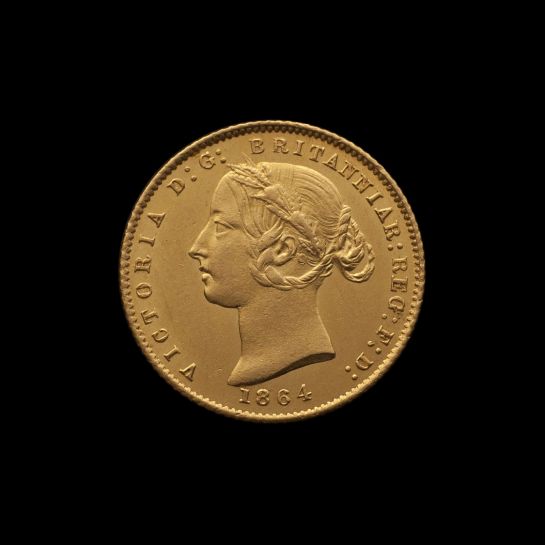 This is a cameo-perfect example of the 1864 Sydney Mint Half Sovereign. The edges are strong and unblemished. The design is highly detailed against the backdrop of smooth fields.

Amazing given the factory environment in which it was minted.

The coin was struck at the nation’s first mint, the Sydney Mint, and depicts the classically Australian Sydney Mint reverse design.

The reverse design ran from 1855 until 1870 and has confounded historians with the use of the word 'AUSTRALIA'. The colonies did not unite under the banner 'Australia' until Federation in 1901. Furthermore, it was the only era that the word 'AUSTRALIA' appeared on our half sovereigns.

The obverse design features a young Queen Victoria wearing a sprig of Australia's native flower, the banksia, in her hair. We refer to it as the Type II portrait design and it ran from 1857 until 1866.

It is statement of fact that Uncirculated quality Sydney Mint Half Sovereigns are extremely rare. 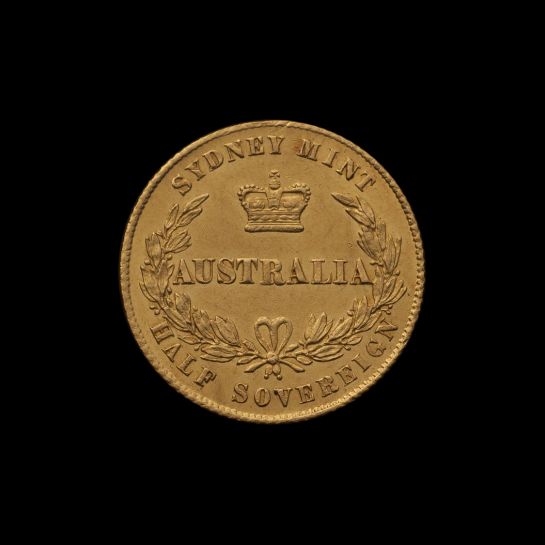 So let's quantify the term 'rare'.

We can count on the fingers of two hands the number of Sydney Mint Half Sovereigns we have sold in choice quality.

And in making this comment, we are not just talking about the year '1864'. We are referring to the entire Sydney Mint era of 1855 up to and including 1866.

This 1864 Sydney Mint Half Sovereign is a great rarity. We note that in a forty-plus year career we have sold only one other of the same date and in the same quality.

1864 - and what a year it was. The most populated colony, Victoria, had an estimated population of 598,003, with N.S.W. coming in second recording 390,230 inhabitants. The least populated colony was Queensland with 73,578 inhabitants. Tasmania was already showing itself to be a colony rich in produce with the first trout and salmon hatched at New Norfolk, Tasmania, from imported eggs. Foxes were liberated in Victoria by the Melbourne Hunt Club. Australia’s first cook book was published and while it included many traditional recipes, local ingredients were also featured. Dishes such as ‘slippery bob’. Battered kangaroo brains fried in emu fat. 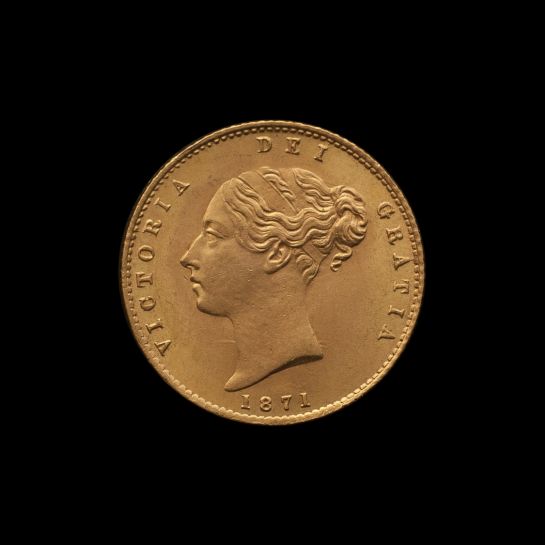 This 1871 Half Sovereign was struck at the Sydney Mint and introduced a brand-new obverse and reverse design for Australia’s half sovereign series.

At the time, the Sydney Mint was Australia's only operating mint. The Melbourne Mint opened on 12 June 1872 but did not commence striking Australia's half sovereigns until 1873. 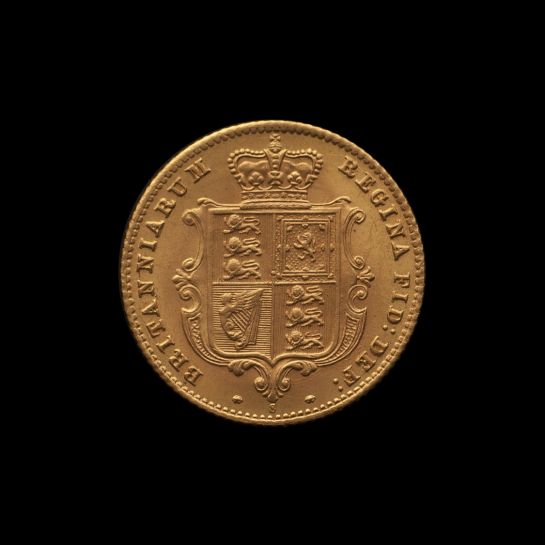 A.C.A. gave it the ultimate 'thumbs up' by placing the coin as the sole feature item gracing the front cover of their Catalogue of the famous Reserve Bank of Australia (R.B.A.) Auction conducted in 2005. 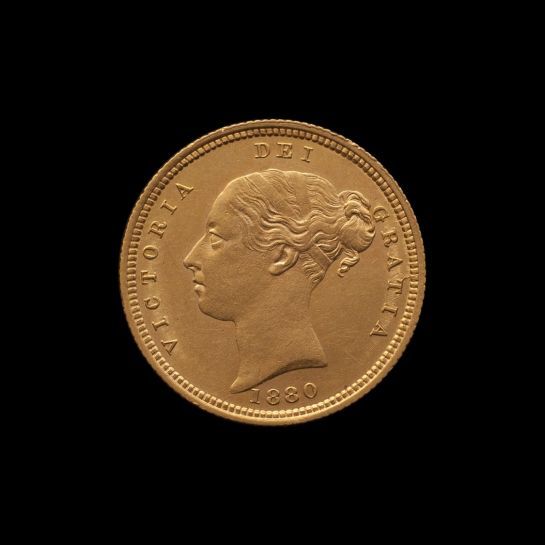 This 1880 Half Sovereign was struck at the Sydney Mint and depicts the Young Head portrait designed by William Wyon and the Shield design created by Jean Baptiste Merlen.

From 1871 until 1879, the Sydney Mint enjoyed robust half sovereign production issuing more than 1 million coins.

A new decade dawned and in 1880, the Sydney Mint experienced a dramatic drop in half sovereign production, issuing only 80,000 coins.

That's a bonus for collectors.

The affect today is that in any condition, the 1880 Sydney Mint Half Sovereign is a rare coin. But it is excruciatingly rare in the Choice Uncirculated quality offered here. 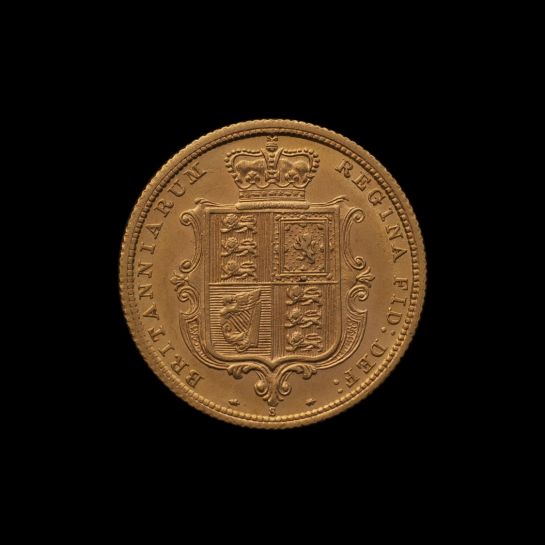 This is a cameo-perfect example of the 1880 Half Sovereign. A stunning coin, visually impactful with superb detail, smooth fields and much original gold lustre.

In a recent conversation, Winsor re-affirmed that in the many years he was involved in the industry, he had not seen finer.

1880 - and what a year it was. Gold was discovered at Margaret River, Northern Territory by David Tennant, prospector, publican and store owner. The discovery inspired massive Chinese migration. Who hasn't eaten a 'Cherry Ripe' or a 'Freddo Frog'? Confectionery Company, Macpherson Robertson began making their prized treats in Fitzroy, Melbourne, in 1880. 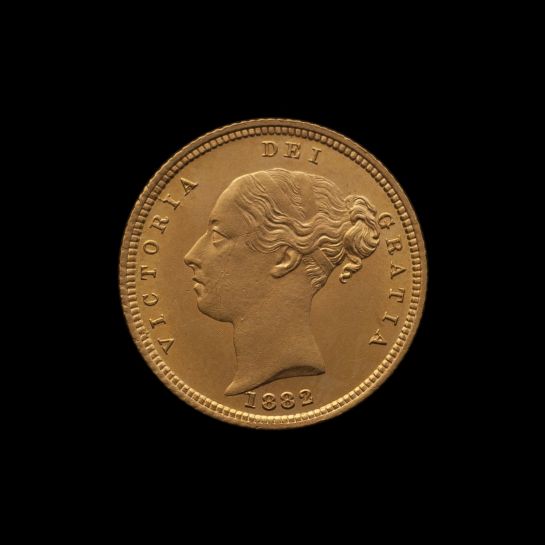 Dealers and collectors alike know the 'rare' dates in the Australian coin series and can reel them off at the drop of a hat.

The coin is excruciatingly rare. 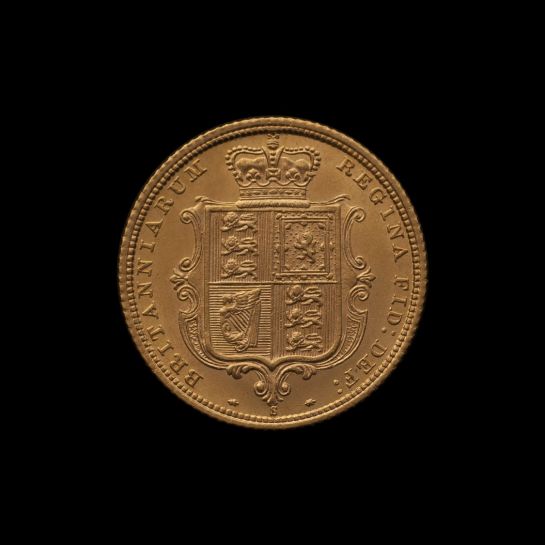 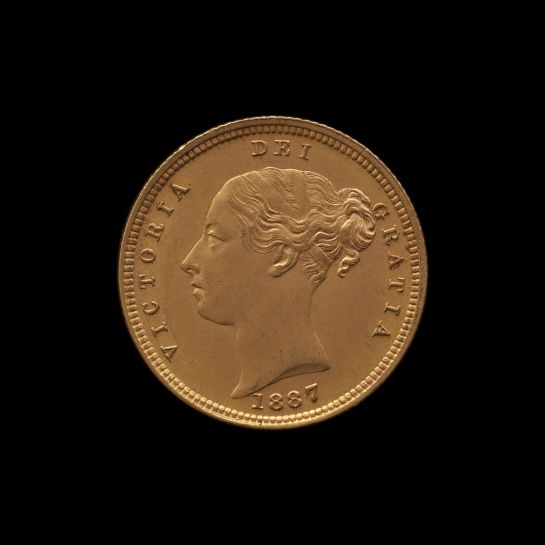 Barrie Winsor had the privilege, and the pleasure, of cataloguing the Reserve Bank of Australia (R.B.A.) inventory that was sold by Australian Coin Auctions in 2005.

Right from the outset Winsor had this 1887 Young Head Half Sovereign in his sights, pegged as one of the absolute finest of one of the key coins in the Australian half sovereign series.

He was not alone is his assessment of the coin and was presented with strong opposition at the auction, the coin eventually selling for $61,000, almost double the pre-auction estimate of  $32,500.

The first is the mint, Melbourne or Sydney? The former is far rarer. The second qualification is the design. In 1887 a new half sovereign portrait design was introduced for Queen Victoria's Golden Jubilee to mark the fiftieth anniversary of her ascension to the British throne (1837 - 1887). 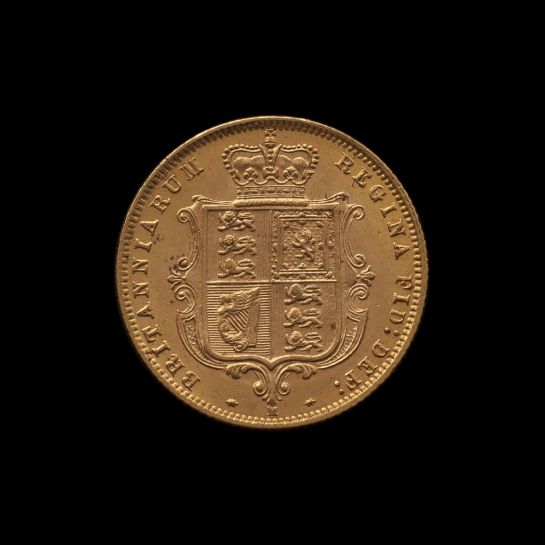 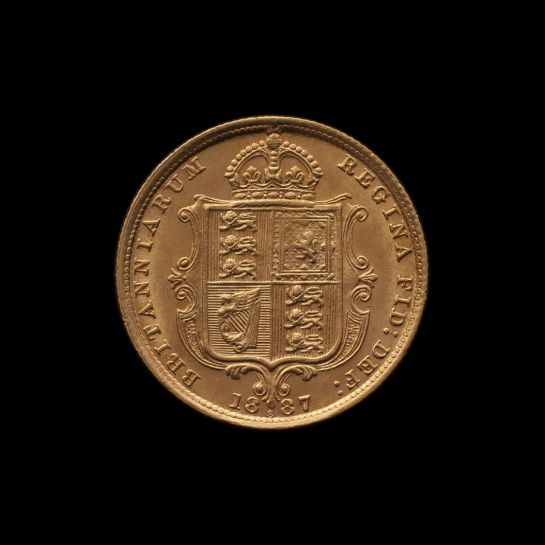 This superb Jubilee Half Sovereign reflects the Barrie Winsor touch. And the Quartermaster aspirations to acquire the very best.

Choice Uncirculated with superb details, unblemished edges and smooth fields, the coin was acquired from the Reserve Bank of Australia Auction held in 2005. 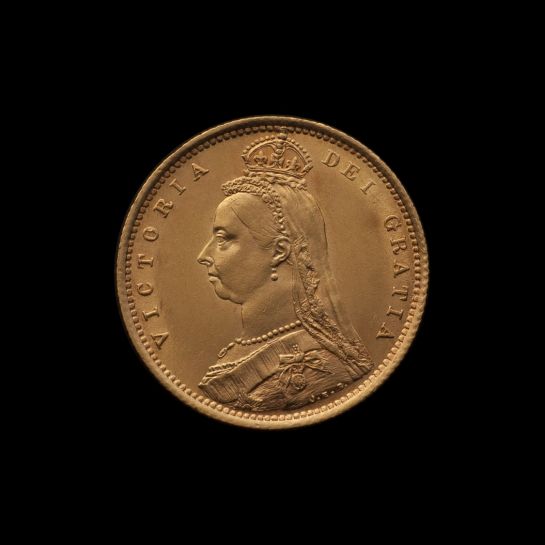 1887 - and what a year it was. The estimated population of Australia was 2,881,362 with New South Wales and Victoria almost neck and neck, each with just over 1 million inhabitants. Western Australia, the last penal colony to be settled, had 43,820 inhabitants. Gas bath heaters were introduced in Australian homes and the Horse tramway started in Ballarat. Queensland's railways reached the New South Wales border at Wallangarra and the Chaffey Brothers made an agreement with the South Australian Government to establish an irrigation system at Renmark. 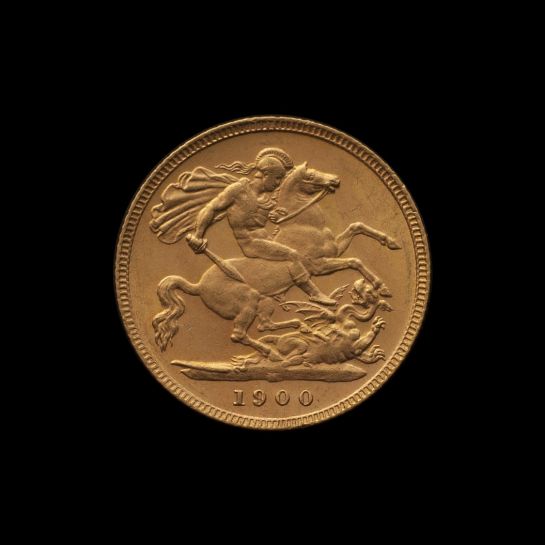 This coin is a superb 'turn-of-the-century' Veiled Head Half Sovereign from the Melbourne Mint.

It features the portrait of Queen Victoria designed by T. Brock and the reverse design of St. George & the Dragon by Italian gem-engraver Benedetto Pistrucci.

Acquired from the Reserve Bank of Australia Auction held by Australian Coin Auctions in 2005 where it sold for $10,500 on a pre-auction estimate of $6000. 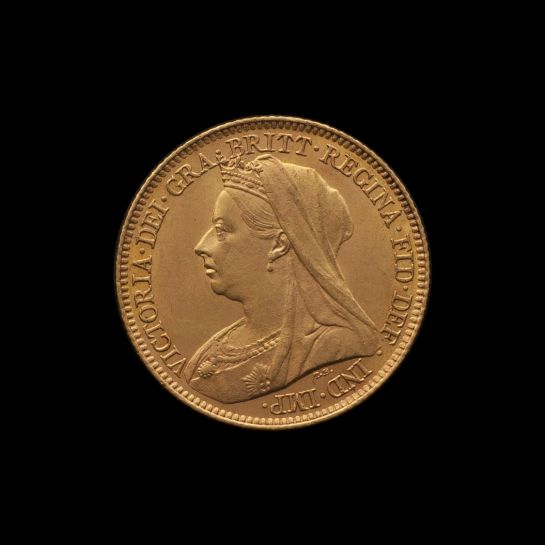 1900 - and what a year it was. One year before Australia's Federation and electric lighting was installed on Adelaide streets. State Labour politicians met in Sydney to formally establish the Federal Labour Party. The first Australian contingents of naval volunteers set sail for China to assist British and international troops during the Boxer Rebellion and natural gas was found at Roma in Queensland