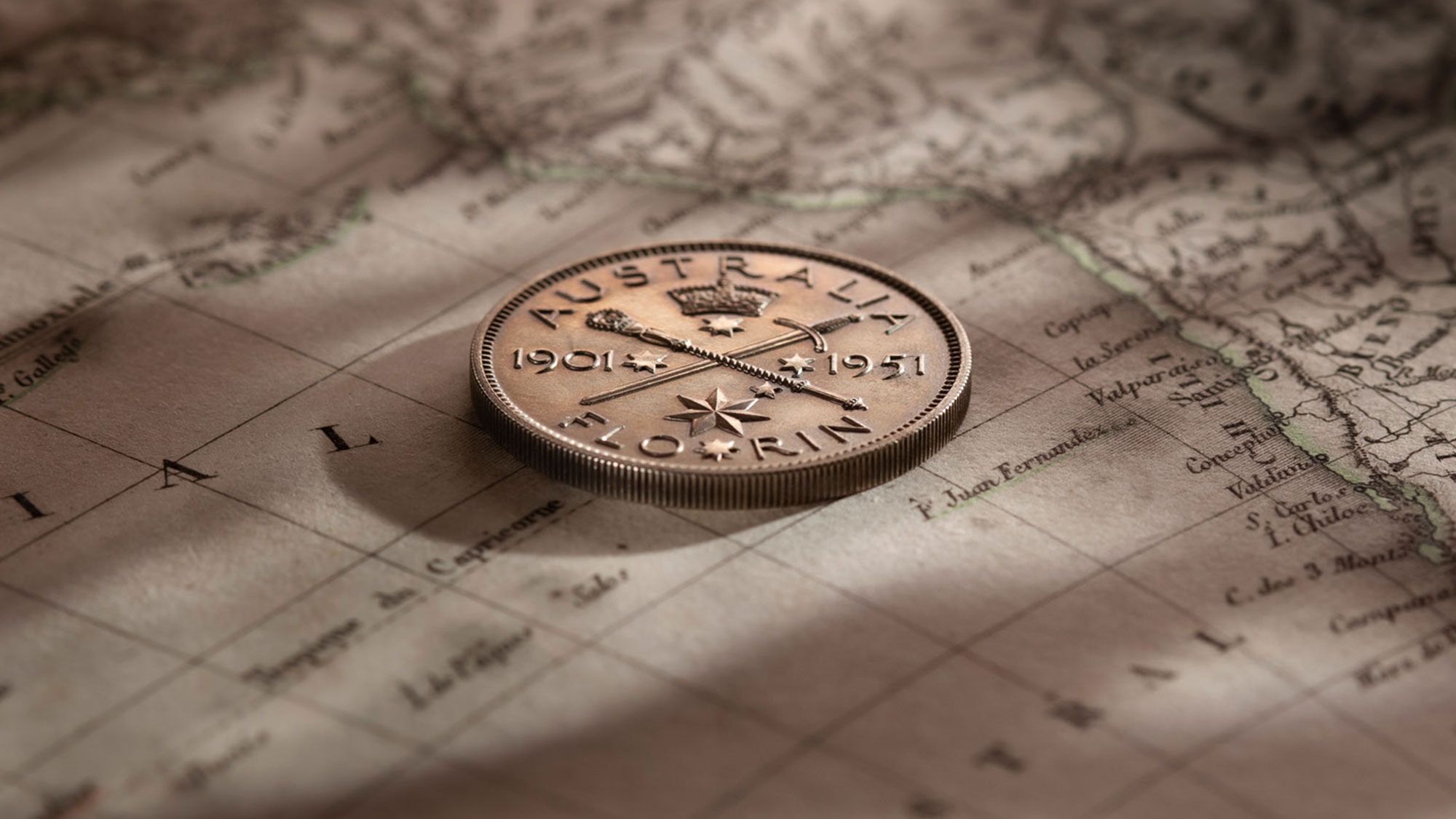 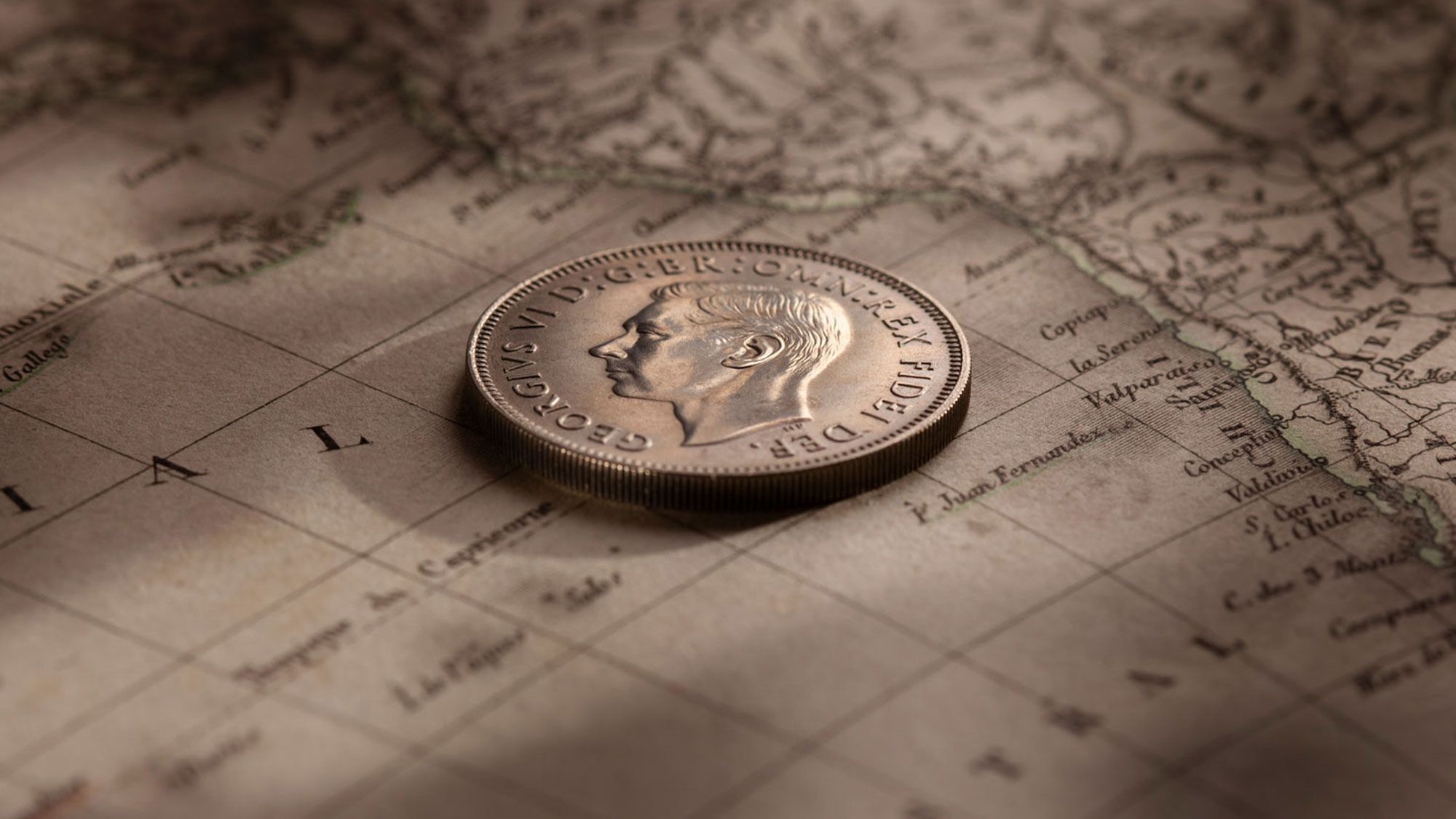 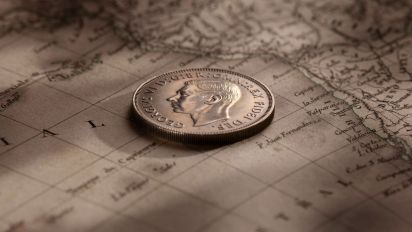 Reverse Description - a mace and sword crossing below a crown and above the Federation Star with the stars of the Southern Cross worked through the design.

Australia became an independent nation on 1 January 1901 when the British Parliament passed legislation allowing the six Australian colonies to govern in their own right as part of the Commonwealth of Australia.

The celebrations continued fifty years later with the striking of a commemorative coin, the 1951 Federation Florin.

Treasury issued two million commemorative florins in 1951 to celebrate the 50th year of Federation. The coins were struck at the Melbourne Mint using planchets comprised of 50 per cent silver.

The designs carried the normal portrait of King George VI and a rather symbolic reverse design by William Leslie Bowles featuring a crown above a crossed sword with the Southern Cross worked through the design.

The coins are extremely rare with only three held in private collections and are very much sought after by collectors.

The 1927 Canberra Florin - the Canberra Florin was struck by the Melbourne Mint for the opening in 1927 of the first Parliamentary buildings in the national capital, Canberra. Two million florins were released into circulation. The mint was also commissioned by Treasury to strike 400 florins to Proof quality. The issue was not a sell-out and a significant number of proofs were re-melted after failing to find a home. Respected author Greg McDonald suggests the actual figure could be as low as 150.

The 1934/35 Melbourne Centenary Florin - the Melbourne Centenary Florin was the first Australian coin to have a dual date, commemorating the 100th anniversary of the first permanent settlement of Portland Bay in 1834 in what is now the Western District of Victoria. And the 100th anniversary of the settlement of Melbourne in 1835 in what is now the northern suburbs of Melbourne. The coin was sold for three shillings with the extra shilling premium helping to pay for public celebrations. And while the initial mintage was intended to be 75,000 only 54,000 coins were struck. A number of examples are found today in specimen quality and a handful of proof quality examples also exist.

The 1901/1951 federation Florin - the reign of George VI involved the war years and the aftermath of a war recovery and offered few opportunities for nation's to breakout and celebrate. The Australian Government seized the moment in 1951 to celebrate the 50th anniversary of Federation with the release of two million Federation Florins. (And who says Governments don’t use coinage as propaganda.) Four proof quality examples are known, three in private hands and one in the Museum of Victoria where it is currently held. (And featured on their web site.)

The 1954 Royal Visit Florin - two million florins were struck in 1954 to celebrate Queen Elizabeth’s first visit to Australia. Two proof examples are held in the Museum of Victoria and one is privately held.