Last financial year was a bumper year for Coinworks with sales 50 per cent up on the previous. Five months into the new financial year, 2018/2019, and we are now on target for a further boost in sales revenue. 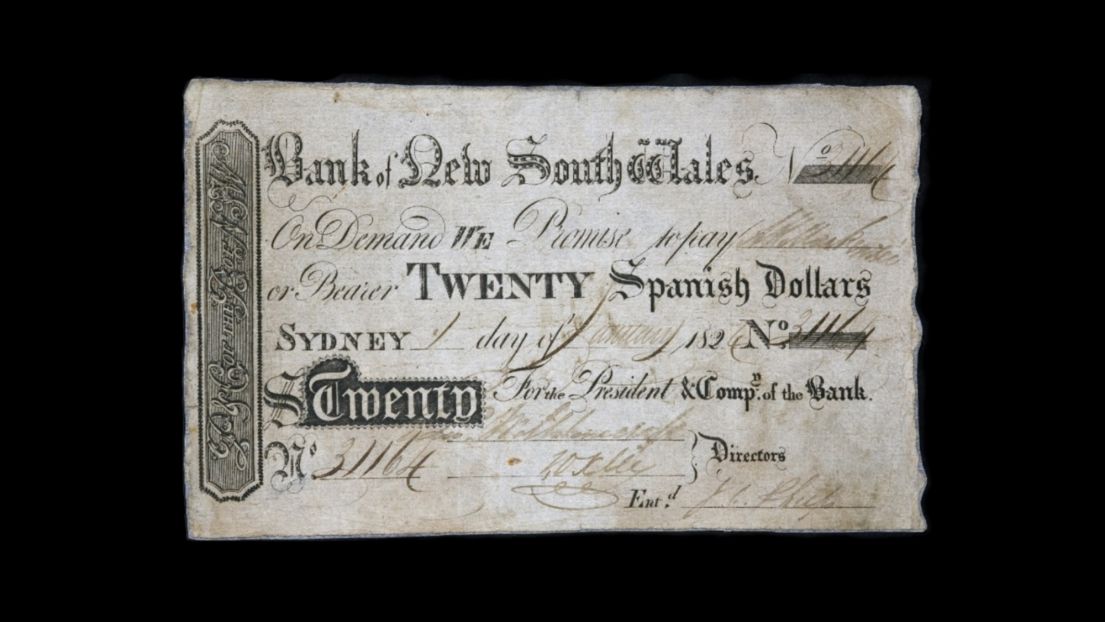 History has played a strong role in buyer’s selections, as has rarity. An acknowledged, well documented provenance has also carried a lot of weight.

These are all very important names that have sway with current buyers.

Stand out areas include Holey Dollars and Pre-decimal Proof gold. Sales of Square Pennies and 1930 Pennies have also been prominent.

As have top quality Gold Sovereigns and Gold Half Sovereigns, reflecting the overwhelming appeal of gold to collectors.

CURRENCY DEFINES OUR PAST.

We believe that Australia’s coins and banknotes define our glorious history. Our clients obviously share our view. Consider … 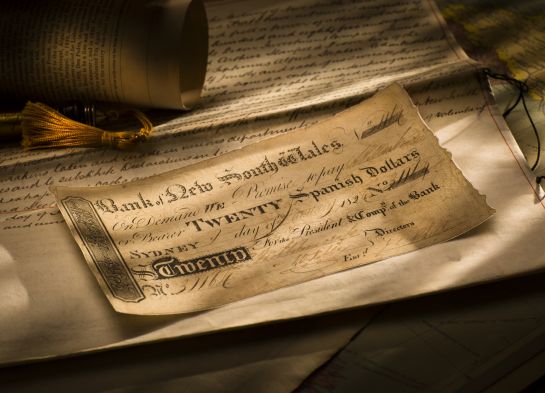 But what is little known is that in 1822 Governor Sir Thomas Brisbane (after whom the capital city of Queensland was named) took all the accounts and bills of the Colony of New South Wales onto a dollar standard, rejecting the British Pounds, Shilling and Pence monetary unit.

The Bank of New South Wales, the only operating bank at the time, was forced to issue its banknotes in Spanish Silver Dollars to comply with the Government’s reforms.

Now you will find evidence of this momentous monetary policy change deep in the archives of Westpac (formerly the Bank of New South Wales) through an examination of their ledgers and its bank records. That’s if you are fortunate enough to have access to their archival records.

Or you can read about it. This exciting period in Australia’s history is documented in many history books.

One of our clients however likes to “live” history and secured the Bank of New South Wales Spanish Twenty Dollars offered in November. Issued on 1 January 1824, hand signed by the bank’s Directors John Oxley and Edward Wollstonecraft, it is tangible evidence that Australians were using dollars as the basic unit of currency in the 1820s, well before 1966 and well before the Royal Australian Mint ever came on board.

And for collectors it is unique.

Alongside the Commonwealth of Australia Ten Shillings M000001 we regard it as one of Australia’s most powerful and historical banknotes. Barrie Winsor, who instigated the return of M000001 from the United Kingdom back to Australia in the year 2000 concurs with our view.

HOLEY DOLLARS ARE BEING SNAPPED UP AT ALL DOLLAR LEVELS.

Coinworks clients have expended more than one million dollars on Holey Dollars over the past five months.

That outlay involved four coins. Two of the four were well recognised and high dollar value Holey Dollars: the famous Hannibal Head Holey Dollar and the equally famous Ferdinand VII Holey Dollar that appears on the front cover of the Mira Noble Catalogue.

That Holey Dollars have appeal at all dollar levels is evidenced by our sale over the past five months of two well circulated examples that sold for $95,000 and $49,500 respectively. And a reflection on the keenness of buyers with both coins selling within one week of their offering.

Holey Dollars have been a very competitive area of the market both at a retail level, where multiple enquiries are received on the one piece. And in the auction environment where numerous bidders are noted.

Consequently, prices for Holey Dollars have moved ahead. Across all quality and dollar levels.

But the push for Holey Dollars is just not restricted to the lesser dollar value examples.

Several mid-tier Holey Dollars have been offered overseas recording price levels that can only be described as astounding. One Australian dealer commented to us that while he was registered to bid by phone in a recent London Auction, he didn’t get the opportunity to participate.

Frenetic room bidding activity saw the price move in an instant well beyond his upper limit.

There is no doubt that Holey Dollars at this dollar level have the clout to move very much higher. The former owner of the Madrid Collection of Australian Rare Coins maintained that the famous Madrid Holey Dollar (after which his collection was named) would be the first Holey Dollar to hit the million mark. We sold the coin on his behalf in 2015 for $550,000 so his comments can only be regarded as lacking self-interest. And a reflection of his faith in the Holey Dollar per se.

We recently made an offer of $425,000 for a high quality (and unique) Lima Mint 1789 Holey Dollar. Unique because it features the portrait and legend of the deceased King Charles III, who died one year earlier in 1788.

Our client passed on our offer indicating that he preferred to hold onto it, believing that his coin had the credentials and potential for future growth. On that we can only agree.

And while more than one million dollars on four Holey Dollars in the past five months is an outstanding result.

Even more outstanding is the fact that buyers have outlaid more than two million dollars with Coinworks to acquire no less than eight Holey Dollars in the last calendar year.

PROOF GOLD, LUXURIOUS AS IT IS RARE.

In 2018, proof gold has emerged as one of the most fiercely contested areas of the rare coin market.

Over the last twelve months, prices paid at auction for proof sovereigns and proof half sovereigns have surged by about 20 per cent, the consequence of increased demand.

Now while it is true that gold is Australia’s most popular collecting metal, the key to the growth in proof gold has been its inordinate scarcity. Buyers know that there is never a chance that the market will be flooded with examples. The scarcity has simply given the market the confidence to buy.

Our offering of a 1930 Melbourne Mint Proof Sovereign saw the coin sell for $115,000 within a matter of hours of its release. And several disappointed buyers left in the wake.

And we have several clients circling the Veiled Head Proof Sovereign and Half Sovereign that we currently have on offer. 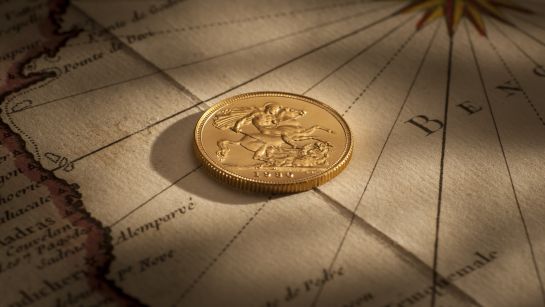 AS THE YEAR CLOSES, IT IS APPROPRIATE TO TOUCH ON WHAT IS COMING UP IN 2019.

The Proof 1930 Penny is the King of Australian coin rarities. Six examples were struck at the Melbourne Mint, three of which are held in public museums: the British Museum, Victoria Museum and the Art Gallery of South Australia. Three coins are held in private collections.

One of the three privately owned examples will be coming onto the market and offered through Coinworks by private sale. We refer to it as the Ex-British Museum Proof 1930 Penny. 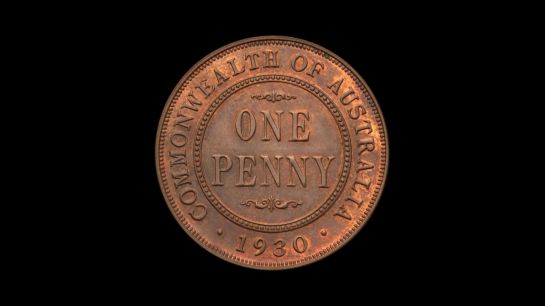 Although the coin was originally held by a private collector, it was donated to the British Museum in 1962 and became their second example. It is on record that the British Museum was a recipient of one of the examples out of the original mintage of six struck in 1930 at the Melbourne Mint.

Two decades later, the British Museum decided that two Proof 1930 Pennies were surplus to their requirements and exchanged one of their Proof '30s for an 1852 Cracked Die Adelaide Pound, the exchange occurring between the British Museum and an Australian Auction House.

The coin was subsequently sold to a private collector in Sydney for a figure reputed to be $150,000.

The ex-British Museum Proof 1930 Penny came into Coinworks hands in 1999. Acting on the instructions of a Victorian buyer, we acquired the coin at auction for $258,750. It was sold again by Coinworks in 2005 to a Sydney family for $620,000, where it still resides.

Price expectations on the ex-British Museum Proof 1930 Penny are in excess of $1 million.

We work actively behind the scenes to promote the numismatic industry and to this end we are finalising a proposal to host an Exhibition of Holey Dollars. And an Exhibition of the equally famous Adelaide Ingots.