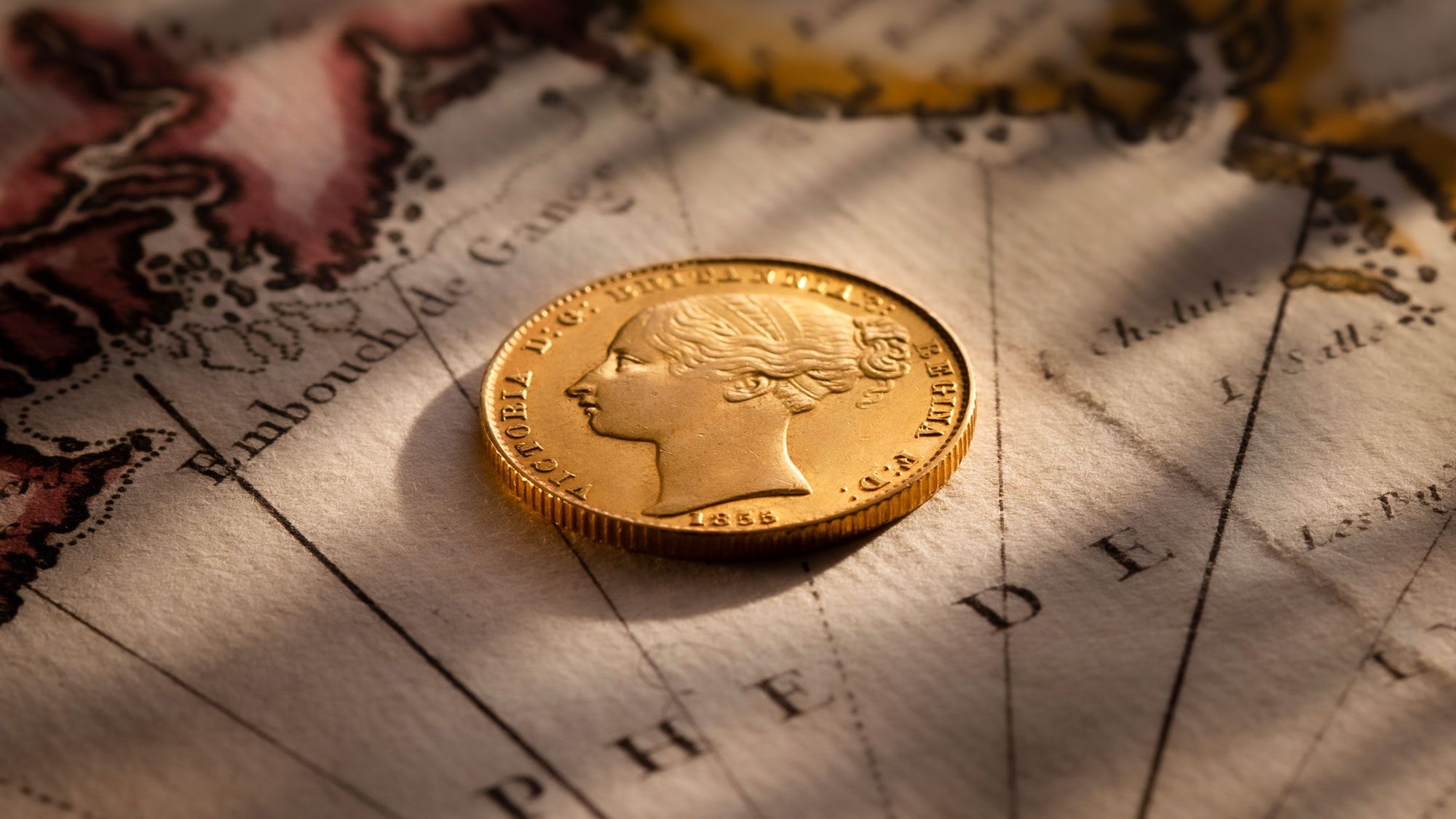 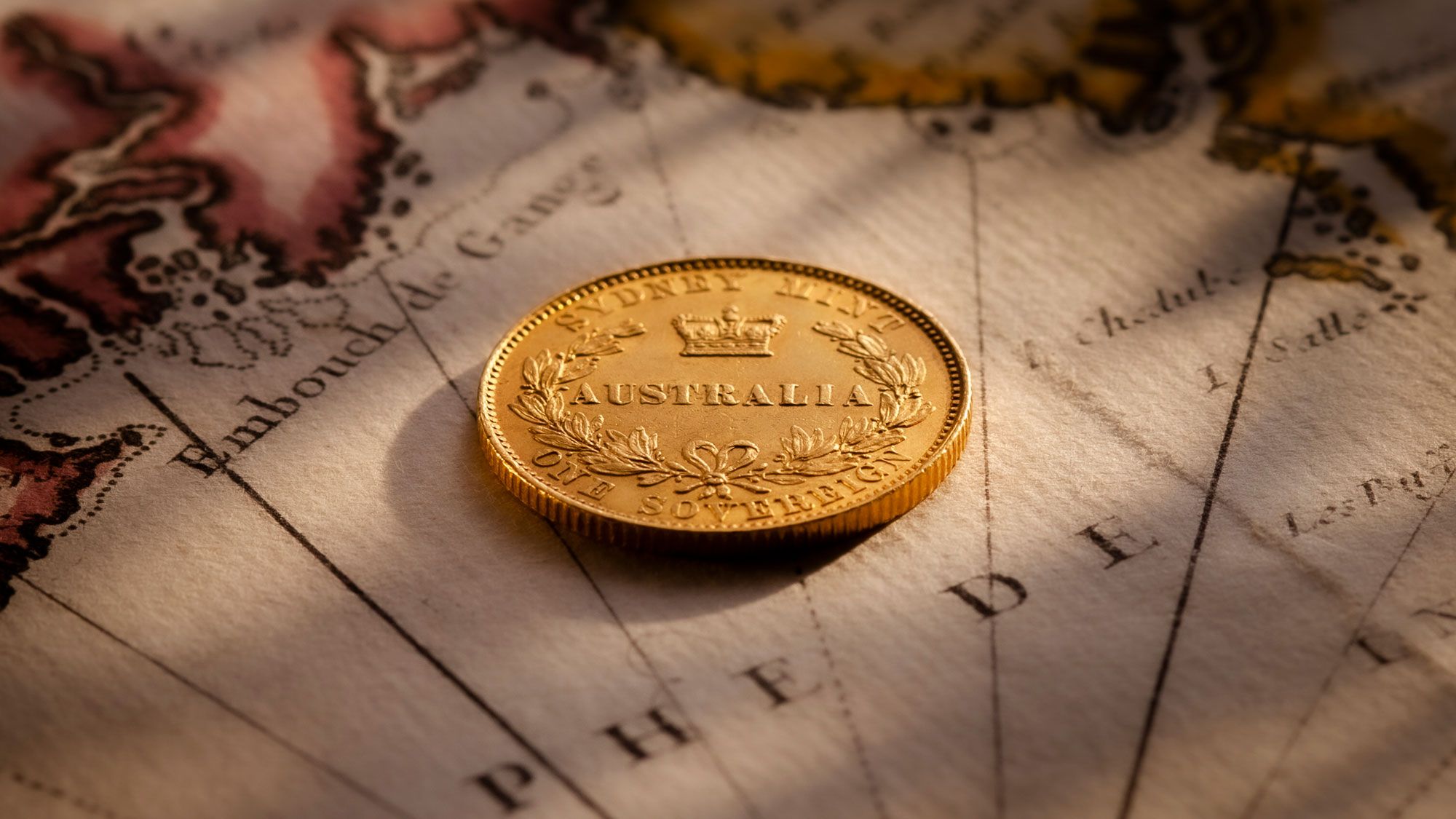 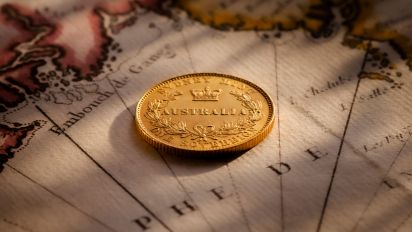 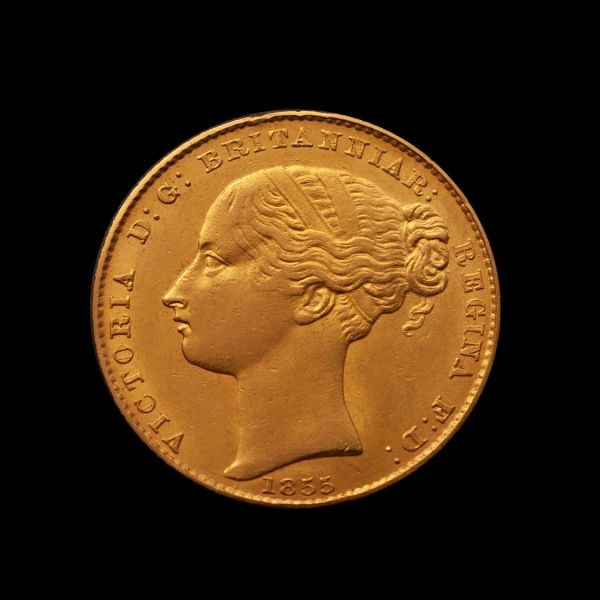 The 1855 Sydney Mint Sovereign featuring a filleted bust of Queen Victoria designed by James Wyon. The coin is the nation's first sovereign and the first coin of the realm minted at an overseas branch of the Royal Mint London. The portrait only ran for two years, 1855 and 1856.

The gold rushes of 1851 had a profound impact on Australia’s social and political development, underpinning the abandonment of the penal system on which the settlement of Australia had been based.

The discovery of significant gold deposits in Australia created sudden wealth and stimulated a vast influx of free immigrants, bringing new skills and professions and contributing to a burgeoning economy. In 1851, Australia's total population was 430,000. Two decades later, it had more than tripled to 1.7 million. 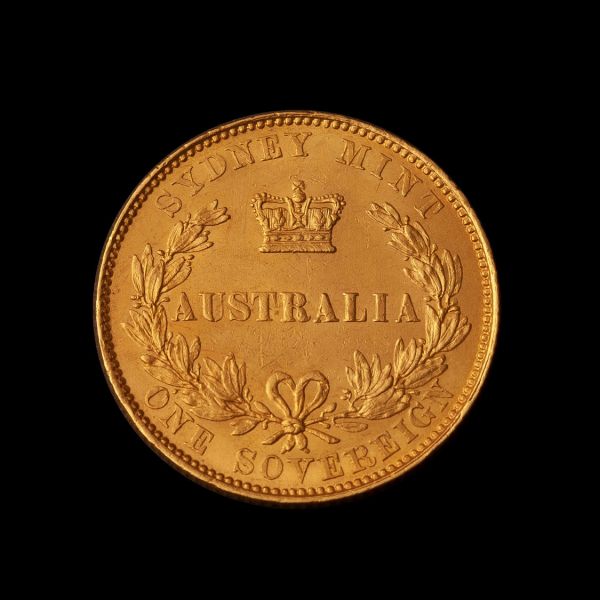 The 1855 Sydney Mint Sovereign reverse designed by L. C. Wyon was based loosely around contemporary reverse designs of the British Sixpence and Shilling. Its strong point of difference to the British coins, the inclusion of the words 'AUSTRALIA' AND 'SYDNEY MINT'. The design lasted until 1870.

Word of the discovery of gold spread like wildfire across the country and overseas. First was the rush to Ophir near Bathurst in early 1851 and the even greater rush to Ballarat in August of the same year. Then in quick succession came the rich finds throughout central Victoria, Queensland, Northern Territory and finally the bonanza in Western Australia.

It is one of the most eventful and extraordinary chapters in Australian history, transforming the economy and the nation's social order, marking the beginnings of a modern multi-cultural Australia.

i wish to take up your introductory offer

In 1851, the Sydney Morning Herald published an editorial championing the establishment of a branch of the Royal Mint in Sydney to buy gold at full price and strike it into sovereigns.

The plan for a branch of the Royal Mint received great support from the diggers. Solid opposition came from the banks and a prominent group of private individuals both of whom had become major buyers of gold on the fields at prices discounted well below the full London price. Profits were at stake! Both factions had earlier joined forces to quash a proposal for a Sydney Assay Office that would have also impacted negatively on their commercial interests.

While it is true that New South Wales had in 1851 formally petitioned the home office in London for a branch of the Royal Mint, the decision had already been made in the British Parliament to give the colonies greater autonomy and establish a branch mint to allow them to strike coins of the realm, the sovereign.

The Sydney Mint would strike sovereigns to exactly the weight and fineness levels at the Royal Mint but they would have their own design. This was to protect the international reputation of the imperial sovereign in the event that Sydney was unable to meet the exacting standards demanded of the coin.

On the 19 August 1853 Queen Victoria gave formal approval to establish Australia’s very first mint at or near Sydney in New South Wales. In the same year, the Royal Mint London prepared designs of Australia’s first gold coinage and manufactured the dies.

The sovereign obverse design was a filleted bust of Victoria, only slightly different to that used on British sovereigns. The obverse quickly fell out of favour and James Wyon was ordered to engrave a new obverse that would be uniquely Australian to easily distinguish the colonial sovereigns from their British counterparts. To this end, a new portrait was introduced in 1857 that featured Queen Victoria with a banksia wreath in her hair instead of the band.

The reverse design was based loosely around contemporary reverse designs of the British sixpence and shilling. Its strong point of difference to the British sovereigns was the inclusion of the words 'Australia' and 'Sydney Mint'. The use of the word Australia, a fascination with historians. At the time the nation was operating as separate colonies. Australia did not operate under a single Government until Federation in 1901.

The first Deputy Master of the Sydney Mint was Captain Edward Wolstenholme Ward, a trained member of the Royal Engineers. (Photo shown at top.)

Ward arrived in the colony in October 1854 on the ship Calcutta, along with other members of the Royal Engineers, a sergeant, three corporals and twelve privates. The group was deposited on Circular Quay with the bales and boxes of Sydney's new mint, along with the dies.

The Sydney Mint was established in a wing of the 'Rum Hospital' in Macquarie Street, Sydney. The mint began receiving gold on 14 May 1855 and issued its first gold sovereign soon after on June 23.

In their infancy the Sydney Mint sovereigns were legal tender only in the colony of New South Wales.

In January 1856, the British tested the quality of the colonial sovereigns and the results showed that they had a higher intrinsic value than their British counterparts, primarily due to their 8.33% silver content. Once these facts became known, profiteers began melting them down.

The design of the Sydney Mint sovereign lasted until 1870 and was the only time the word Australia appeared on our gold sovereigns. From 1871, Australia's sovereigns took on a traditional British design.

To supplement the coining facilities established in Sydney in 1855, Great Britain opened a second branch of the Royal Mint London in 1872, the location Melbourne. A third mint was opened in Perth, in 1899.