Andrew Fisher served three terms as Prime Minister between 1908 and 1915. We revisit the legacy of the man regarded as Australia's greatest 'nation building' leader. 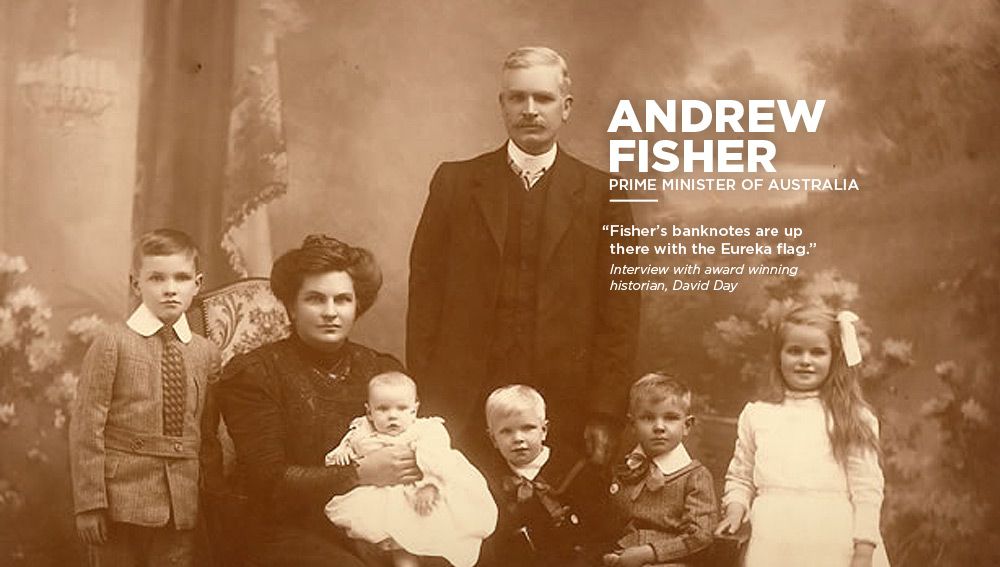 Few Australian Prime Ministers, if any, have left a legacy of nation building more than Andrew Fisher, who served three terms between 1908 and 1915.

Among Fisher’s many achievements was devising a Commonwealth banknote issue that has survived to this very day and become the envy of collectors and investors around the world.

So it is with great pride that Coinworks has been appointed to sell the personal property of Andrew Fisher – a sequential pair of Australia’s first Commonwealth Banknotes: the 1913 Collins Allen Ten Shillings numbered 4 and 5. The notes will be sold with an official letter and envelope from the Commonwealth of Australia, Prime Minister’s Office, hand signed by Fisher. The pristine condition notes do not have pin holes, as sometimes seen in other rare notes where letters had been attached.

Noted historian David Day’s fascination with Fisher led him to write an extensive biography that has since become an authoritative work on a man who, until the book was published in 2008, was largely forgotten after returning to England in 1915.

“Fisher is just so important to Australia’s history and yet people knew so little about him,” Day says. “That’s why I wrote the book – to put Fisher on the Australian map where he belongs.”

He supported the arts by imposing import duties on British and European paintings. Day says Fisher’s Government commissioned artists to deliberately paint Australian scenes. “A lot of those impressionist painters owed their livelihoods to Fisher,” Day says. “He put their works in government buildings and in Australia House in London.”

Also, Fisher began construction on the first section of the Transcontinental Railway linking Kalgoorlie in Western Australia to Port Augusta in South Australia.

“Fisher was just so incredibly passionate about Australia,” Day says. “Fisher was Prime Minister at a time when people were still conflicted about their identity. And Fisher was saying to them, ‘you have an Australian identity and that’s the identity you need to embrace’.

“Fisher created a psychological sense about being Australian – with the Commonwealth of Australia banknotes, the postage and the Coat of Arms. The banknotes epitomised his sense of Australian attitude to the core.”

Day says buying Fisher’s banknotes is akin to owning one of the founding documents of the nation.

And here Day draws a distinction between Australian and US history. The Declaration of Independence was America’s founding document. Day says Australia “gradually became a nation during the 20th Century” even though Federation in 1901 was one of the founding documents.

“The creation of Commonwealth of Australia banknotes was another step along the road to becoming an independent nation,” Day says.

“There are plenty of historic pieces out there, but Fisher’s are among the great iconic pieces of Australian history.

“Fisher’s banknotes are up there with the Eureka flag. Just as the miners were fighting for self-government, Fisher in his quiet, methodical and passionate way was fighting for Australian independence and the banknotes were one of the weapons he used.”

Day describes Fisher as a “big picture” Prime Minister driven by a vision to instil self-confidence into a fledgling nation. Fisher’s vision went way beyond introducing economic and social programs, which were ground breaking in any case.

Day says Paul Keating was a big picture Prime Minister as he tackled issues, such as Australia becoming a Republic, establishing closer ties with Asia and Aboriginal reconciliation. “These sort of issues don’t necessarily help an individual’s balance sheet, but they are really important in terms of giving self-confidence to the nation,” Day says. “It’s about having the vision to foresee the more subtle things that work on people’s psyche.

“That was Keating. That was Fisher.”

Fisher’s relevance as Prime Minister is on display today. Day says Fisher grappled with nationhood and being part of a bigger empire.

“In Australia today, we’re still grappling with whether we should be contributing to other nation’s wars, or concentrating on our own defence and the defence of our region. For a long time now, Australian governments have seen the US as Australia’s great power protection rather than England.”

Day says Fisher deserves to be acknowledged for his many achievements, and as one of Australia’s greatest Prime Ministers. Fisher was ahead of his time, but his legacy faded after returning to England. “He slipped from view,” Day says.

He says people looking back to the early 20th Century tend to focus on the colourful and outspoken Billy Hughes, who succeeded Fisher and was Prime Minister between 1915 and 1923.

Yet, Day argues, it was Fisher, the great Scottish-born nationalist and dedicated socialist, who undoubtedly sowed the seeds of an Australian identity among a collection of former colonies.

Fisher was the Prime Minister during most of the Gallipoli campaign.

“When our soldiers left for the First World War, they didn’t become Australian at Gallipoli – they were already Australian,” Day says. “The soldiers had their Australian pound notes in their back pocket, their Australian stamps and their money was probably in the Australian Commonwealth Bank instead of a branch of a British Bank.

“Fisher is simply one of the greatest nation building Prime Ministers ever in Australia’s history.”