Gold! Gold! Gold! Bright and yellow, hard and cold. Molten, graven, hammered and rolled. Heavy to get and light to hold. Hoarded, bartered, bought and sold. Stolen, borrowed, squandered and doled. Spurned by the young but hugged by the old. Thomas Hood (1799 – 1845) 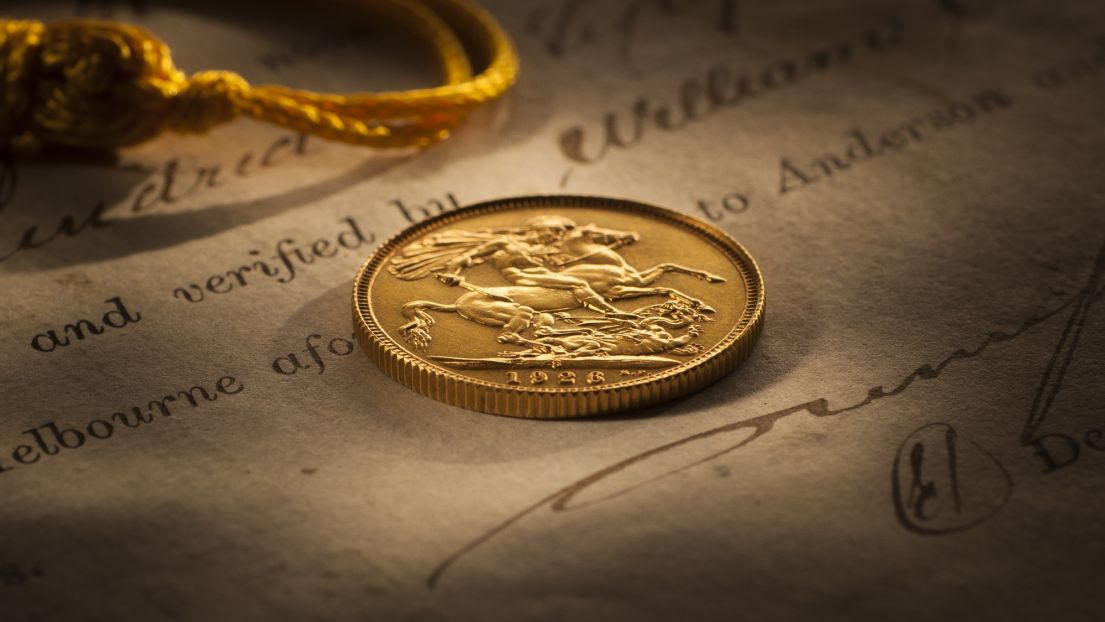 Unlike South Australia, which overcame a currency shortage by striking the Adelaide Pound, without British Government approval, Victoria and NSW followed protocol and petitioned for a branch of the Royal Mint to be established in their colonies.

Sydney had applied for a branch of the Royal Mint as far back as December 1851.

As part of this testing process, the Royal Mint struck proof quality pieces depicting the 1853 designs as an historical record of their work: a total of three pairs each comprising an 1853 Proof Sovereign and an 1853 Proof Half Sovereign.

Records indicate that 502,000 sovereigns were struck in the Sydney Mint’s first year of operation and only 21,000 half sovereigns.

Though the reverse side featured a uniquely Australian design, with the words Australia and Sydney Mint featured boldly, the obverse side was similar to English coins with the plain, ribboned head of Queen Victoria.

The reverse design has fascinated historians and collectors alike for decades.

The coins were inscribed with the national name, Australia, even though the country was operating as separate colonies. Australia did not operate under a single government until Federation in 1901.

The Australian flavour of the nation’s gold coinage was strengthened in 1857 when the design was altered to incorporate a sprig of banksia in the Queen’s hair.

It was also at this time, in 1872, that the Royal Mint established its second Australian branch office in Melbourne.

To celebrate Queen Victoria’s Jubilee in 1887, a new obverse portrait design was introduced, and at the same time, the reverse shield design discontinued (on the sovereign only) and replaced with Benedetto Pistrucci’s interpretation of St George slaying the Dragon. The jubilee design continued until 1893, when the Queen’s portrait was modified to reflect her age, known as the veiled head design. It was at this point in time that the reverse shield design on the half sovereign was discontinued.

The Royal Mint established its third Australian branch office in Perth in 1899.

The half sovereign, which was also first minted in 1855, was discontinued much earlier, in 1918.

Half sovereigns were minted in far smaller numbers than sovereigns, and there were many years when the pieces were not struck at all.

An overview of the Australian gold sovereign and half sovereign series.

Which means that there are nine different design combinations (or design types) in the Sovereign series.

The Australian Half Sovereign series ran from 1855 to 1918 and during this time seven different portraits were used, five of Queen Victoria, one of Edward VII and one of George V.

Which means that there seven different design combinations (or design types) in the Sovereign series.

A breakdown of the series of Australian sovereigns and half sovereigns is shown at right.