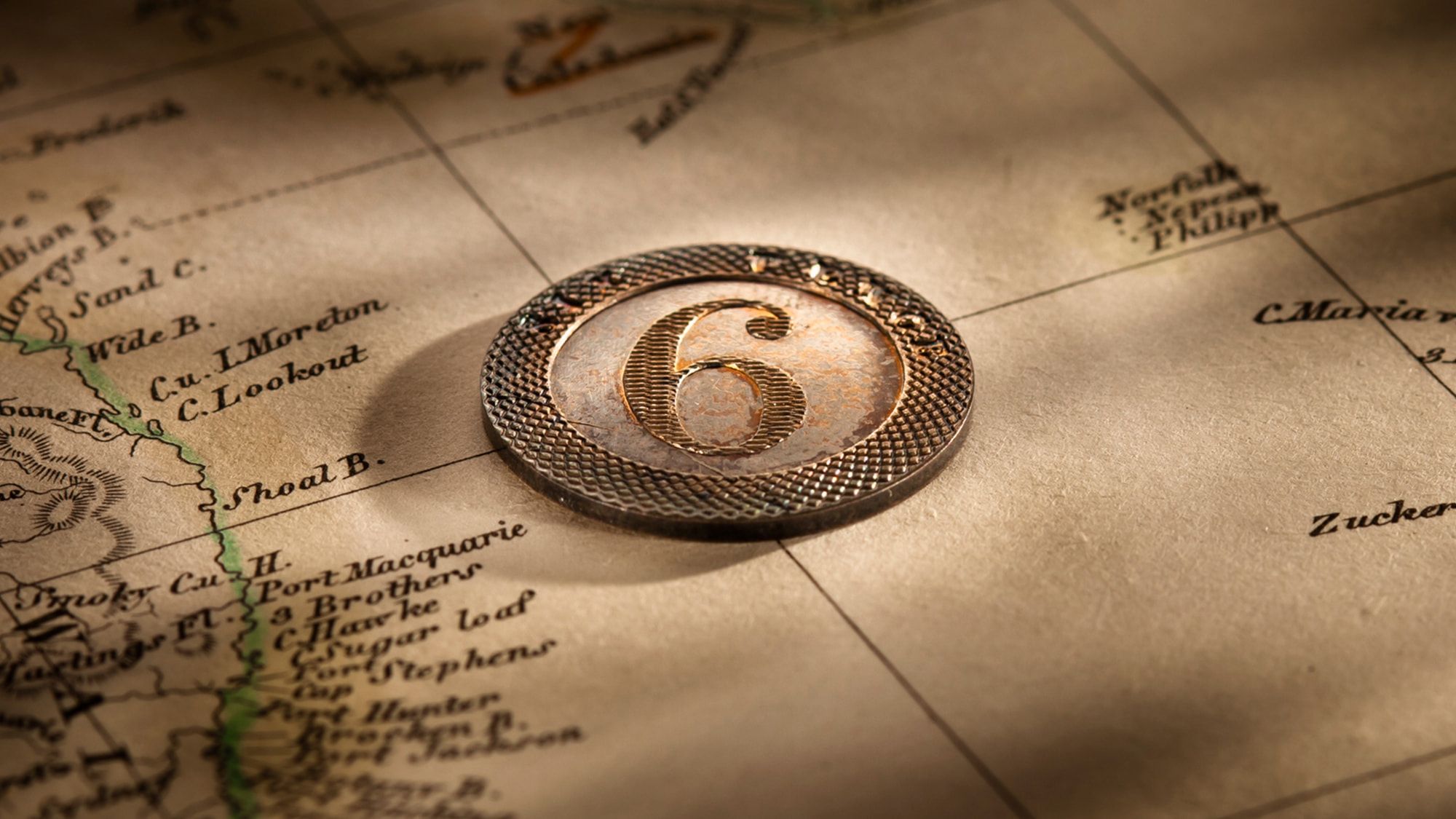 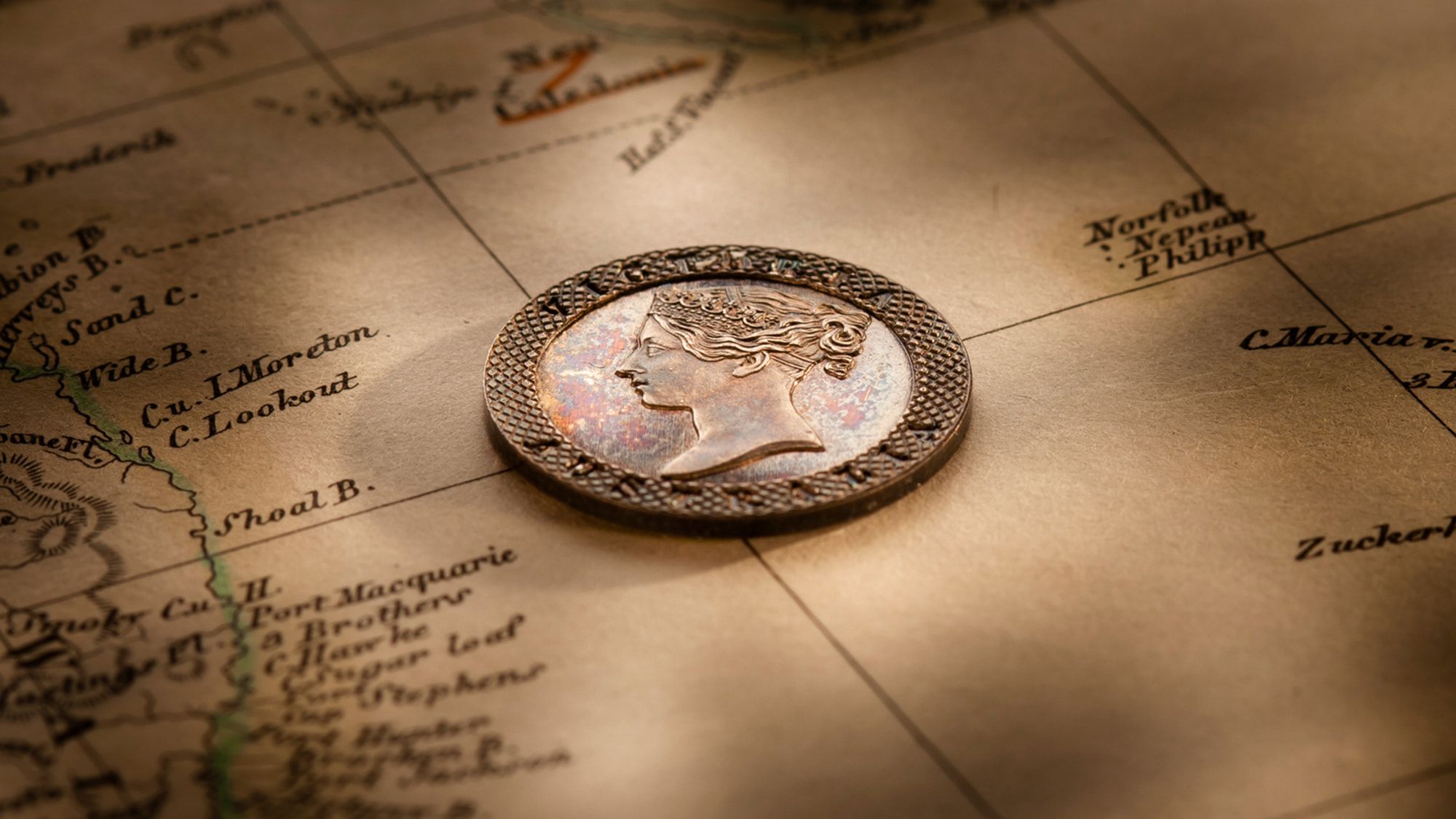 Circa 1855 Kangaroo Office Sixpence struck in silver, plain edge
COIN
Circa 1855 Kangaroo Office Sixpence struck in silver, plain edge
PRICE
$35,000
STATUS
Sold October 2020
QUALITY
Choice Uncirculated with superbly toned proof-like iridescent surfaces.
PROVENANCE
Barrie Winsor 2007, Private Collection Victoria
COMMENTS
History has judged British entrepreneur William Taylor a 'big noter'. He aspired to own and operate a private mint in Melbourne and create a new gold coinage for the colonies. The mint was called the Kangaroo Office and opened in 1854. Taylor ultimately embraced other metals and struck coins in silver and copper, aluminium and even pewter. Taylor’s coins were described in the Numismatic Chronicle of 1864 as “An interesting record of what the most prosperous colony England has ever founded intended as their national coinage." The coins issued by the Kangaroo Office are great colonial rarities and have been owned by leading international collectors, the U.K.'s Hyman Montague, Egypt's King Farouk and America's John Jay Pitman. And respected local collectors include Philip Spalding and Tom Hadley, of Quartermaster fame. We can certainly attest to their rarity having sold only two plain edged Silver Kangaroo Office Sixpences over the last twenty years. 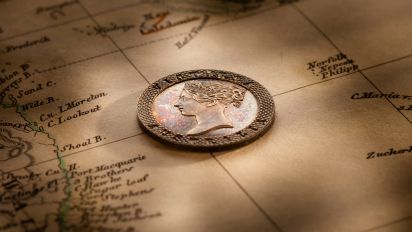 Obverse:
Displays a broad engine-turned rim encircling a superb portrait of Queen Victoria and the words VICTORIA and AUSTRALIA embedded in the rim.

Reverse:
Displays a broad engine-turned rim encircling a large figure ‘6’ in the centre and the words SIX PENCE embedded in the rim.

The mint was called the Kangaroo Office. Its prime goal was to buy gold at cheap prices direct from the fields and convert the precious metal into 'coins' of a fixed weight that would be released at their full value in London.

The plan was devised by English entrepreneur, William Joseph Taylor.

By trade Taylor was an engraver and die sinker, active in the numismatic industry producing both coins and medals. He formed a syndicate to finance the operations with two colleagues, Hodgkin and Tyndall. The total investment was £13,000.

Taylor's mint was only one component of a broader-reaching enterprise that was based in London. The overall plan was to profit from all aspects of the Gold Rush and included a clipper ship - called the Kangaroo - that would bring migrants and goods from England to Melbourne and return with gold in its specially outfitted strongroom.

The Kangaroo sailed from London on 26 June 1853. On board, the pre-fabricated structure to house the mint and the shop. And the coining press, dies and two employees, Reginald Scaife, the Manager, and William Morgan Brown, his assistant. The ship arrived at Hobsons Bay, Melbourne on 26 October 1853.

The Kangaroo Office got off to a bad start as there were no facilities at the wharf for off-loading heavy equipment, such as the coining press. With no other option available, the press was dismantled, moved and reassembled, a process that took six months.

1854 and the Kangaroo Office was up and running

The coins were exhibited at the Melbourne Exhibition of 1854 (17 October - 12 December) and were written up in the Argus Newspaper as "several tokens of pure Australian gold were exhibited by Mr. Khull, bullion broker. They were manufactured by Mr. Scaiffe and are to be exhibited at our Palace of Industry."(Sadly a price was never quoted.)

Apart from the logistical difficulties of setting up business, the financial viability of the Kangaroo Office came under an immediate cloud.

By mid-1854 when the mint became operational the price of gold had moved up to £4/4/- an ounce, vastly different to the £2/15/- per ounce when the plan was hatched. And there was a glut of English sovereigns in circulation.

By the middle of 1854, Reginald Scaiffe, the Kangaroo Office Manager, had an overwhelming sense of failure for the shop had taken less than £1 in trading, he had a ten-year lease, could not find cheap labour. Nor cheap gold. And basically had no customers.

Despite the financial challenges of the operation Taylor was unconvinced that his days as a coin designer and manufacturer were at an end.

In 1855 he produced dies for the striking of a sixpence and shilling in gold, silver and copper. This was his first attempt at producing a piece depicting a value rather than a weight.

Now while it is true that Taylor never achieved his ambitions, the Kangaroo Office coins are revered by Australian collectors. And collectors right across the globe. 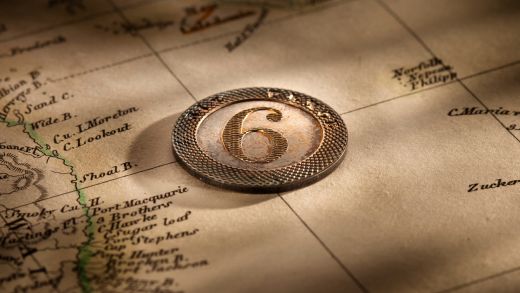