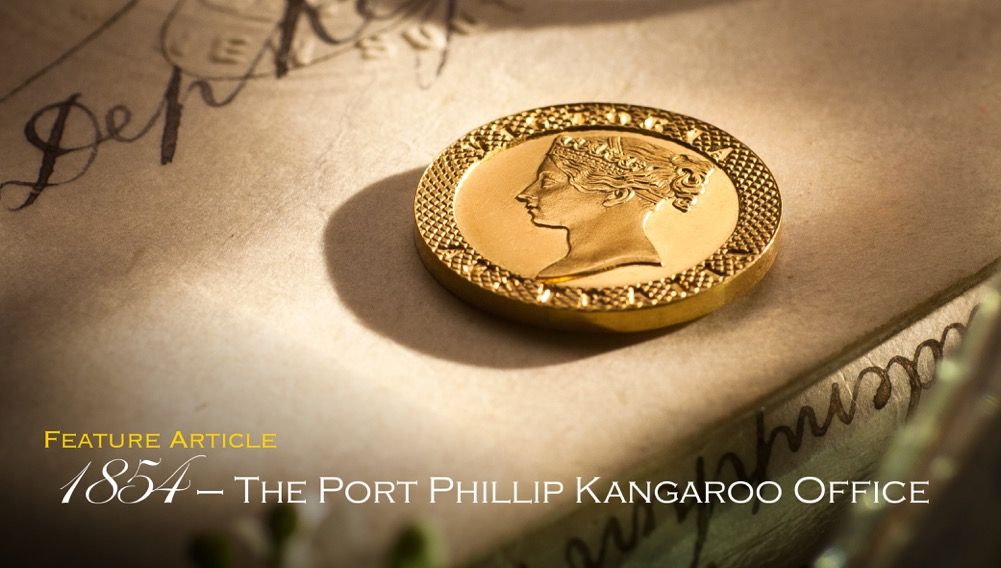 The coins struck at Melbourne’s ‘Kangaroo Office’ in the 1850s have been owned by some of the greatest collectors of our time; Montague, King Farouk of Egypt, J J Pitman and Quartermaster to name but a few.

William Joseph Taylor was an Englishman, and by trade an engraver and die sinker, active in the numismatic industry producing both coins and medals. He was an entrepreneur. And a shrewd businessman.

Towards the end of 1852 Taylor became aware that gold could be bought from diggers on the Ballarat fields at greatly reduced prices. His plan was to establish a private mint in Melbourne, strike gold coins and release them at their full value in London. To thwart currency laws, the designs were made to look more like weights than coins. Taylor himself cut the dies for a 2oz, 1oz, 1/2oz and ¼oz gold piece, each dated 1853.

Taylor formed a syndicate with two colleagues, Messrs Hodgkin and Tyndall: the three investing £13,000 in the enterprise. They chartered a fully rigged 600 ton vessel to transport the coining press, the dies and two employees, Reginald Scaife (manager) and William Morgan Brown (assistant).

The vessel was aptly named ‘The Kangaroo’, then, as now, a symbol of Australia. Taylor’s mint was known as the Kangaroo Office and was situated near Melbourne’s Flagstaff Gardens in what is now Franklin Street West.

‘The Kangaroo’ arrived at Hobsons Bay on 23rd October 1853, and the huge coining press was deposited on the wharf. And there it sat. Unfortunately, it was too heavy to transport. The only option was to take it apart and move it, piece-by-piece, to the Kangaroo Office, where it was reassembled and put into working order.

The Kangaroo Office eventually commenced operations in May 1854.

The coins were struck in gold and featured a heavy broad engine-turned rim with a squatting kangaroo facing right and in sunken letters on the rim the words PORT PHILLIP AND AUSTRALIA.

The reverse depicted the weight of each piece in figures with the words PURE AUSTRALIAN GOLD above and the weight in letters embedded into the rim. Again the emphasis was on the weight rather than a value so as not to be construed as a ‘coin’.

The Kangaroo Office operated for three years striking examples from the original dies, although how many of each is unknown.

We do know that William Morgan sold a complete set of the four kangaroo patterns to the British Museum and was said to have informed the museum staff that a total of 27 sets were struck, of which all but one had been melted down. Reginald Scaife also told Sydney numismatist Dr Walter Roth that only one set had been issued in Melbourne. This set was displayed at the 1854 Melbourne Exhibition but what happened to it after that is unknown.

Between one and three pieces have come to light over the last century. The US Collection in Philadelphia has 1/2oz and 2oz pieces. In 1892, Sotheby’s London sold a 1oz, 1/2oz and ¼oz coin as part of the famed Montagu Collection: the 1/4oz eventually becoming part of the Quartermaster Collection. In 1954, US collector J J Pitman acquired the 1oz and 1/4oz pieces contained in the collection of King Farouk of Egypt. The coins to this day remain missing, either stolen or melted down.

In 1976 a staff member of Sotheby’s London noticed a 1/4oz piece dangling from a client’s charm bracelet. The mount was removed, the coin later selling for $17,180. That piece also made its way into the Quartermaster Collection.

The Kangaroo Office was under financial pressure right from the outset. By the time the mint was operational gold, which had been £2/15/- per ounce when the plan was hatched, had moved up to £4/4/- an ounce. And there was a glut of English sovereigns in circulation.

Despite the financial challenges of the operation Taylor was unconvinced that his days as a coin designer and manufacturer were at an end.  In 1855 he produced dies for the striking of a sixpence and shilling in gold, silver and copper. This was his first attempt at producing a piece depicting a value rather than a weight.

So how does today’s market view the Port Phillip Kangaroo Office coins?

Now while it is true that Taylor never achieved his ambitions, the Port Phillip Kangaroo Office Patterns are revered by collectors and investors in Australia. And right across the globe.

One of the difficulties in assessing values of this type of product is the inherent rarity of the pieces and their infrequent appearances in the market place. Precedent becomes difficult.

Fortunately for us Tom Hadley decided to liquidate his Quartermaster Collection in 2009. And healthy precedents were set.

The sale of the Quartermaster Collection presented the greatest EVER offering of Port Phillip Kangaroo Patterns at an Australian public auction. Seventeen pieces in total sold for $1,678,300 against an estimate of $1,623,000 with at least five of them setting new world record prices.

These results need to be considered against the backdrop of the entire auction for the Kangaroo Patterns were offered as lot 3 to 19 out of a 308 lot auction, so in the earliest stages of the auction proceedings.

Anyone that has attended an auction like this will tell you that bidding can be quite hesitant and tentative in the early stages of a 308 lot auction as bidders face an onslaught of high value alternatives that would have consumed their dollars.

That bidding exceeded the estimates is a reflection on the rarity and calibre of the product. Some highlights of this section of the auction are detailed below with our comments on current values.

Two Port Phillip, Kangaroo Office Gold Shillings and one Office Gold Sixpence were also sold at the sale. The first gold shilling (with the milled edge and struck in 1855) sold for $305,000, the second, featuring the plain edge (believed struck circa 1860), sold for $195,000. The sixpence, also with the plain edge, was acquired for $175,000.