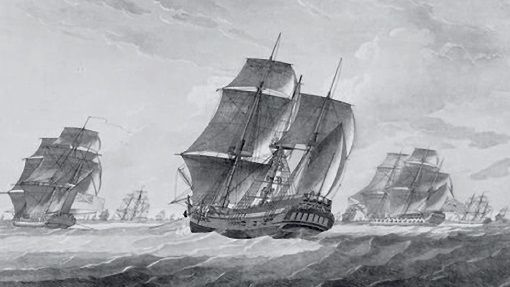 Convict Ann Mash, or Marsh as she is sometimes known, was one of Sydney’s first female entrepreneurs.

Ann was transported to the penal colony of New South Wales as a convict. She arrived in 1790 on board the Lady Juliana, the ship commonly referred to as the 'Floating Brothel'.

As the ship sailed through the Heads of Sydney Harbour would Ann have ever envisaged that such a powerful description, of being a female entrepreneur, would one day be bestowed on her?

Ann Mash was born in 1767 in Buckland Brewer, Devon, the sixth of seven children. She was charged together with Mary Edwards, at the Exeter Assizes, with stealing a bushel of wheat.

Mary, being married, was fined six shillings and given six months hard labour. Ann, being single, was sentenced to seven years 'beyond the seas' in the new colony of Botany Bay.

She joined more than two hundred women and six children on the Lady Juliana. It was part of the Second Fleet that sailed from Plymouth on 29 July 1789, arriving in Port Jackson on the 3 June 1790.

The story of this woman opens our eyes to early settler life in Sydney from the perspective of female convicts, the growth of commerce, and, in particular its financial documents.

Ann Mash, the business woman, issued her own promissory notes  between 1812 and 1813, an example of which is shown below.

Ann Mash, a multi-tasker in every respect.

Steward of the Lady Juliana, John Nicol, refers to the ship as the  'Floating Brothel' in his autobiography noting that 'when we were fairly out to sea, every man on board took a wife from among the convicts, they nothing loath'.

This voyage was also labelled the 'Voyage of the Courtesans', as British Home Under Secretary Evan Nepean issued the order that the new colony needed not only increased provisions and supplies, but the stability created by more women, children and families.

As a result, more than two hundred female thieves, prostitutes, con artists and six children were taken from the prisons of England and shipped off to the struggling penal colony on the other side of the world.

There was some objection from those already in Sydney, when the ship arrived with more mouths to feed, however, the rest of the Second Fleet arrived a couple of weeks later with food and supplies.

Despite some confusion regarding Ann’s last name, I think after looking at her handwriting on her promissory notes that her name is Mash. She did take the name of her protectors and husbands and was later well known as Ann Chapman, after the death of William Chapman in 1810.

Ann’s partner for the voyage was Richard Alley, the ship’s surgeon, who was known as a kindly and thoughtful man. They had a child who was baptised Charlotte Maria Alley on June 5th 1791, one year after arriving in the colony. Sadly she lived only a few days after her baptism.

In 1792, Ann entered into a relationship with John Irving, a convict who had come out in the First Fleet and was the first, in 1790, to obtain an absolute pardon. As a result of his pardon and his surgical skills he was appointed assistant surgeon at Parramatta and received a land grant of 30 acres.

In September 1795, he died suddenly at the early age of 31, before he could be told that he was to receive a salary of £50 per year. Ann bore him a son in 1796, four months after John Irving’s death. The title of Irving’s land passed to Ann as his common law wife and she held it until 1798, when she sold 'Irving’s Farm' to Richard Fitzgerald.

It has been surmised that Ann and her new husband, Robert Flanagan, whom she married in November 1796, were still living on the Parramatta land grant after Irving’s death when Flanagan absconded in 1798 making a successful bid for freedom, but leaving his new family behind.

Ann wasted little time in joining forces with William Chapman, a plumber, painter and glazier who had been transported for stealing 400 lbs of lead. A consummate actor, William arrived on the Pitt in February 1792 and appeared in theatre company productions until 1796, when he was appointed a constable.

He commenced living with Ann Mash in 1798 (or 1799) and the first of their six children was born in 1800. He and Ann started a bakery, a butchery and a general goods shop in lower George Street and it was from here that Ann sold her pies.

An advertisement in the Gazette notes that  her 'most excellent mutton pyes' are available daily at noon. Sausages could be made to order.

Chapman did have some brushes with the law and with Governor King, due to a misunderstanding with some visiting officers of the French naval vessel Le Naturaliste over the illicit traffic in wine.

His reputation however was good enough that in 1807 he secured a wine and spirit licence and opened the Kings Head Tavern.

The King’s Head tavern was situated in High Street, at what is now 149-151 George Street.

It had previously been the home of Captain William Raven, a master mariner and merchant living in Sydney from 1799 to 1807.

Chapman operated the tavern until his death in 1810, at which time Ann took it over. A year later Governor Macquarie transferred the wine and spirit licence to her name.

She held it until 1813, when it appears that she sold the business. Colonist, Samuel Fowler is recorded as holding the licence in 1817.

Her expertise in the liquor trade is well documented.

On May 24 1802 Ann was convicted of selling spirits without a license on the Sabbath and bribing a constable to say she had only half a gallon in her house when the reality was she had eight gallons.

The conviction cost her dearly.

Apart from the £5 bribe, it is recorded that the sum of £15 was received by the magistrate, the Reverend Samuel Marsden (the flogging parson), from Mr Smith on account of Ann Mash, presumably part of her fine.

From the early 1790s, Ann managed a small goods and passenger service from Parramatta to Sydney, known as 'Mash’s Boat'.

The ferry service carried government personnel and their luggage, as well as the general public.

She employed men to handle the boat, which probably had small sails as well as oars. 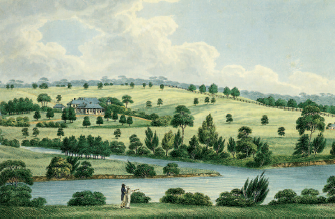 The name, Anne Mash, was regularly reported in the Sydney Gazette and on May 8 1803 reported that 'yesterday afternoon, the passage boat belonging to Mrs Ann Mash was brought opposite the Magazine for landing contrary to General Orders, which specify that no boat shall land in any part of the harbour but at the Public Wharfs, and received on board

2 bags of sugar, 1 chest of tea and 6 pieces of calico; all of which were ordered to be detained but the boat to proceed in her usual employment till further orders'.

In July 1803 Governor King issued regulations regarding 'Recognisances for Passenger Boats to Parramatta' dated 11 July which were signed by Ann Mash and five others. Ann and Thomas Halfpenny were obliged to pay £50 each, the others £25 each, so it would appear that there were two boats for Mash and Halfpenny.

On July 17 1803, the Gazette published a notice: 'Ann Mash, licensed proprietor of a passage boat, particularly requests, that places and parcels may be paid for, agreeable to the rates of charge specified in His Excellency’s General Order of 6th instante mense, before the boat quits the wharf either at Sydney or Parramatta'.

She had to advertise on June 30 1810, 'taken from alongside of the Edwin schooner, on the night of the 18th a boat about 20ft long and 7ft in the beam. Whosoever shall give information whereby she may be recovered, will receive twenty shillings for their trouble from Mrs Chapman, Kings Head, High Street, Sydney'.

When William Chapman died in 1810, Ann found life and business were tough without her partner and her youngest child had to be placed for a brief period in the Sydney Orphan School.

The Promissory Notes of Ann Mash.

While much of Ann’s life has to be gleaned from various and diverse accounts, her finances are very much in evidence. She held an account with the Bank of New South Wales when it opened in Sydney in 1817.

The other records that survive are some of her promissory notes that she issued while owner of the King’s Head Tavern and her other businesses in Sydney. 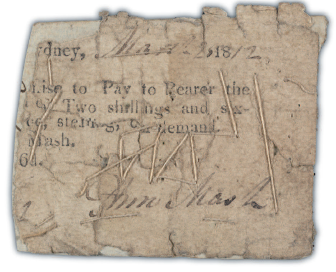 Promissory note issued 1812 by Ann Mash 2/6d signed by Ann Mash restored by sewing a backing to the note. Image courtesy of the National Library of Australia MS3611.

Promissory notes were issued by quite a few businesses in Sydney and Hobart during the early years of European settlement.

Governor King had passed a proclamation in 1800 that set the sterling values for 11 different world coinages. In 1812 Macquarie received 40,000 Spanish dollars and was instructed to take 'any measures necessary to ensure the coins’ retention within the colony'. This resulted in the 'holey dollars' being counter-stamped 'five shillings' and the inner ‘dump’ 'fifteen pence', equalling 1/3d.

Despite these actions, there was still a shortage of currency and some well known and favourably regarded businesses were able to issue promissory notes that were effectively IOUs to fill the lack of small change.

Other promissory notes/drafts were issued for larger amounts for individual commercial transactions.

Two examples in the denomination of 2/6d are held in the National Library of Australia as part of the Sir John Ferguson Collection (MS3611). The note reproduced in this article is dated 1812. The day and month is undetermined (although the suggestion is March 2nd) and is held together by cotton stitching onto a more resilient backing.

Only one example in a one shilling and sixpence denomination is known, being S/No. 6 and dated March 6 of 1812 (or 1813). Originally owned by Bill Wright, it was sold by Coinworks in June 2017.

An indication of Ann Mash’s standing in the community can be gained from the different printings of the notes.

The 2/6d notes all have the name George Street next to the counterfoil.

The fact that the dates on the notes are all after the death of her partner William Chapman would indicate a solid financial situation for her businesses, especially as women did not usually operate on their own account but under their husband’s name. 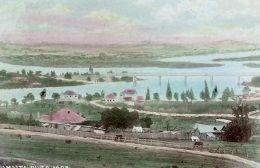 Early picture of Parramatta River by William H Broadhurst 1855-1927. From the collections of the State Library of NSW. Image Wikimedia Commons.

Details of Ann’s later life are sketchy. She sold the Kings Head Tavern in about 1813 as indicated by her licence. The next record of ownership is by Samuel Fowler of Hunter Street, who held the licence in 1817.

She ran the boat service until her death, so the mortgage signed to Wentworth may have been a capital raising exercise.

Wentworth had a very good reputation for honesty, despite disparaging comments regarding the contract to build the 'Rum Hospital'. He was a director of the Bank of NSW and would have been well placed to know Ann’s financial situation.

Ann Marsh died on March 7 1823, at the age of 56 and is buried in an un marked grave at St John’s Cemetery, Parramatta.

She made the best of a difficult life, her business sense providing for her large family, which was thereby enabled to stay together.

She lived to see all of her nine surviving children marry and prosper in such diverse fields as whaling, shipping, farming, boat building and butchery.

Her name is included on a monument at the ferry terminal at Parramatta together with other early ferry boat owners and operators such as Thomas Halfpenny.