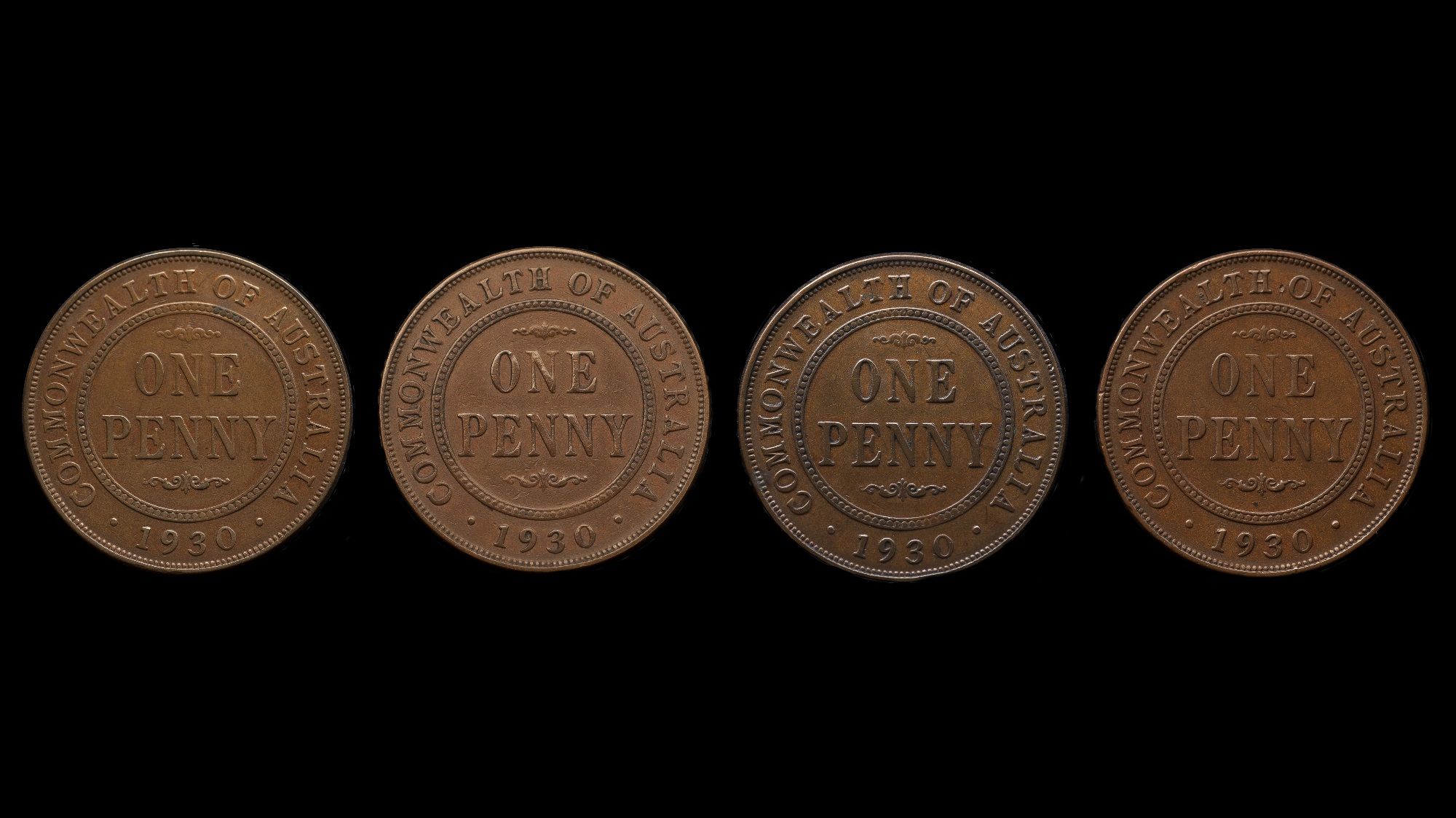 1930 Pennies - a collection of four coins.
COIN
1930 Pennies - a collection of four coins.
PRICE
As detailed below.
QUALITY
As detailed below.
COMMENTS
We have hand-picked four 1930 Pennies to include in this promotion covering a spectrum of qualities and a spectrum of prices, ranging from $26,500 to $45,000. Irrespective of the quality and irrespective of the price we have followed our prime rule for selection and that is to acquire a piece that you would be proud to show your family and friends, one that has an heirloom feel about it.
Enquire Now

The aesthetics, how a 1930 Penny looks to the naked eye, is an important part of the selection process. The reason is simply that the 1930 Penny was minted by accident and no one knew of its existence until at least ten years after it was issued.

Which means that the coins were used. With the majority well used, before collectors discovered its very being.

It is a fact that we reject more 1930 Pennies than we accept. We don't like gouges and we don't like massive edge knocks.

And now to our likes. We particularly like strong upper and lower scrolls, intact inner beading and handsome even chestnut toning.

The four 1930 Pennies shown below follow our selection protocols in every respect.

Buy one of these coins and you will be proud to show it around. 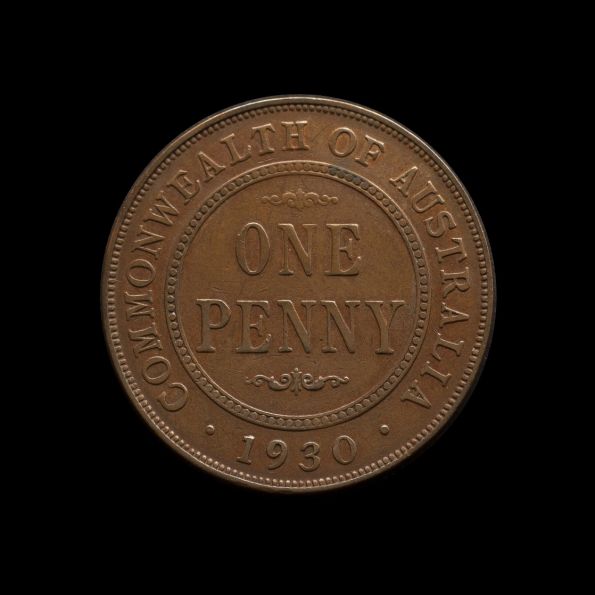 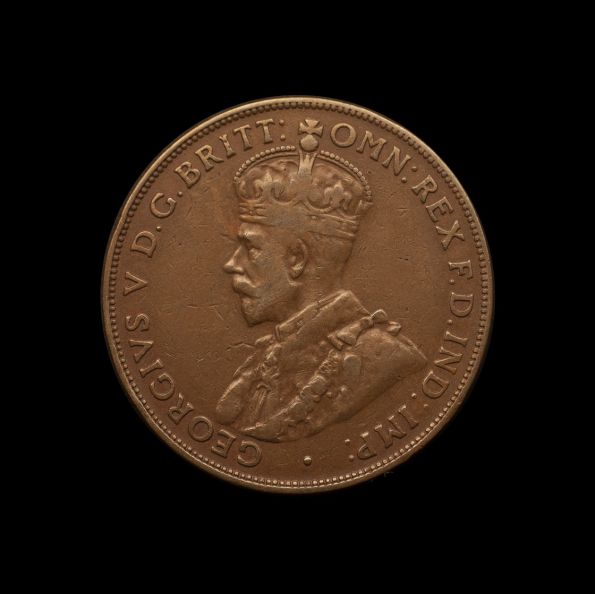 Perhaps the most remarkable aspect of this promotion is that you can select your coin to suit your budget.

And walk away knowing that you have acquired a truly great example of Australia's classic copper rarity, the 1930 Penny.

This coin was acquired from Coinworks in February 1995 and has not seen the light of day ever since.

The obverse shows just the start of the first side of the central diamond and six pearls.

Minimal marks in the fields and handsome toning. 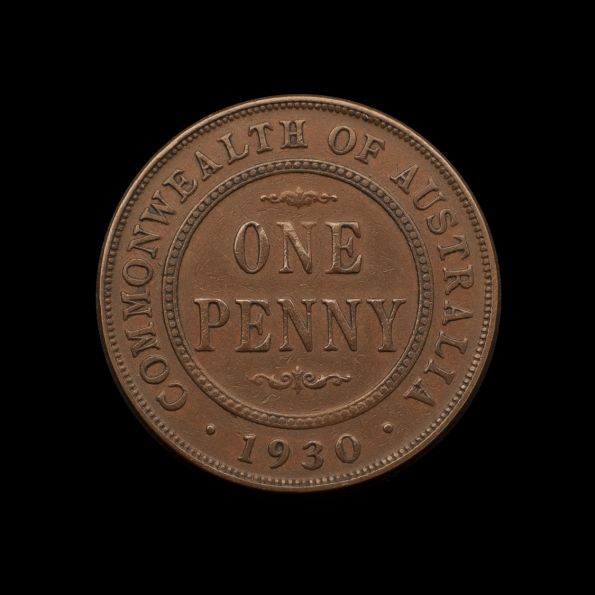 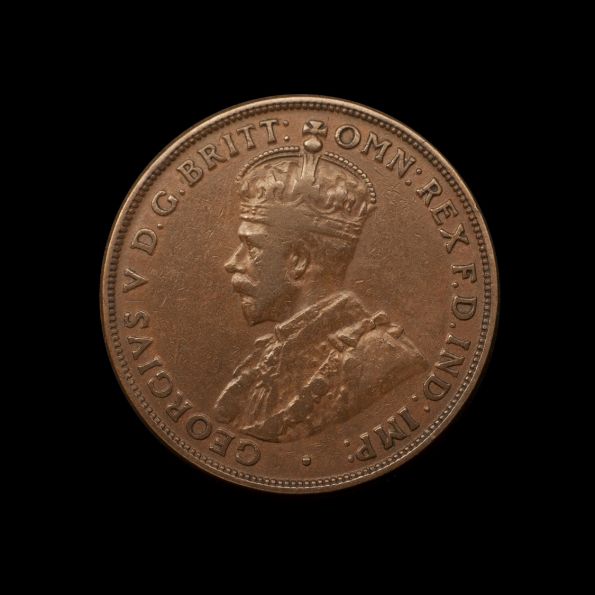 A former (and somewhat famous) Australian pop musician in the 1960s turned professional businessman in the 1970s, the acquisition of this 1930 Penny fulfilled a lifelong ambition. Now retired to the South of France ... his coin is up for private sale.

This 1930 Penny is the classic example of a coin that has circulated but has survived its time in circulation relatively unscathed.

A glance at the photos shows a difference (slight) between this coin and those 1930 Pennies shown below. And that's OK because there is a corresponding price difference.

This coin has strong upper and lower scrolls and the beading is intact. The toning is handsome and even.

On the obverse one side of the central diamond is showing and six clear pearls.

We also comment that there are minimal marks in the fields and nice edges on both obverse and reverse.

So, while technically this coin has undergone more use than the coins shown below, it has survived its years in circulation remarkably well. And offers great value. 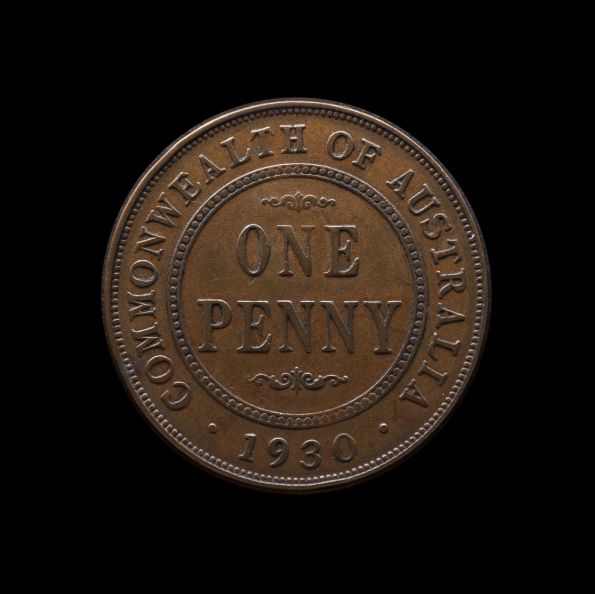 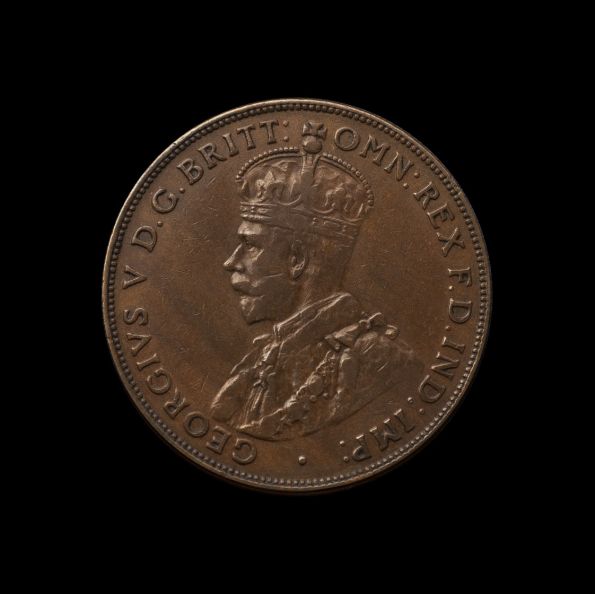 We love this coin. And in fact we were the under bidder when it was offered at a Sydney Auction several years ago, outgunned by a very determined Victorian collector.

The collector has been passionate about coins since he was a child. Now approaching retirement, he has consigned his prized gem to Coinworks for private sale.

Our view on the coin today is exactly the same as it was a few years ago when we entered the auction room. It's just a really impressive 1930 Penny.

With at least two sides of the central diamond showing and six plump pearls, the fields are glossy and the upper and lower reverse scrolls are strong.

The coin has a genuinely strong presence and is visually very attractive.

This 1930 Penny follows our guidelines. It is a coin that you would be proud to show your family and friends. 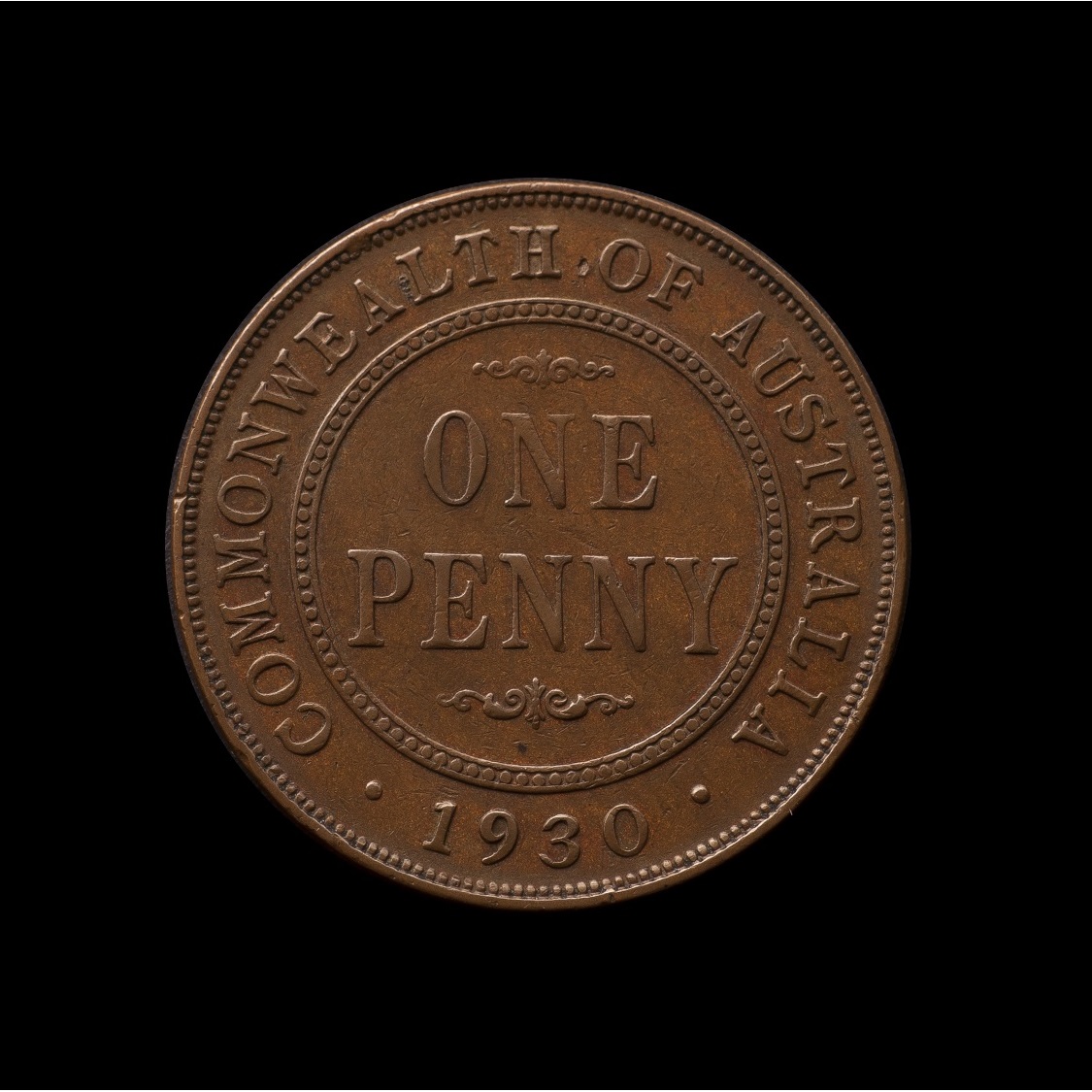 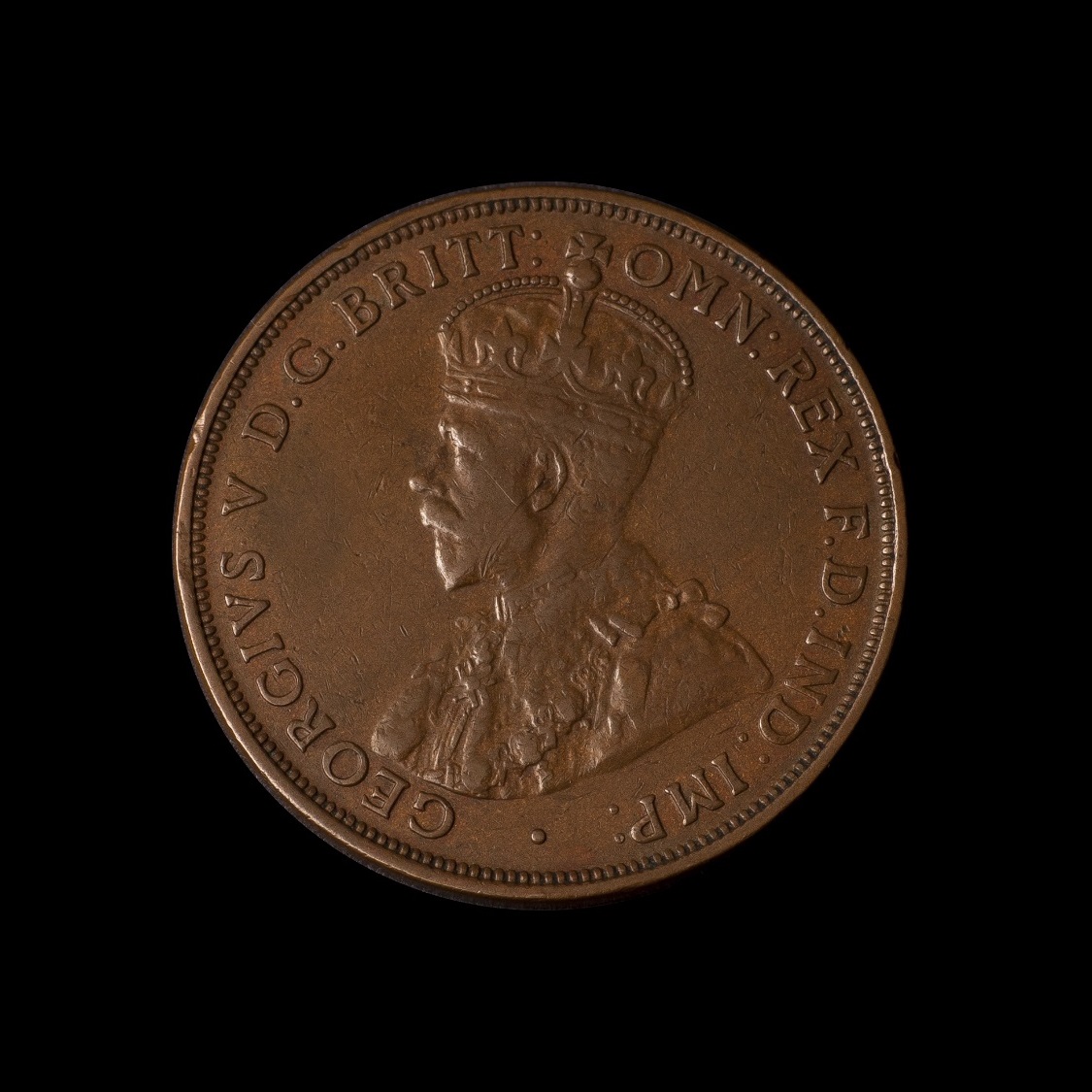 The 1930 Penny was struck during the Great Depression. An era when every penny counted for a family's very survival and the notion that a penny be put aside as a collectible almost non-existent.

Yet it is clear from the photos that this 1930 Penny has undergone minimal circulation. We rank it in the top eight per cent of surviving examples.

We reviewed our records and confirmed the rarity of Very Fine 1930 Pennies. We last sold an example eighteen months ago! Now that's genuinely rare!

This coin has a full central diamond that leaps out and knocks you in the eye. There are six clear and crisp pearls and the smudging of the seventh and eighth pearl. (Amazing.)

The oval to the left of the central diamond is almost intact. The lower band of the crown is complete and the fields even and smooth.

The reverse is particularly impressive with well-defined upper and lower scrolls.

And while all of the above sounds very technical, the technicalities need to be stated for you are buying a premium 1930 Penny with this coin and one of the best.