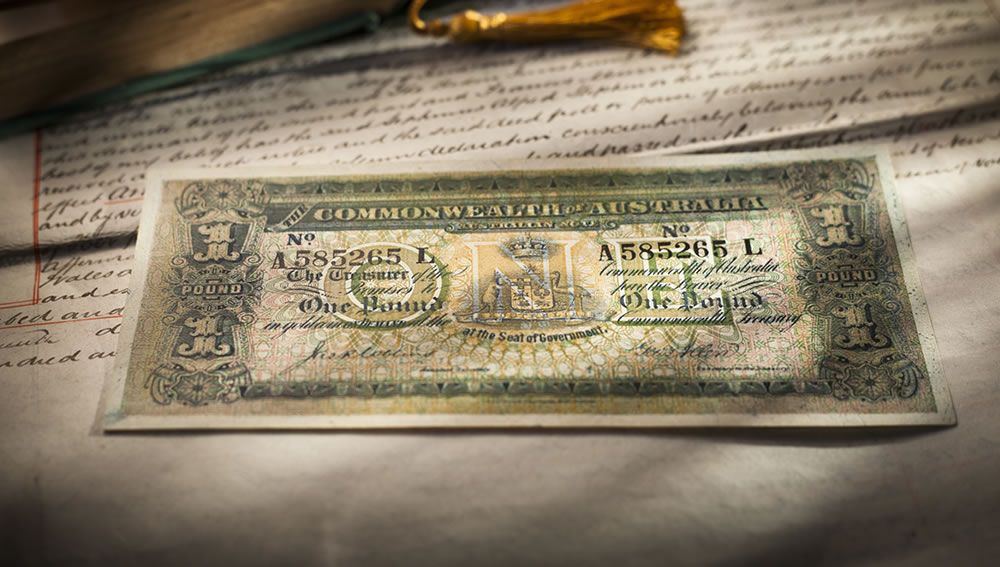 1916 Collins Allen One Pound (R18e)
NOTE
1916 Collins Allen One Pound (R18e)
PRICE
$ 19,000
STATUS
Sold July 2015
QUALITY
about Uncirculated
PROVENANCE
IAG Auction 2006, Private Collection Perth
COMMENTS
The Collins Allen signature combination is arguably the most important in Australia’s banknote history. The signatures of Jas R Collins and Geo T Allen, the former acting in his capacity as First Assistant Secretary to the Treasury and the latter as First Secretary to the Treasury, appeared on the very first banknotes issued by the Commonwealth of Australia.
Enquire Now

(If you recall it was the very same combination that appeared on the nation’s Number One banknote. And banknotes 4 and 5, the Property of Prime Minister Andrew Fisher that sold last year for a combined total of $1.25 million.)

History will always look favourably on this Collins Allen One Pound Note. Its appeal will never be diminished. Its historical value can only increase.

This One Pound note will also be in favour because of its quality. The note is presented in about Uncirculated quality. When it was offered at auction in 2006, Auction House IAG described it as one of the very finest known. A point on which we agree.

And there has been none on the market since to refute that statement.

The majority of One Pound notes out of this era come well used. It has to be remembered that, at the time, the average wage was £12. It was the note that appeared in the average person’s pay packet: intended to be used in day to day transactions. Not put aside as a keepsake.

This Collins Allen One Pound is a wonderful, historic piece and, at the price being offered, offers solid investment potential. The very reason why we have chosen it as our front cover item on our upcoming Catalogue.