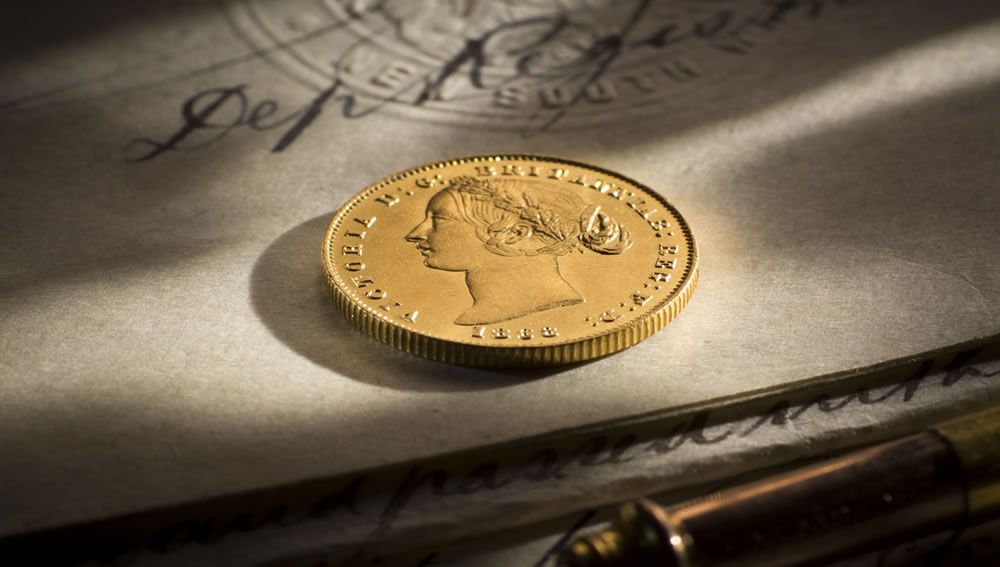 On the 9th August 1853 Queen Victoria approved an Order in Council prepared by the British Government to establish Australia’s very first mint at or near Sydney, in New South Wales. Although it was initially envisaged that the Sydney Mint would produce imperial design sovereigns, it was decided that, as the coins would be legal tender only in the colonies, a design specifically attributed to the Sydney Mint should be produced.

Two years later the designs had been approved. Dies produced at the Royal Mint London, and dated 1855, were despatched to the Sydney Mint which had been established on the site of the old Rum Hospital in Macquarie Street. The mint began receiving gold on May 14, 1855, and issued its first sovereigns soon after on June 23.

Though the reverse side featured a uniquely Australian design, with the words Australia and Sydney Mint featured boldly, the obverse side was similar to English coins with the plain, ribboned head of Queen Victoria. The reverse design has fascinated historians and collectors alike for decades. The coins were inscribed with the national name, Australia, even though the country was operating as separate colonies. Australia did not operate under a single government until Federation in 1901.

The Australian flavour of the nation’s gold coinage was strengthened in 1857 when the design was altered to incorporate a sprig of banksia in the Queen’s hair.

In 1871, approval for the Sydney Mint design was abruptly revoked and Australian Sovereigns once again took on the traditional British flavour. Not only was the banksia removed from Queen Victoria’s hair, but two new reverse designs were also introduced, the traditional British St George and the Dragon, and a shield design, which ran in parallel.