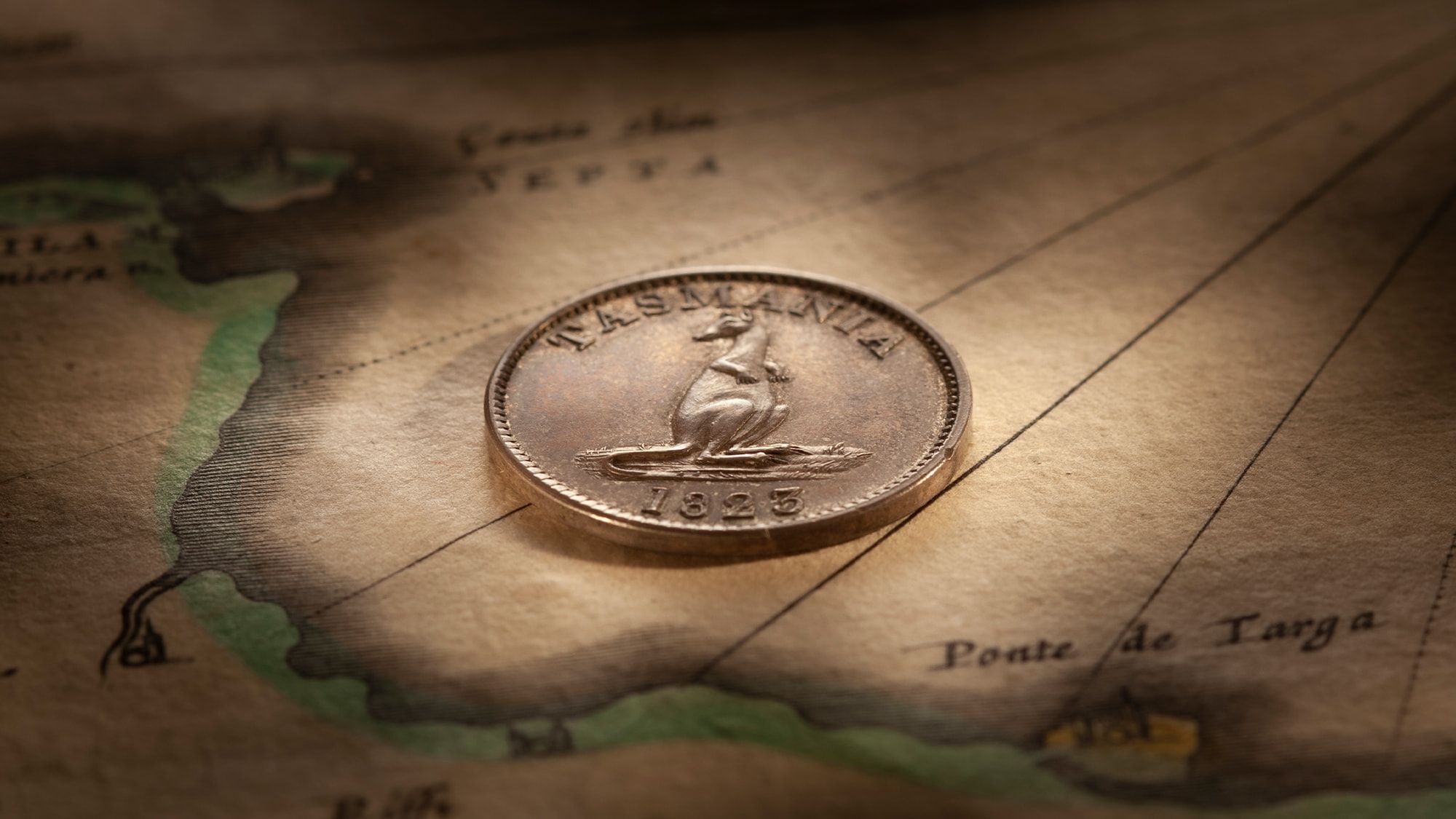 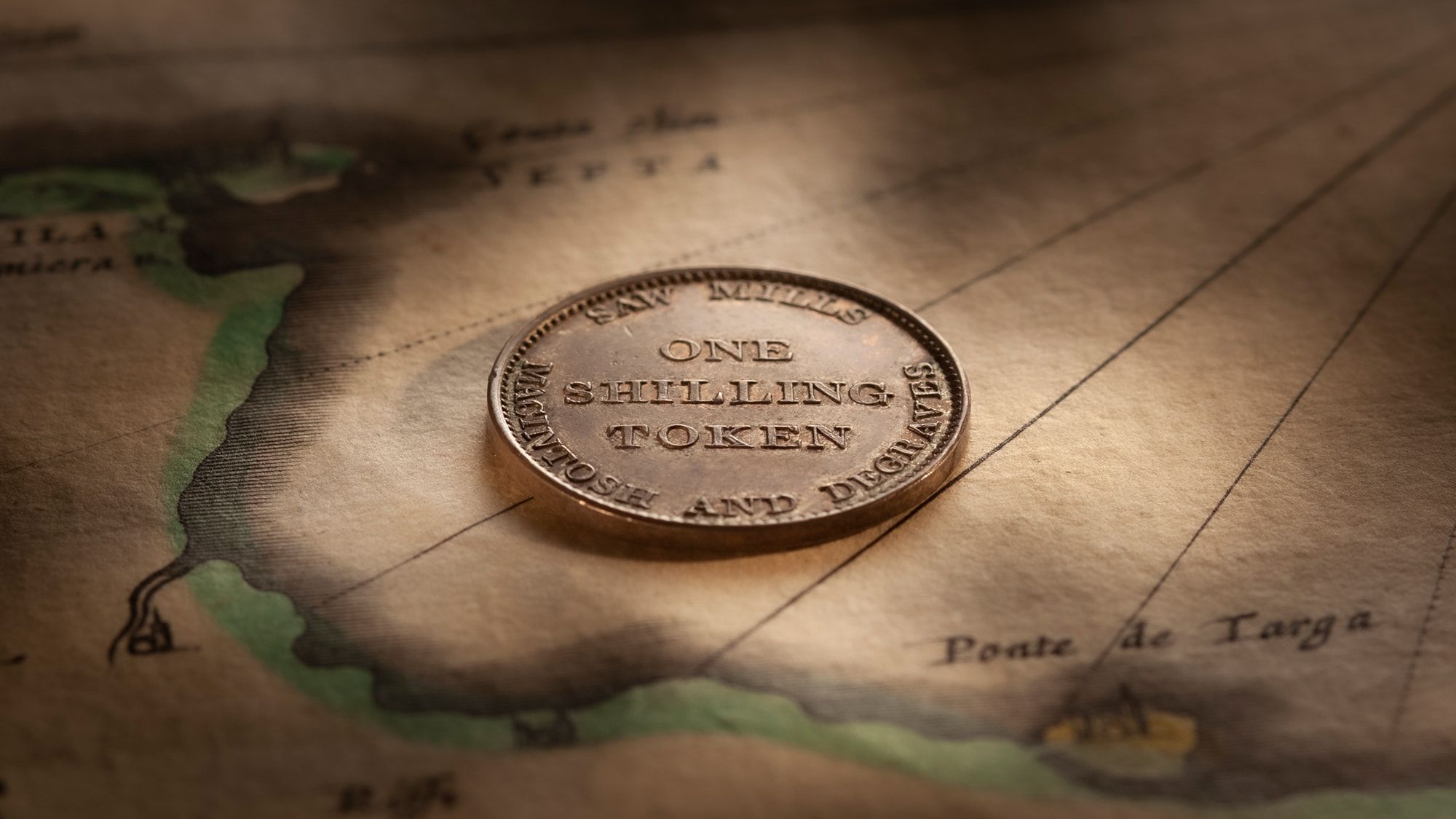 1823 Macintosh and Degraves Tasmania Silver Shilling
COIN
1823 Macintosh and Degraves Tasmania Silver Shilling
PRICE
$30,000
STATUS
Available now
QUALITY
Nearly Uncirculated, a brilliant strike, brown / grey toning with underlying proof-like brilliance and one of the finest known.
PROVENANCE
Spink & Son London sold to Guy Newton-Brown by private treaty 1968. Nobles Auction July 1998 in the liquidation of Newton-Brown's Collection, selling for $12,100 on a pre-sale estimate of $12,000. Nobles Auction 2005, selling for $30,000 on a pre-sale estimate of $25,000
COMMENTS
Hugh McIntosh and Peter Degraves sailed from England to Hobart Town in 1824 to build a saw-mill. A few years ahead of their departure they financed the striking of Tasmania’s first one shilling emblazoned with a kangaroo and the name 'Tasmania'. It was the earliest depiction of a kangaroo on an item of decorative art available for private ownership. And the first item of decorative art to feature the name Tasmania, rather than Van Diemen's Land. According to Australian author Greg Jeffreys these two gentlemen ultimately changed the course of Australia's history for by 1834 they had built two mills, founded the Cascade Brewery that today is Australia's oldest continually operating brewery. Spearheaded the establishment of Australia's oldest theatre, the Theatre Royal in central Hobart. And facilitated the writing of Australia's first novel by convicted forger and author, Henry Savery. This Macintosh & Degraves Shilling brings history to life with a direct link to two men who were "movers and shakers" in Tasmania’s colonial economy. 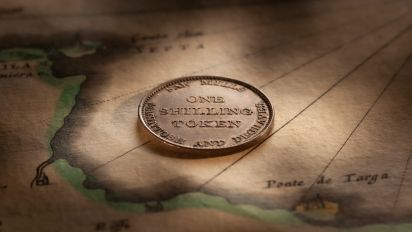 The industry acknowledges that there are perhaps thirty known examples of the Macintosh & Degraves Shilling. A minuscule number in anyone's language.

Of those, only two pieces are rated highly at About Uncirculated, with none higher. The two pieces are this shilling, formerly owned by barrister Guy Newton-Brown and that of the late Sir Marcus Clark.

An early written reference to the Macintosh & Degraves Shilling occurred in the 1864 Numismatic Chronicle by the President of the Royal Numismatic Society, William Sandys Wright Vaux.

He commented that the London National Collection had acquired a Macintosh and Degraves Shilling in 1848. 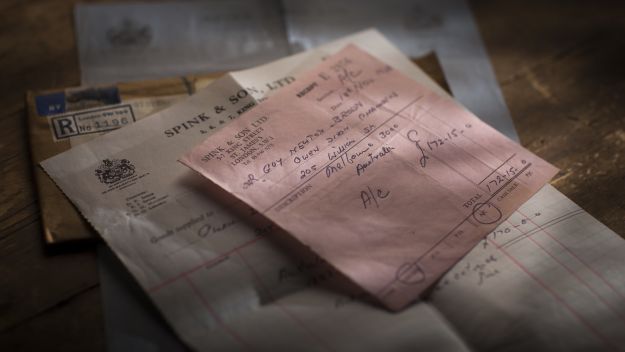 Major Hugh Macintosh
An ex-officer of the British East India Company, a veteran and a hero of some of India's bloodiest battles. After India, Macintosh went to Persia as a military advisor to the Shah and became a close friend and advisor to the Persian Crown Prince. He was a highly cultured man, a painter and violinist and fluent in five languages.

Macintosh emigrated from England in 1824 on his ship 'Hope'. After purchase of the ship, plants and material required to start a new life, it was documented that Macintosh still had disposable capital of £5000. (The more cash, the more land grant entitlements private citizens could expect.)

Hugh Macintosh was also in a relationship with Mary Reibey, an emancipated convict who by 1820 had become Australia's richest businesswoman. The plan for a private issuing of a silver shilling was said to have hatched from discussions with Reibey when she returned to England in 1821.

Peter Degraves
Degraves emigrated from England with his brother-in-law Hugh Macintosh. He was a brilliant engineer, inventor, architect and an innovative businessman. He was also a thief, a bully, a conman and a prolific liar and by 1850 one of Australia's richest, yet most ruthless men.

After his release in 1832, Degraves took over running and expanding the brewery. After the death of Macintosh in 1834, Degraves began falsifying the history of the Cascade Brewery, fabricating it for his own prosperity making sure that Macintosh was viewed as having played a minor role.

Research by Australian historian Greg Jeffreys showed that the major partner in the Cascade Mills and Brewery had actually been Macintosh.

The Macintosh and Degraves Shilling is one part of history that could not be altered with Macintosh's name before Degraves, acknowledging him as the main shareholder. This Shilling represents an historical truth that without Hugh Macintosh, the existence and success of the Cascade Saw Mill and Brewery would never have materialised.