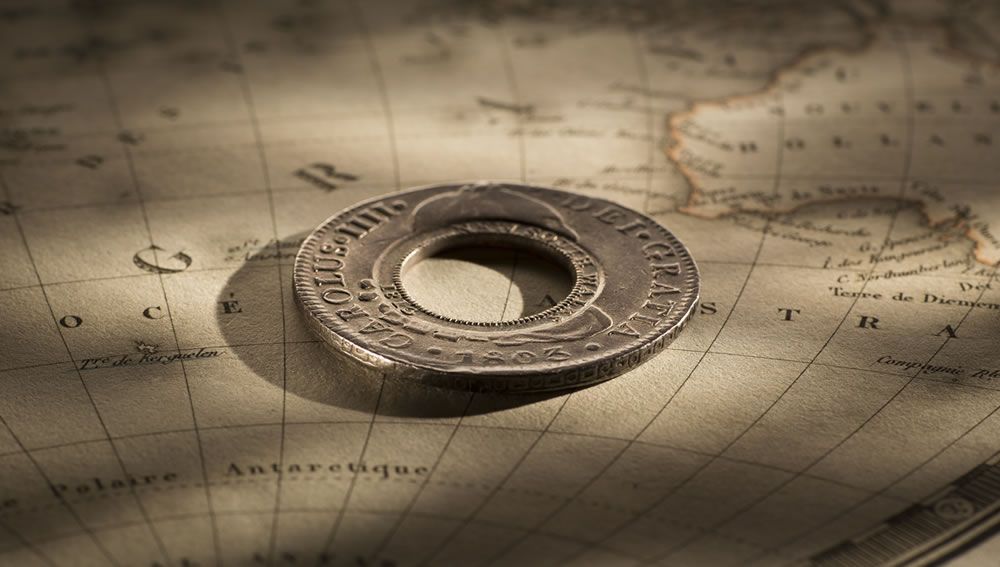 1813 Holey Dollar
COIN
1813 Holey Dollar
PRICE
$ 165,000
STATUS
Sold December 2016
QUALITY
Good Very Fine / Extremely Fine
PROVENANCE
Private Collector Melbourne
COMMENTS
This Holey Dollar was struck from a Spanish Silver Dollar that was minted in 1803 and depicts the portrait and legend of Charles IIII. The original silver dollar is graded Good Very Fine and has uniformly toned to a glorious, soft gun-metal blue grey. The surfaces are smooth and there is original lustre in the legend Carolus IIII. The counter-stamps New South Wales, 1813 and Five Shillings are of an exceptional nature: the lettering highlighted by original golden lustre and beautiful colours. The technical grading of the counter-stamps is Extremely Fine.
Enquire Now

The original Spanish silver dollar from which this Holey Dollar was created is uniformly toned a glorious, soft gun-metal blue grey colour. The surfaces are smooth. Look closely and you see that the coin has original lustre in the legend.  With a quality level of good Very Fine, it is a high calibre Holey Dollar and an exception to those most commonly found. The extensive use of the Spanish Silver Dollar as an international trading coin meant that most of the coins imported by Macquarie were well worn.

What we also know about this Holey Dollar is that after it was created by William Henshall it underwent minimal circulation for the counter-stamps New South Wales, 1813 and Five Shillings are of an exceptional nature: the lettering highlighted by original golden lustre and beautiful toning. The technical grading of the counter-stamps is Extremely Fine.

Consider that after delivering this Holey Dollar to the Deputy Commissary General’s Office in January 1814 along with the 39,909 other Holey Dollars, it was barely used. And that after the Holey Dollars and Dumps were officially demonitised in 1829 this coin survived the recall, and the eventual melting pot. It is simply miraculous.

It is a powerful piece.

The Holey Dollar is one of Australia’s most desirable coins. Talk to those fortunate enough to own one and they will tell you that the coin is the jewel in their collection. And that statement is made irrespective of the quality level.

A Holey Dollar can resemble a washer if it is well circulated. Or it can reach the heady quality heights of the record breaking Madrid Holey Dollar. Or it can be at a quality level somewhere in between. No matter the quality, the pleasure of ownership is immeasurable.

Once you move from the well circulated Fine and Good Fine quality levels up to the Very Fine and Good Very Fine echelons, and then further up again to the Extremely Fine levels the differences in quality at each level are noticeable and are clearly visible to the naked eye. It is the detail in the hair, the robes and the overall state of the fields. And it’s the edges.

The price of this coin reflects its outstanding quality attributes.