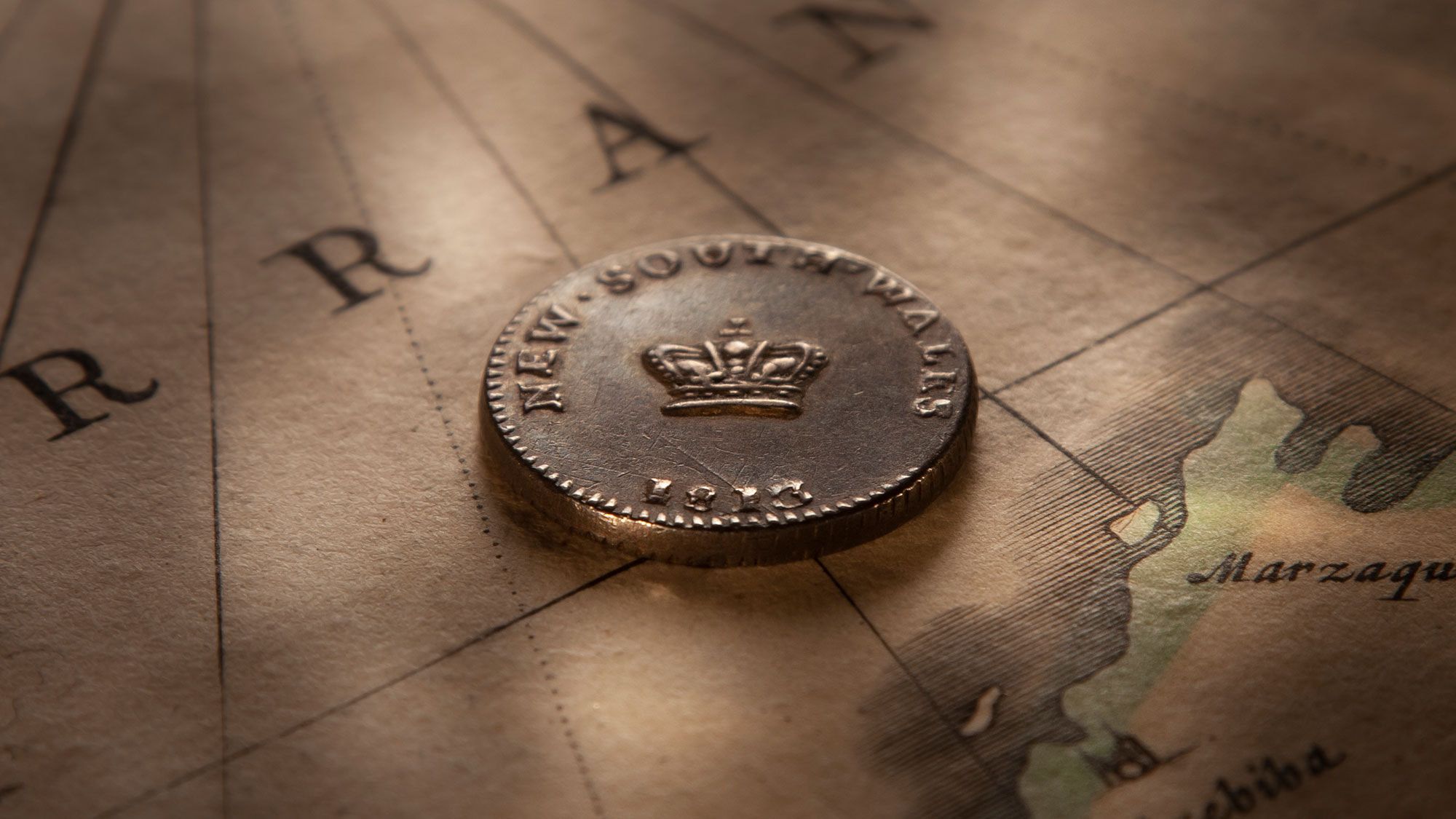 1813 Dump struck with the rare D/2 dies
COIN
1813 Dump struck with the rare D/2 dies
PRICE
$85,000
STATUS
Available now
QUALITY
Nearly Extremely Fine, supreme quality and exceedingly rare in this grade
PROVENANCE
Strathburn Collection
COMMENTS
The owner of this 1813 Dump is a foremost numismatist with more than fifty years of experience in the industry. As the owner of one of the best Holey Dollars he wanted a comparable Dump. The supreme quality of this piece was especially appealing for at Nearly Extremely Fine, the coin rests in the top five per cent of surviving examples. That the coin was struck using the very rare D/2 dies was a further influence on his purchase decision. As an 'old-time' collector he also valued its eye appeal, relishing the fact that he could hold the coin in his hand and see quite clearly its supreme attributes, not requiring an eye-glass. (The sign of a great coin). We close off with the comment that Coinworks has, over the last three years, sold some magnificent 1813 Dumps all of which have come back from clients that have held them for close to two decades. Some even longer. And that stock has been steadily diminishing. It is an ominous sign from a supply perspective. It may also be a sign that prices are set to rise. We have been commenting for a while about the lack of nice material out in the broader market place, and that includes the 1813 Dump. The message is obviously getting through. At last year's November Noble Numismatic Auction, a well circulated Dump that was five grades lower than this coin (at About Very Fine) sold for nearly $42,000. 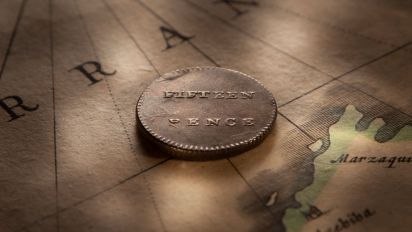 The 1813 Dump holds a very special place in Australia's history as the nation's first coin. It is a classic Australian numismatic rarity, as is the 1813 Holey Dollar, the 1852 Adelaide Pound, the Square Penny and the 1930 Penny.

Its status as Australia’s first coin ensures that it will always be sought after and strengthens its investment value.

Its investment value is also enhanced by its rarity for we estimate that perhaps eight hundred examples are available to collectors, less than fifty of which are in the upper quality levels.

Five reasons why this 1813 Dump became part of the Strathburn Collection.

1. High quality, in the top five per cent

The 1813 Dump circulated widely in the colony, the extreme wear on most Dumps evidence of its extensive use. The average quality Dump is graded at Fine to Good Fine, with this coin six grades higher at Nearly Extremely Fine. We rate it in the top five per cent of surviving examples.

The minimal wear to this coin is shown in the crown, the fleur de lis complete and the pearls on either side of the crown crisp and dainty. Flip the coin over and the words FIFTEEN PENCE are also highly detailed.

The coin has obviously been cherished for it has been brilliantly preserved with beautiful toning and highly reflective fields.

2. Extraordinary strike for a D/2 Dump

Historians suggest that 25 per cent of surviving Dumps were struck using the D/2 dies. (The most readily available being the A/1 Dumps at 70 per cent.)

They also suggest the D/2 dies were quite possibly the first combination used and their usage discontinued because the dies were too large for the silver disc. An examination of the surviving D/2 Dumps supports this contention for most have a partially struck legend 'NEW SOUTH WALES' with the top of the words non-existent. And a partially struck date '1813', with the bottom half of the numbers non-existent. This coin being an exception.

3. Strong denticles that are not always seen

The denticles around the edge of the coin are evident, which again in a D/2 example is not usual.

Notice the oblique milling around the edge. It is fully evident. (The edge milling was used as deterrent against clipping whereby the unscrupulous shaved off slivers of silver, reducing the silver content of the Dump. And making a small profit on the side.)

5. And the pièce de résistance ... evidence of the original Spanish Dollar design, an aspect that really counts.

While the Holey Dollar clearly shows that it is one coin struck from another, in a less obvious way so too can the Dump. The design detail of the original Spanish Dollar from which this Dump was created is evident on the obverse, both above and below the crown. We refer to it as the under-type and it is not always present. Its existence re-affirms the origins of the Dump and is highly prized. 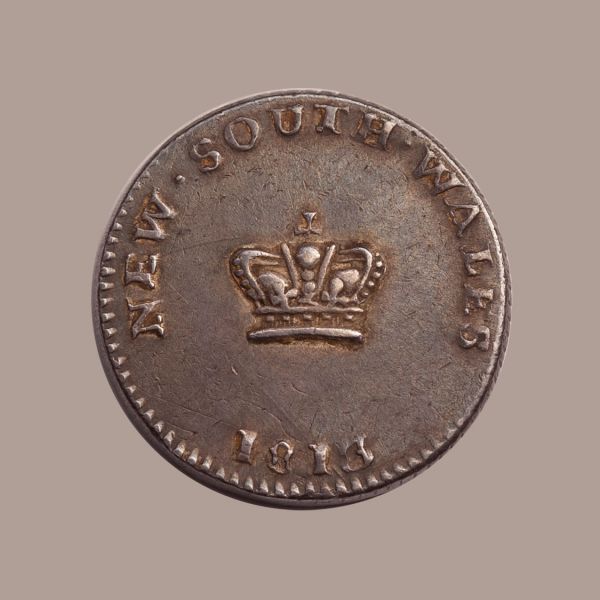 The obverse has smooth and highly reflective fields with stunning grey / blue toning. The legend 'NEW SOUTH WALES' is contained in the coin as is the date '1813'. On both left and right in the crown, the fleur-de-lis are complete, the pearls crisp. A stop is clearly seen after 'NEW' and 'SOUTH' in the legend. The dies apparently had shallow depressions for these stops which soon filled with debris and can be difficult (or almost impossible) to discern on pieces even in reasonable condition. 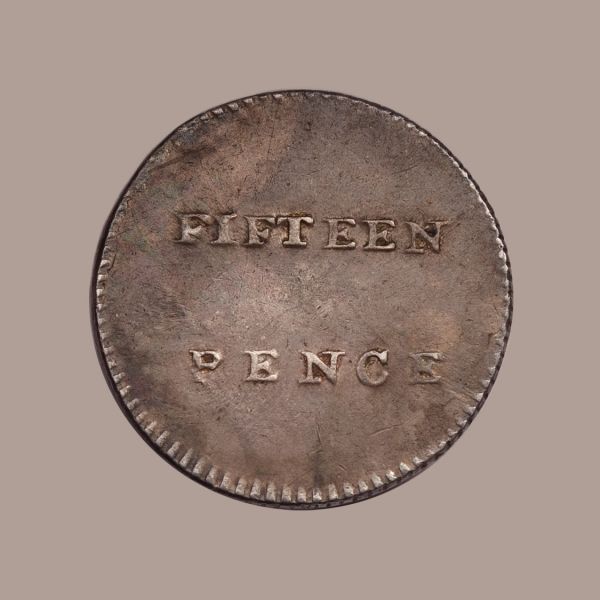 The reverse also is smooth and has highly reflective fields with stunning grey / blue toning.