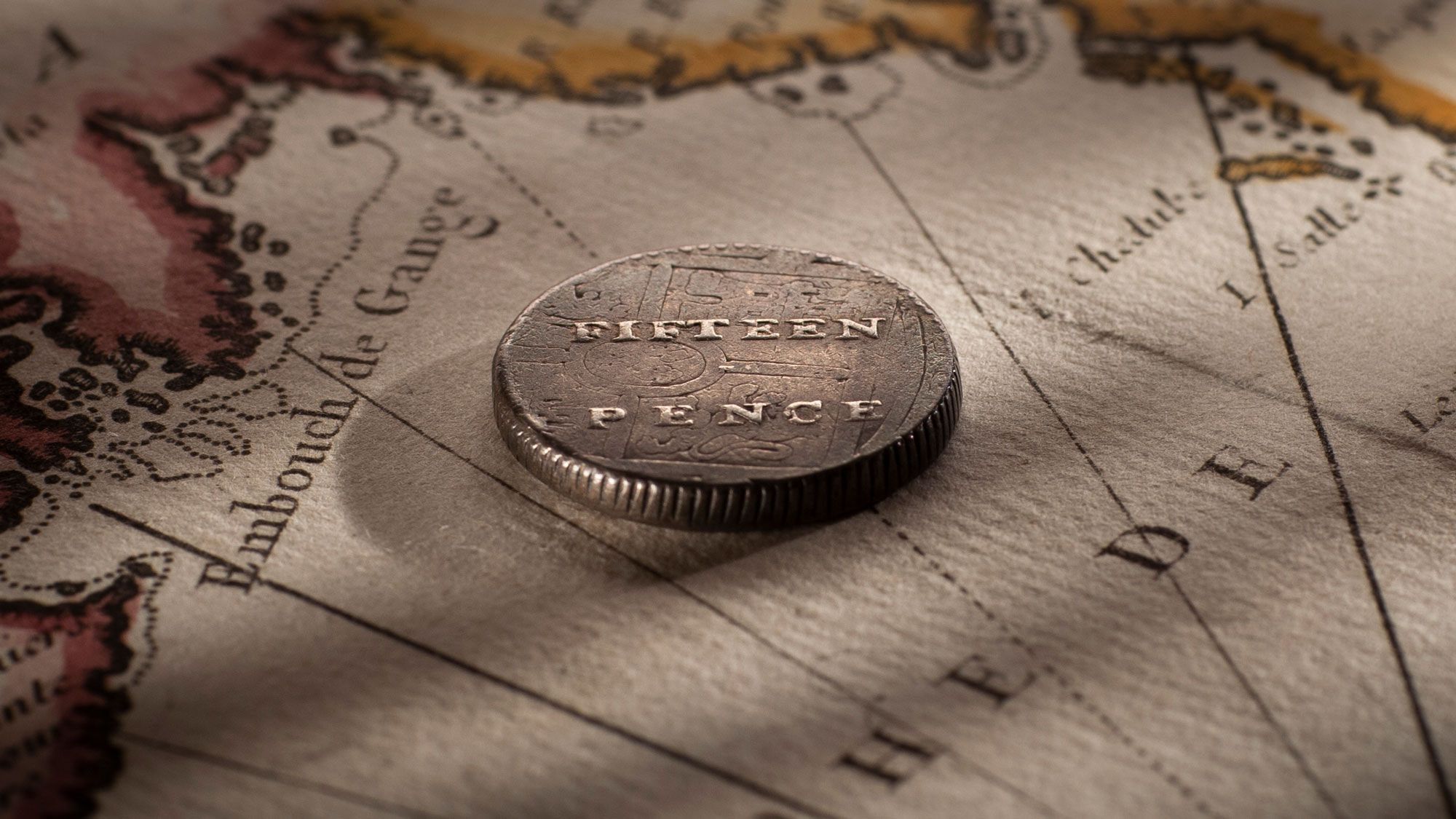 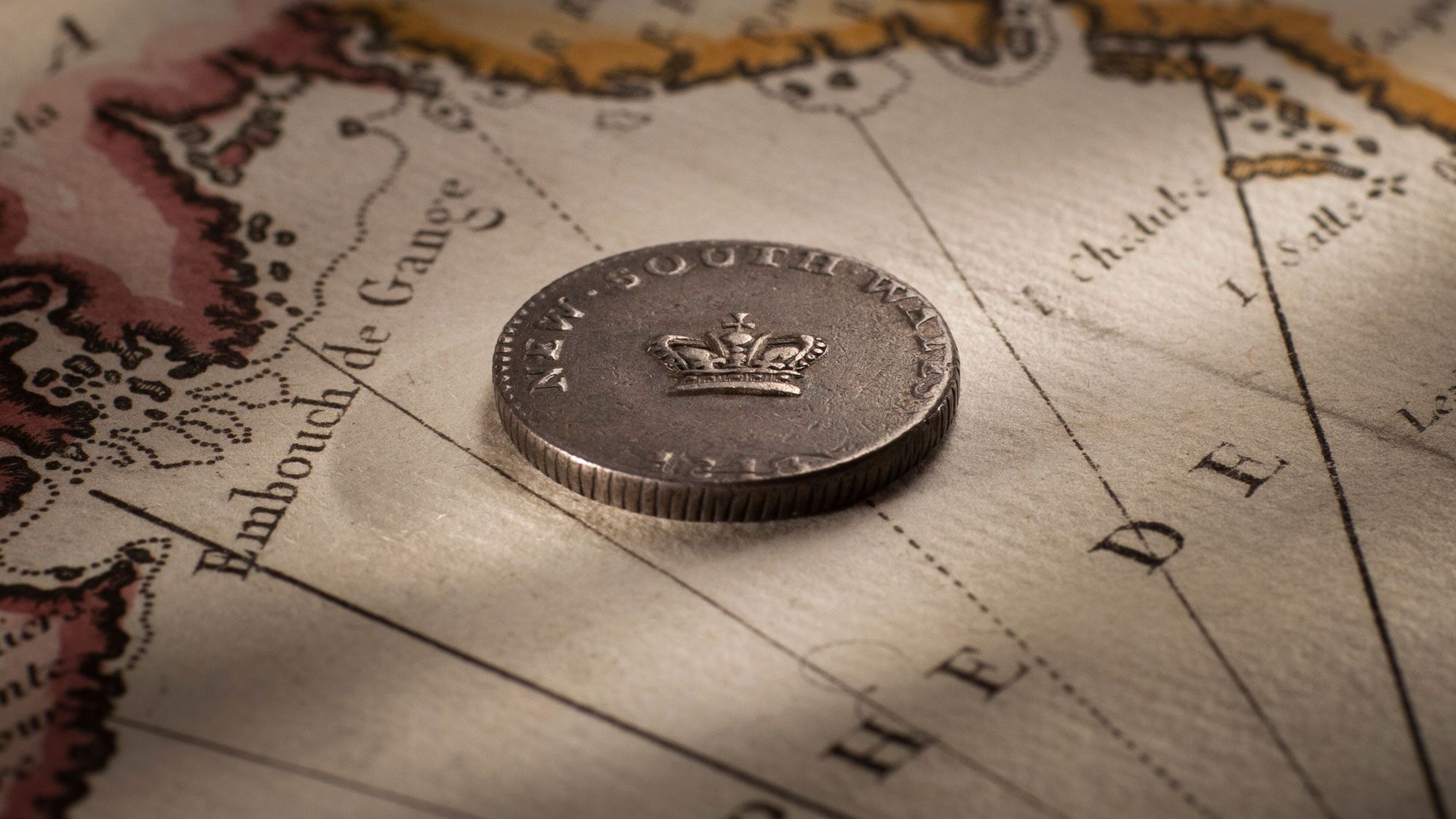 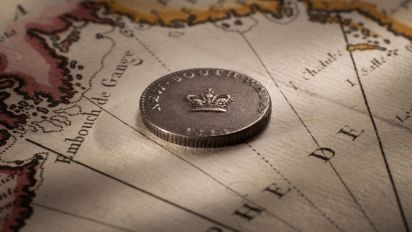 The clarity of the original Spanish Dollar design is not the only redeeming feature of this 1813 Dump. Scrutinise the reverse, as shown above, and between the words 'FIFTEEN' and 'PENCE' there is the capital letter, 'H'.

William Henshall was determined to leave a permanent reminder of his time as Mint Master when he crafted his initial into some - but not all - the Dump dies.

Its presence is highly prized.

Over and above the original Spanish Dollar design and the 'H' for Henshall, this 1813 Dump was struck using the D/2 dies, and when you are talking the 1813 Dump, the D/2 dies equate to rarity.

Historians have determined that several different dies were used in the striking of the 1813 Dump resulting in four different styles. For ease of reference, they are referred to as the A/1, D/2, C/4 and E/3 dies.

While the crown, the date 1813, the legend New South Wales and the value fifteen pence, is common to all four dies, they appear in different formats and slightly different positions giving each style its own distinct nuance.

There is conjecture that the C/4 and E/3 dies might have been contemporary forgeries. Or perhaps trials before Macquarie gave his final approval. They are crude and less than 5 per cent of surviving examples are linked to these two dies.

The most aesthetically pleasing and popular styles are the A/1 and D/2 types, with the D/2 being the scarcer of the two, the A/1 appearing in 75 per cent of surviving examples, the D/2 in 20 per cent.

Now let's talk quality and in the case of this Dump, at Good Very Fine / About Extremely Fine we are talking high quality.

The Holey Dollar and Dump were struck to create a medium of exchange in a colony starved of currency.

Governor Lachlan Macquarie enlisted the services of emancipated convict, William Henshall, to cut a hole in 40,000 Spanish Silver Dollars, creating two coins out of one.

The buyer that pursues a top quality Dump will find the task extremely challenging. It can be years before a premium quality example comes onto the market.

The Dump circulated widely in the colony, the extreme wear on most Dumps evidence that they saw considerable use. So, while the Dump may seem the diminutive partner of the Holey Dollar, the reality is "top quality" Dumps have authority. 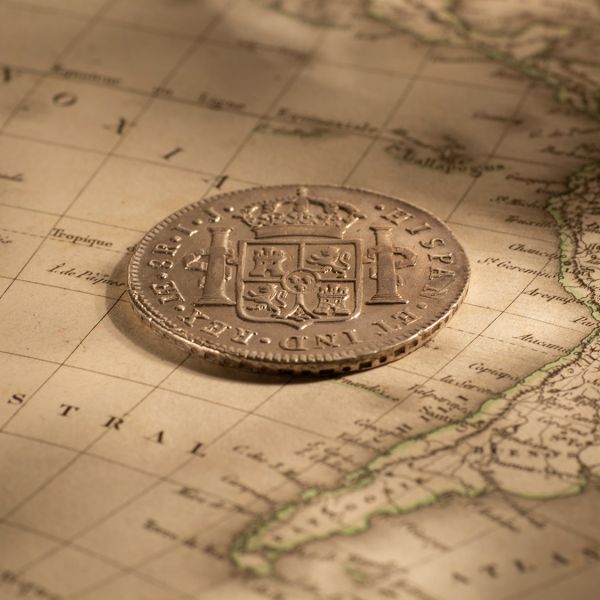 Compare the remnants of the Spanish Silver Dollar design on the Dump, with the dollar shown above. Note the castle and the lion in the central part of the design.

So let's define the words "top quality" and establish the levels that are rarely seen.

Every circulated coin has a grading level at which serious rarity kicks in. That is the point at which the balance between acquiring a coin as a collectible - and as an investment - shifts more towards the latter. For the 1813 Colonial Dump that point is Good Very Fine.

The chart below clearly shows that securing a Colonial Dump in a quality level of Good Very Fine or better is a difficult task. We would sight a Good Very Fine Dump on the open market perhaps once or twice every year. 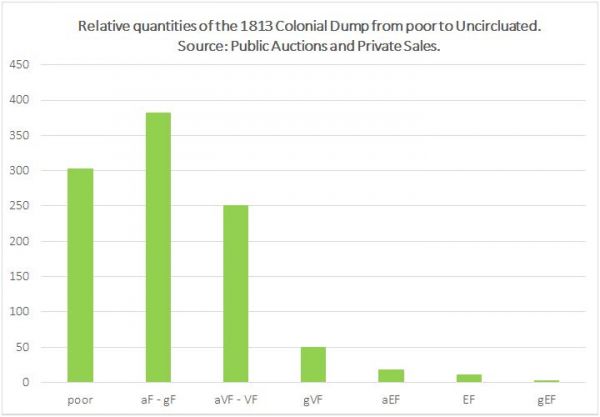