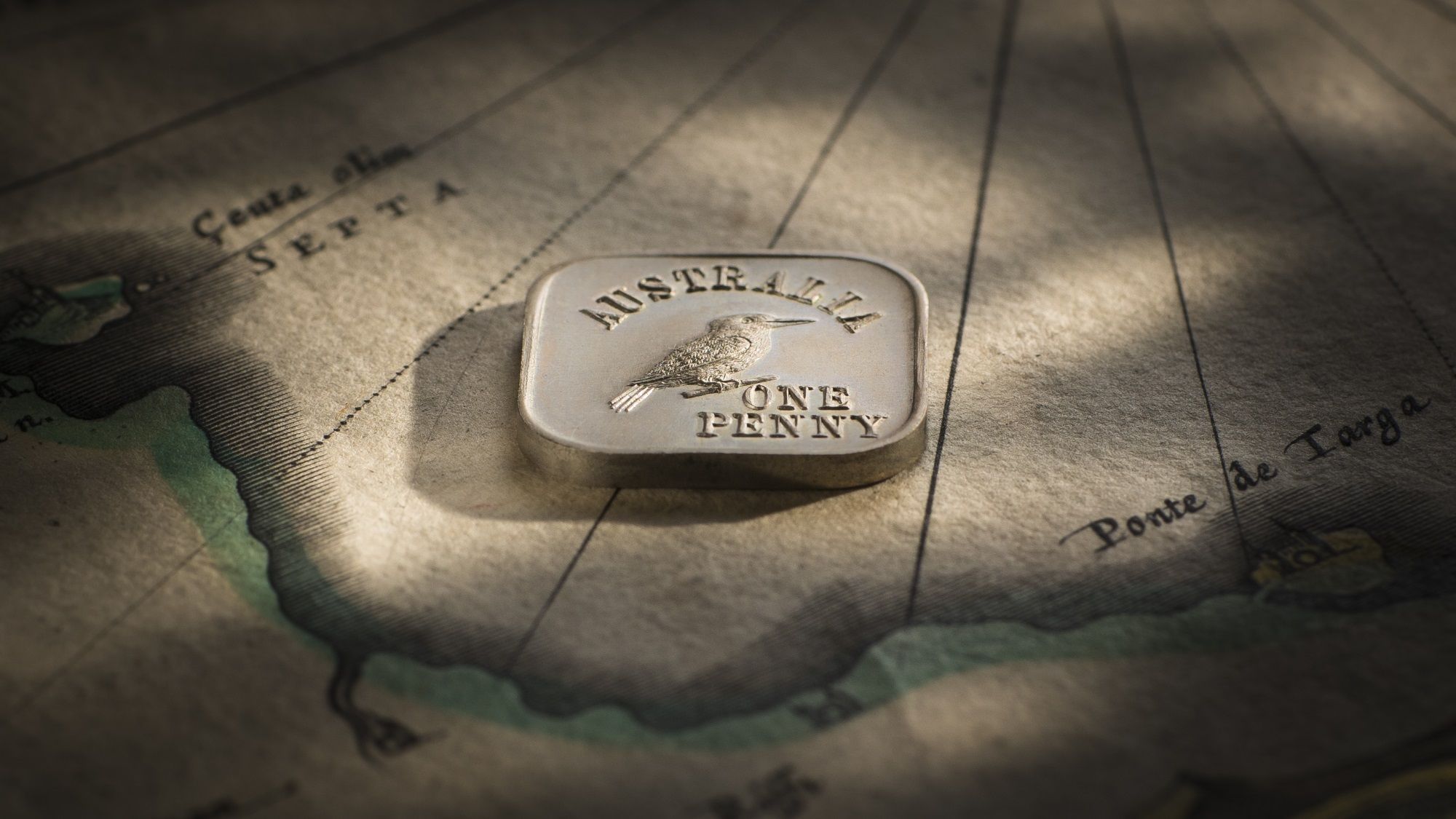 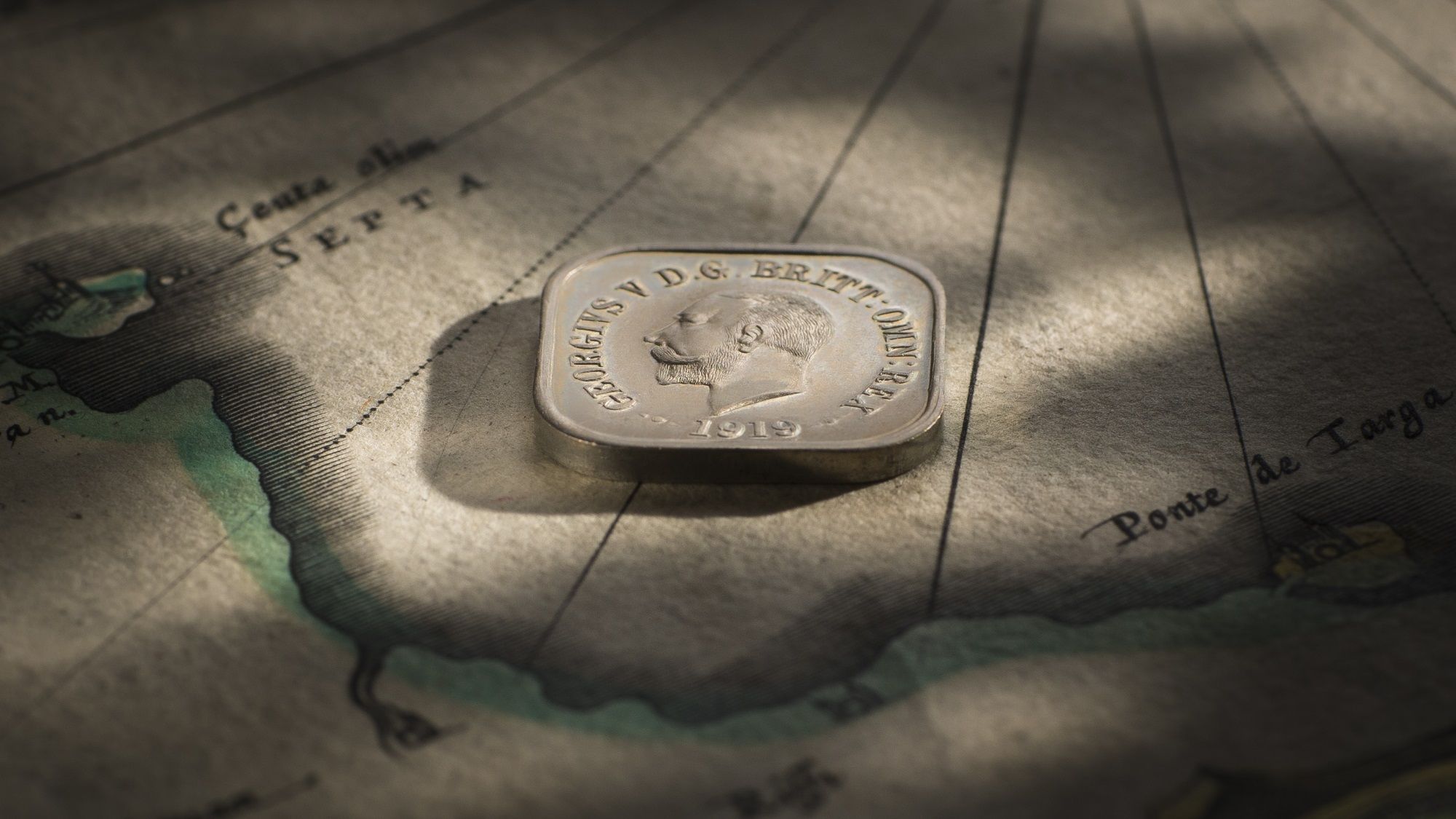 Collection of Square Kookaburra Coins 1919 - 1921 (6 pieces).
COIN
Collection of Square Kookaburra Coins 1919 - 1921 (6 pieces).
PRICE
As detailed below.
QUALITY
As detailed below.
PROVENANCE
Private Collection Victoria.
COMMENTS
So often we hear the term 'rare' used to describe a coin. The reality is the word 'rare' is rather loose unless it is quantified. What sets Coinworks apart from all other dealers is that we have the knowledge and the experience as Australia's only rare coin specialist to quantify the term 'rare'. We are major buyers - and sellers - of the Kookaburra coins and yet over the last forty years, we have sold only three 1920 Type 9 Square Pennies. We have also sold just three of the 1919 Type 5 Square Penny. Slightly more (one more) of the 1919 Type 6 Square Penny with four sold. And yes the 1921 Type 11 Square Penny is 'more readily' available than those we have mentioned previously, but it is still an amazingly difficult coin to procure. We checked and could account for only seven coins sold. And that's not sales per year. That is the total number of coins sold over a period of forty-plus years.

The Collection of Kookaburra Coins.

A fascination with the Square Kookaburra coins took one of our clients on a journey that lasted for decades. As a country Victorian he was particularly engaged by the kookaburra design.

Given the rarity of the coins involved, he enjoyed the challenge that the series presented. He also knew that he could space his purchases over a considerable number of years.

A builder by profession, an eye for exactness was required in his trade. That skill was put to good use in the selection of his coins for all of the pieces on offer are superb for quality, with coins such as the Type 6, shown above, the absolute finest of its design type.

We would go one step further to say that in our view the Type 6 is perhaps the finest example of any Square Penny that we have seen. (Of any type.) It is that good.

The Type 5 and the Type 9 are equally noteworthy as being the finest that we have handled of their design type.

The very reason why these three coins were exhibited in 2007 in Melbourne in the 'Kookas in the Cathedral' Exhibition hosted at the ANZ Bank.

And that's not to talk down the Type 3 and the Type 11 offered in this collection, which are both amongst the finest we have seen or handled.

It is a fact that the Kookaburra coins are particularly difficult to find in premium quality. The reason is simply that the coins were test pieces and were not struck to the exacting standards of proof coining.

Given to dignitaries to assess their reaction, there was no packaging and we know that not every dignitary was a collector and would have handled them with the utmost care.

Some of the coins must have been tucked into a fob pocket for they have circulated. Others could have rattled around a top drawer. Or been passed around to colleagues ... introducing a multitude of chances for mishandling.

The Square Penny and the Square Halfpenny was brought to the attention of the Australian collector market in 1954 when Sir Marcus Clark O.B.E. sold his extensive collection of Australian coin rarities.

It is on record that his 1921 Square Penny and 1921 Square Halfpenny sold for £36. Even more interesting is that in the same auction an Extremely Fine Ferdinand VII Holey Dollar sold for just over twice that amount at £72 10/-. (The Holey Dollar is now a $450,000-plus item.)

The popularity of the kookaburras continued throughout the 1960s with extensive reporting of their appearances occurring in the then industry magazine, The Australian Coin Review.

Strong collector and investor interest in the Square Kookaburras continues to this day. 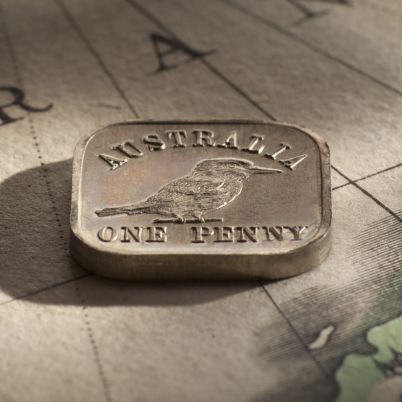 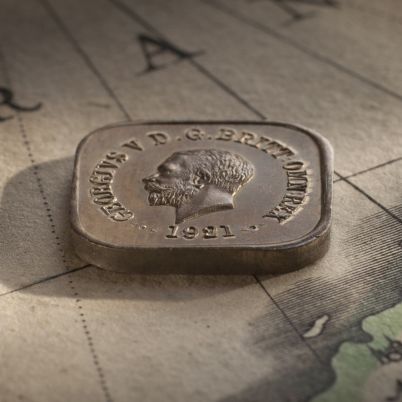 This piece is referenced as the Renniks Type 11 and was tested by the Melbourne Mint in 1921.

It is, in our view, the perfect starting point for the buyer looking for a Kookaburra Penny. Rarity but at a price that is palatable.

This coin has uncompromised, superb quality.

Proof like surfaces, handsome toning and a deeply etched design of a sleek kookaburra resting on a twig.

The coin is also extremely rare.

Over the last forty-six years, we have sold only seven examples of the 1921 Type 11 Square Penny, this coin being one of them.

The coin came into the Coinworks stable of rarities in 2002, acquired from a Sydney dealer.

It is noted that the current vendor is its second only owner since it has been under our control. A statement on its quality. (Collectors tend to hold onto high calibre pieces.)

This piece is, in our view, the absolute finest of its design type.

We would go one step further to say that it is perhaps the finest example of any Square Penny that we have seen. It is that good.

No surprise therefore that the coin was chosen as the representative example of its type in the 'Kookas in the Cathedral' Exhibition held at the ANZ Bank in 2007.

Over the last forty six years, we have recorded the sale of four examples of the 1919 Type 6 Square Penny, this coin being one of them. 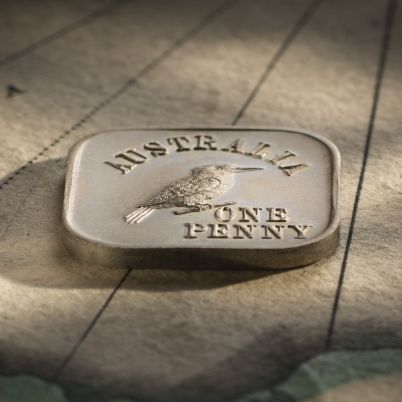 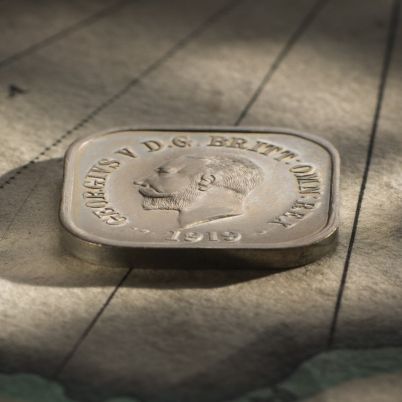 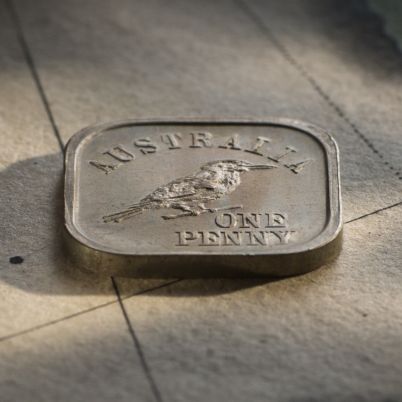 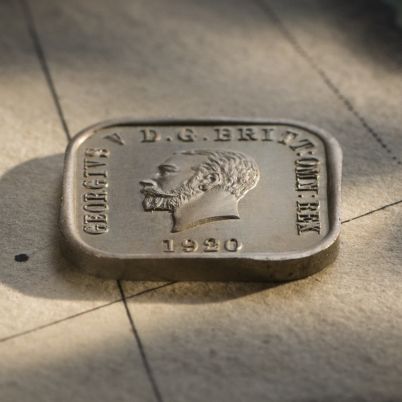 An extremely rare piece, we have recorded the sale of only three 1920 Type 9 Square Pennies over the last 46 years, this coin being one of them.

This particular Type 9 is distinctively brilliant for quality. Proof-like on both obverse and reverse, the obverse in particular has handsome golden toning.

A strong statement given that the 1920 dated coins are noted for dull surfaces and inconsistencies in their toning. (Even the Type 9 that was offered several years ago at auction from the Melbourne Museum Collection was noted as having a metal flaw.)

It is the rarity and the distinct square legend style that has made this coin inordinately popular with collectors and investors.

An extremely rare piece, we have recorded the sale of only three 1919 Type 5 Square Pennies over the last 46 years, this coin being one of them.

There is however another aspect to the Type 5 that adds to its collector appeal.

It has a unique design. No other Square Penny bears the kookaburra design of the Type 5.

This coin has a deeply etched design, smooth fields and attractive toning.

And was chosen as the representative example of its type in the 'Kookas in the Cathedral' Exhibition held at the ANZ Bank in 2007. 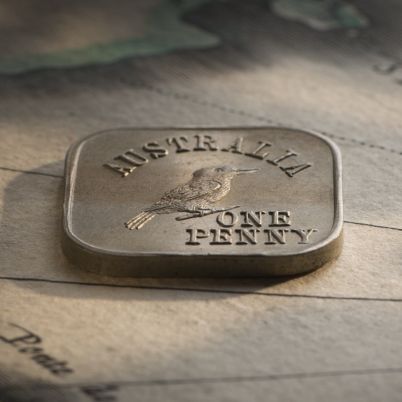 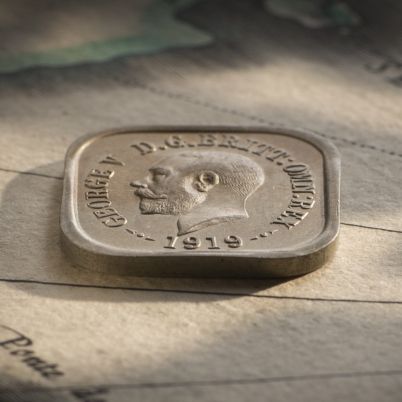 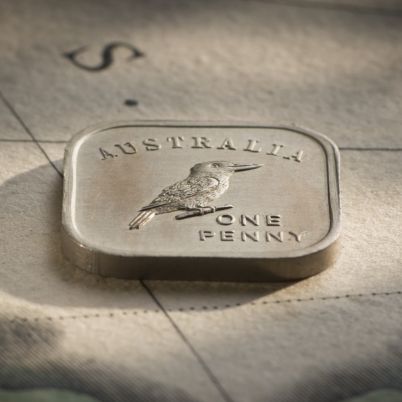 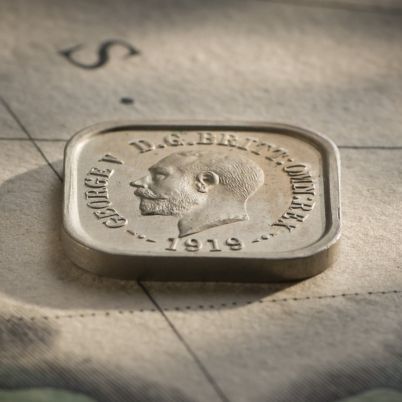 Over the last forty six years, we have recorded the sales of six examples of the 1919 Type 3 Square Penny, this coin being one of them.

And that's quite OK.

The coin is still extremely rare in the market place (compare it to the availability of the 1930 Penny) but comes at a price that is palatable for the majority of collectors.

To add further to its appeal, the Type 3 has a unique design. No other Square Penny bears the kookaburra design of the Type 3.

The Square Penny collector that aspires to completion will, at some stage, have to contemplate the purchase of a Square Halfpenny.

Now there are NOT a lot of options when it comes to the Square Halfpennies. The coins were only struck in two years, they being 1920 and 1921, immediately limiting the choices.

Which is why the 1921 Square Halfpenny is so popular.

It is still extremely rare. We would estimate that perhaps nine to ten examples are known.

And it is, relatively speaking, reasonably priced.

This is a well detailed 1921 Square Halfpenny with light streaky toning. 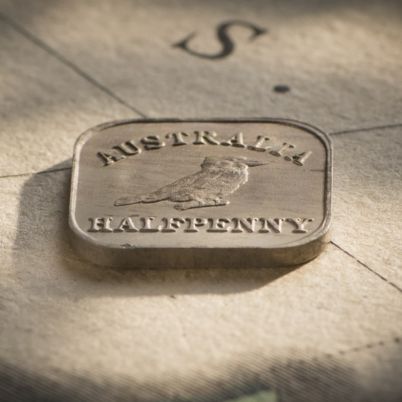 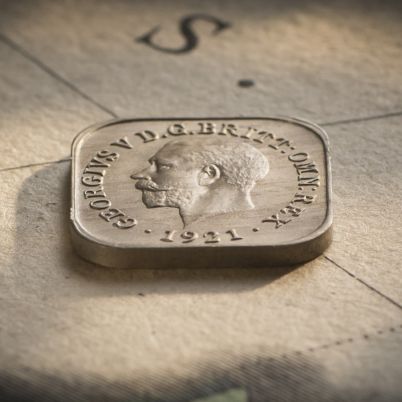 The history of the Kookaburra Coin Series.

No one could have envisaged in 1919 when the Australian Government directed the mint master of the Melbourne Mint to strike the Square Penny that the coin would one day become a world class rarity.

In 1919, the Labor Government proposed a currency change to incorporate Australia’s native bird - the kookaburra - into the nation’s coinage. The Government wanted to break away from British designs and introduce a uniquely Australian style into our currency.

The mooted change was politically motivated, the Government seeking favour with the electorate.

A wave of nationalism was sweeping Australia post World War I and the Government saw advantage in tapping into the mood of the nation.

A kookaburra design and the depiction of the monarch without a crown were two of the elements of the new coinage that while highly contentious and provocative, the Government believed would now be accepted.

Only two different square halfpenny designs were tested in 1920 and 1921 and they are referenced the Type 1 and 2 respectively.

History indicates that over the three year period a total of 200 pieces, encompassing the various designs, were produced. And that’s not 200 of each. That’s a total pool of 200 coins.

But with only the 200 prototypes to show as evidence of the Government’s grand scheme, Australian coinage gained another wonderful coin rarity.