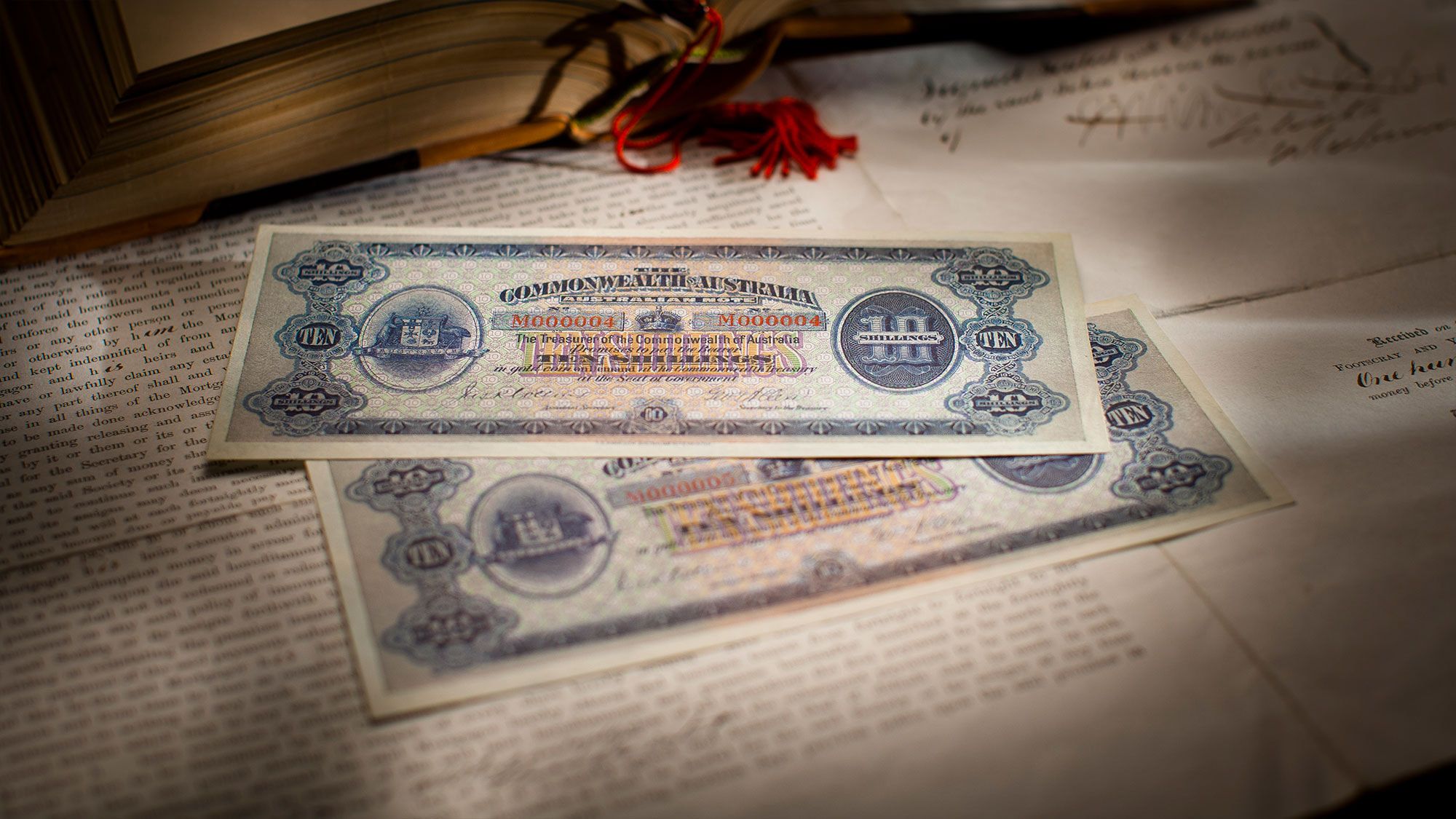 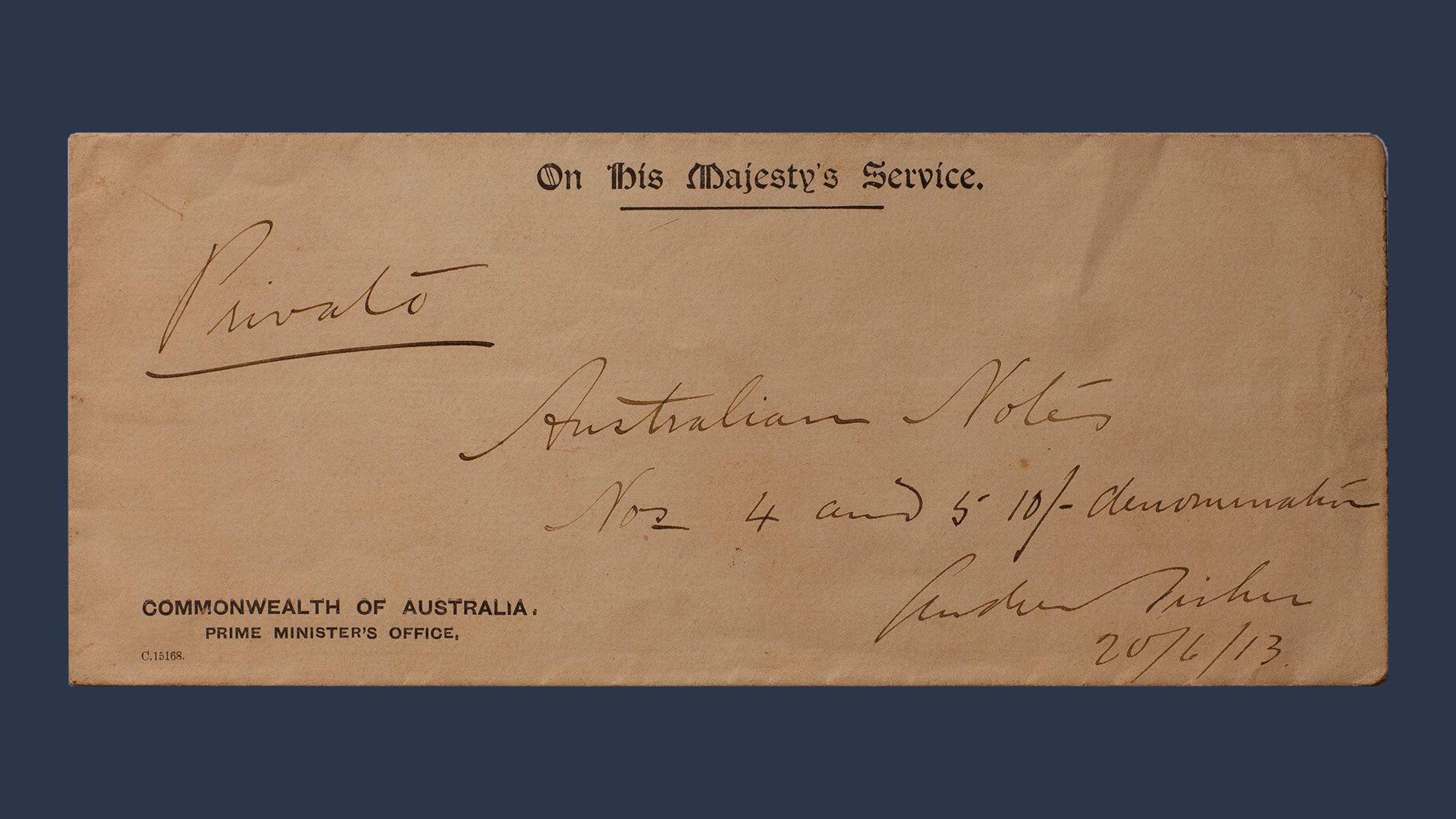 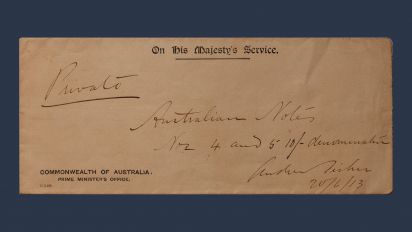 The rarity of the 1913 Presentation Note.

Andrew Fisher fulfilled a promise to the nation when he introduced the Commonwealth of Australia’s first banknote in 1913. The note, a Ten Shillings with the signatories of James Collins and George Allen, enjoyed a grandiose release on 1 May 1913 at Melbourne's King’s Warehouse in front of Australia's political and social elite.

The notes were printed in sheets of four and cut into single banknotes.

Precisely at 3pm, under the supervision of Note Printer Thomas Harrison, a numbering ceremony began, each note individually numbered by hand in red ink.

One hundred and two Presentation Notes were distributed by ballot to ensure a fair distribution, paid with the equivalent of a half sovereign.

History records that of the five hundred notes hand numbered at the ceremony, Presentation Notes numbered 1, 2 and 3 were gifted to the Governor General, Lord Denham, and his two children.

The remaining notes numbered 4 to 102 were distributed by ballot to thirty-six VIPs that attended the ceremony. (Several attendees requested and received multiples.)

Author Greg McDonald contends that notes 103 to 500 were either destroyed or went into circulation, the former the most likely scenario thereby maintaining the integrity of the presentation notes. (Our thanks to respected author and numismatist Greg McDonald for his extensive research on the 1913 Presentation Notes.)

Seventeen presentation notes have come to the market at auction over the last fifty-plus years. Our research confirms that most presentation notes show serious signs of mishandling with some accidentally making their way into circulation.

Only three out of the seventeen presentation notes come up for special mention for their exemplary state, with no folds, no tears, no pin holes. And no signs of wear. They being notes numbered 4 and 5 (received by Prime Minister Andrew Fisher). And note numbered 91, (received by Federal politician James Mathews).

The most recent sale at auction of a Presentation Note occurred in October 2020. The note numbered M000076, described as having a light centre fold and six small pin holes, sold at I.A.G. Auction for $109,800. The most recent private sale of a Presentation Note occurred in February 2022. The note numbered M000091 was offered by Coinworks for $120,000 and sold within one hour of its release. 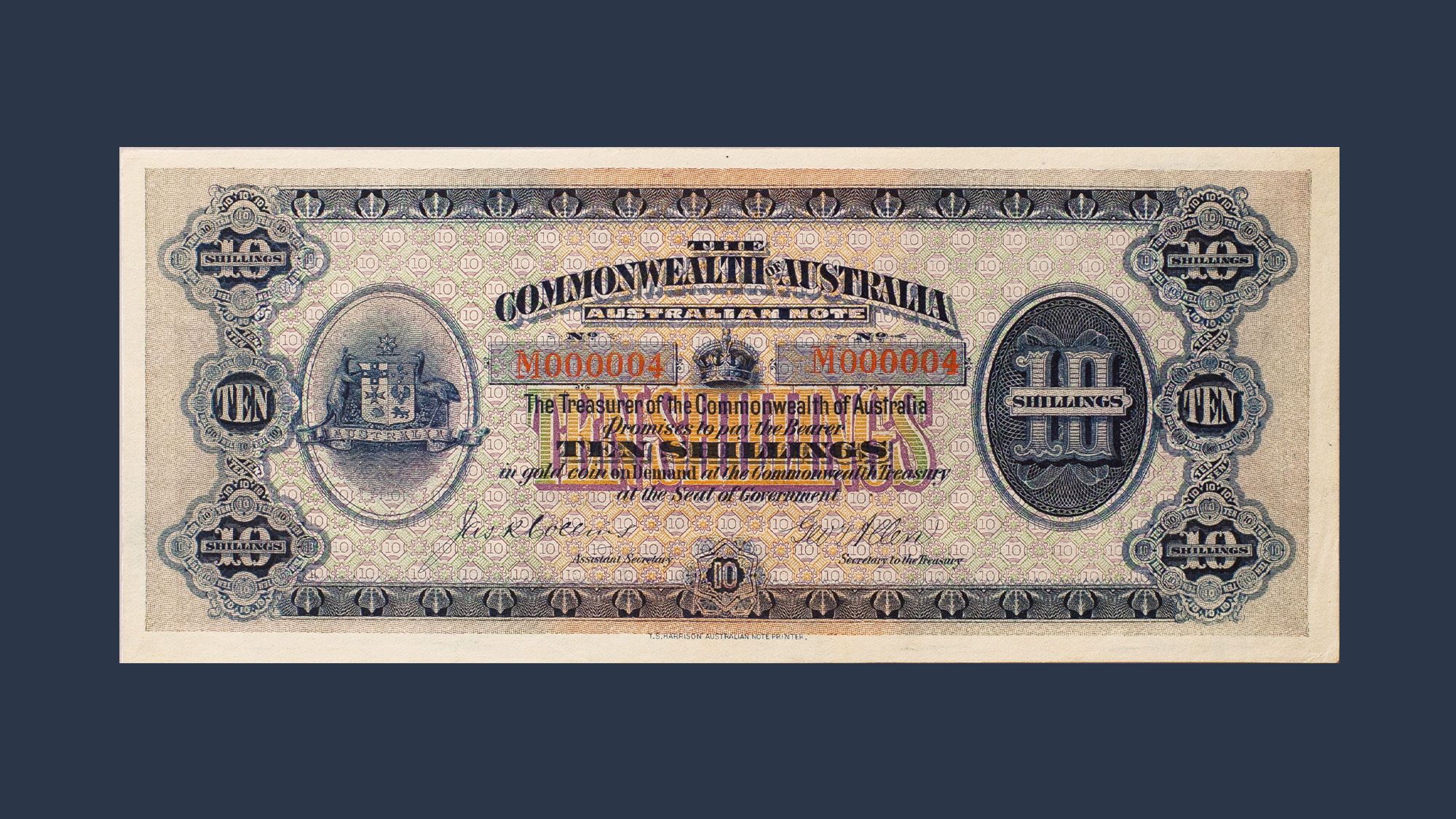 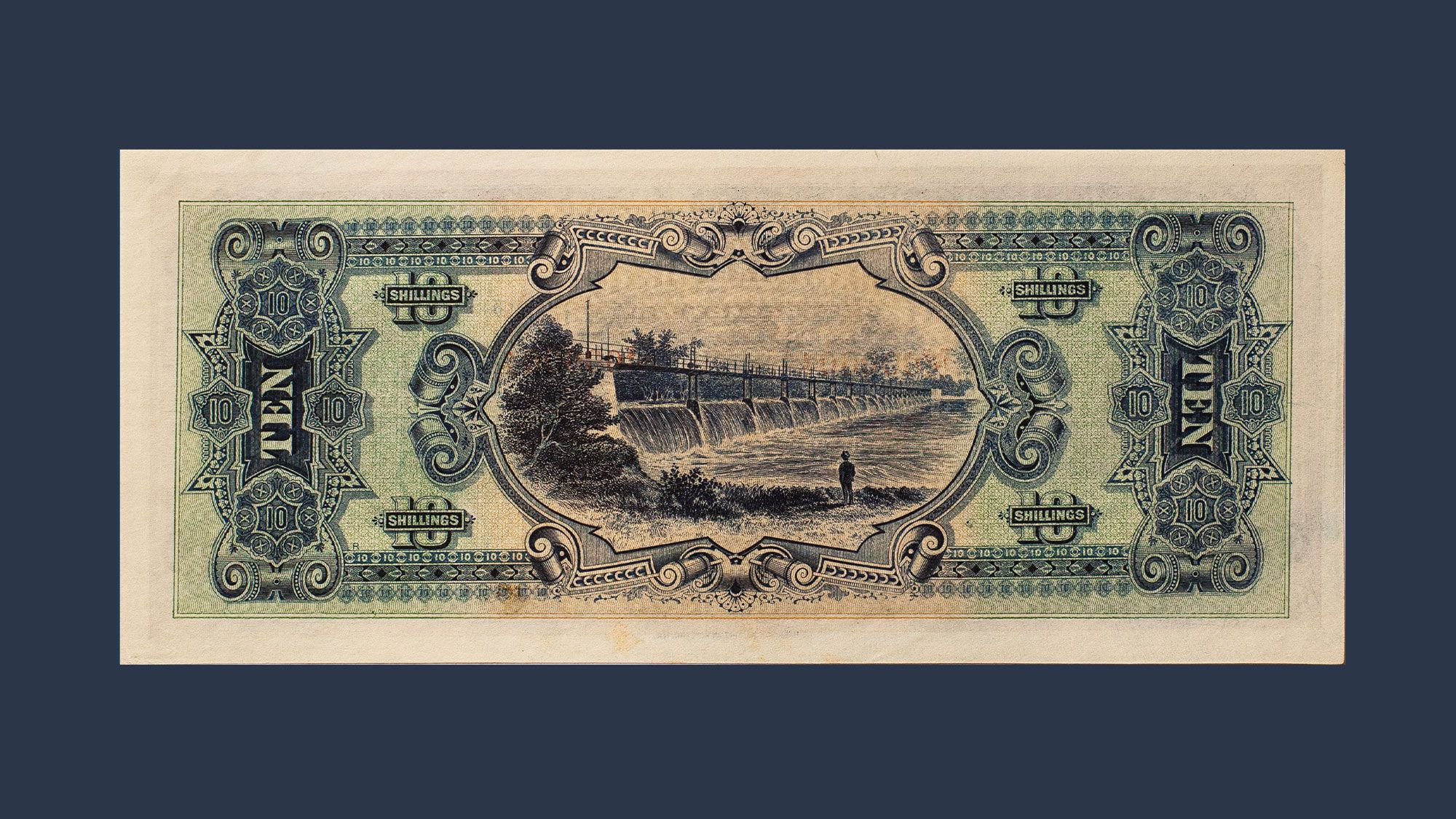 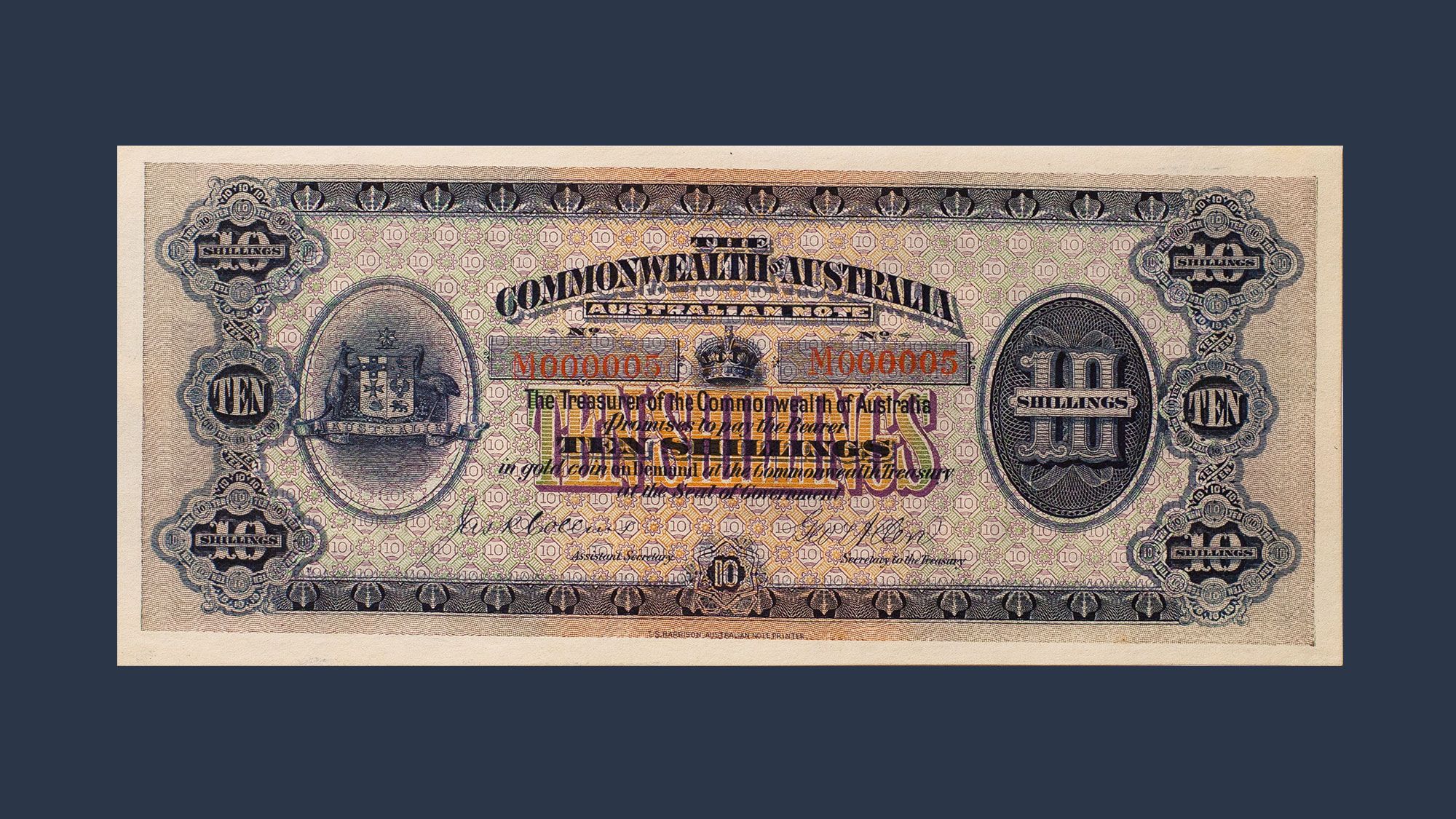 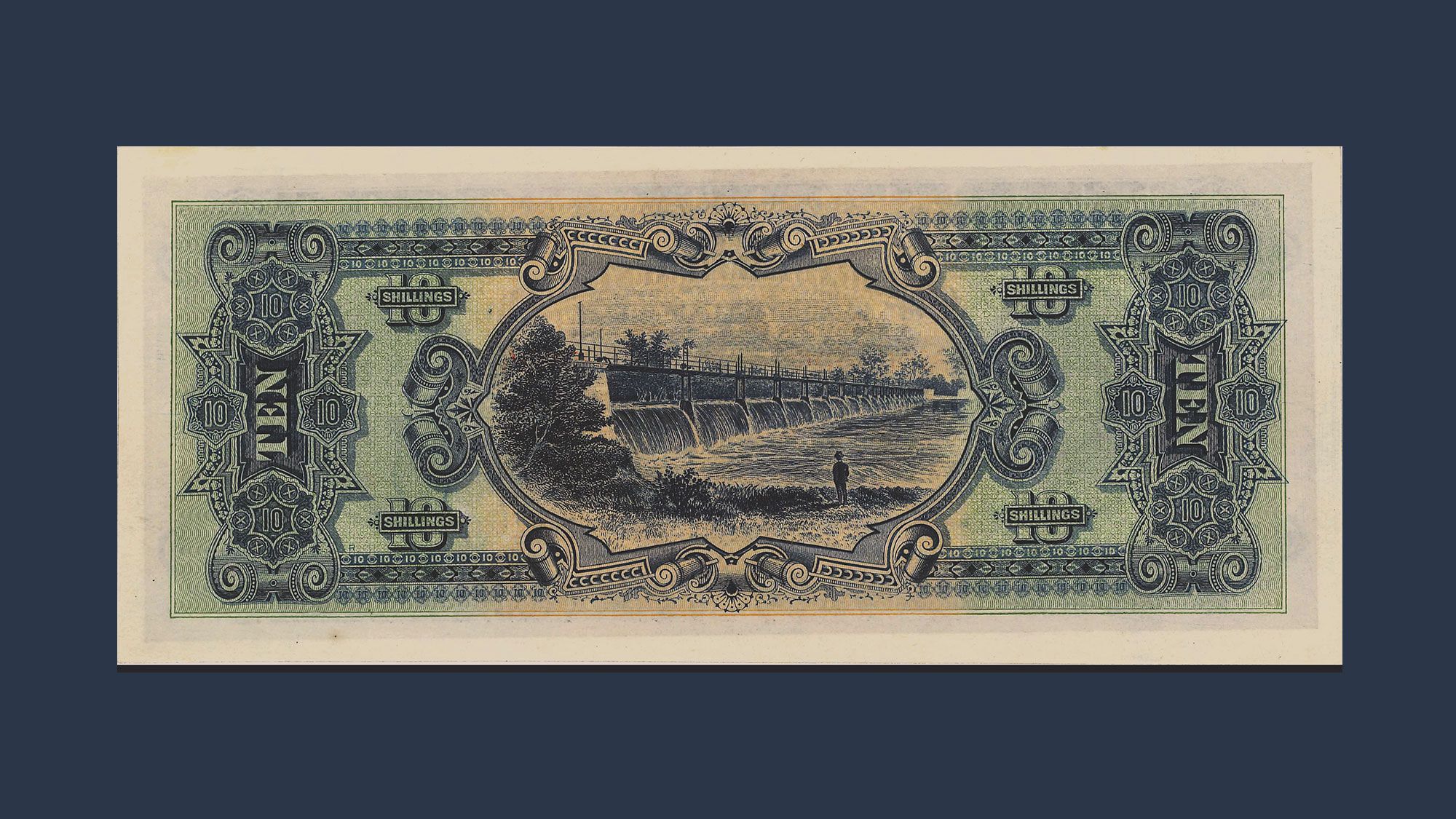 A defining symbol of Australia’s nationhood.

Fisher sought to construct a nation from the former colonies and to invest it with new, all embracing symbols. He breathed a national spirit into all facets of his political and his personal life. It was the Fisher Government that radically changed the Australian Coat of Arms to reflect a more nationalistic vision of Australia.

Andrew Fisher’s vision for Australia included a Commonwealth banknote issue that would provide a stable, unified currency to facilitate economic growth and to re-invigorate confidence in a banking sector that had all but collapsed two decades earlier.

He believed the notes would underpin his efforts to unify Australia as a nation.

To promote a greater sense of public involvement in the new note issue, the Government launched a competition, offering a £50 prize for the winning design. A formal announcement of the competition appeared in the Commonwealth of Australia Gazette, 5 November 1910.

The brief was simple. The note had to be attractive with subdued harmonious colours and it had to baffle the forger. The new Coat of Arms was required to be a prominent part of the successful design for the face of the new Australian currency, while a scene of Australia was required to adorn the back of the note.

Artist Hugh Patterson, who re-designed the Coat of Arms was appointed by Fisher to the committee supervising the design competition. The winning design was however deemed unsuitable by the Committee.

The Government turned to London and engaged the services of Bradbury Wilkinson & Co plate engravers. 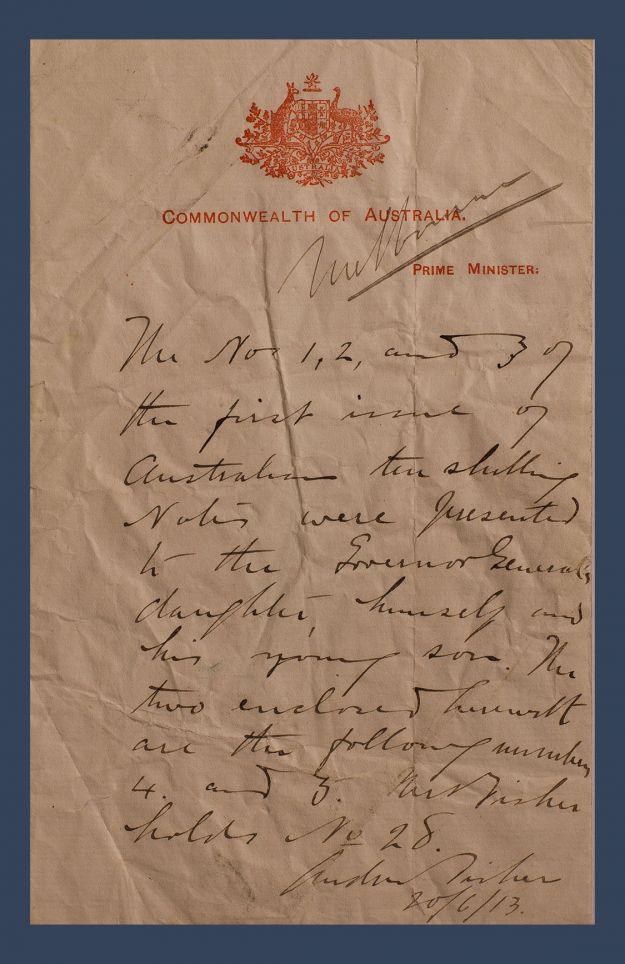 Melbourne
The No's 1, 2 and 3 of the first issue of Australia's ten shillings were presented to the Governor General's daughter, himself and his young son. The two enclosed herewith are the following numbers 4 and 5. Mrs Fisher holds No. 28.
Andrew Fisher 20/6/13