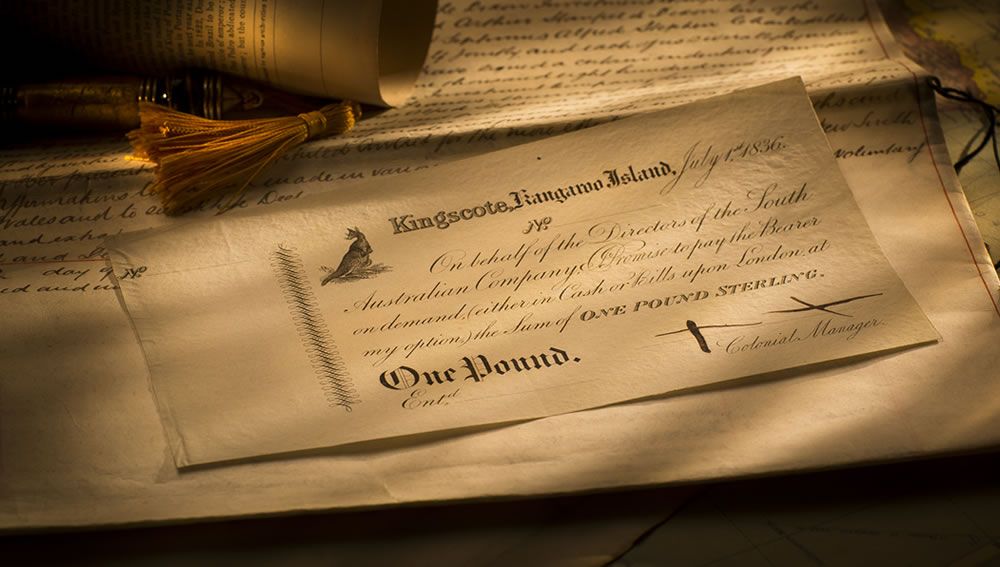 The South Australian Kingscote notes were the first notes issued by South Australia. They are extraordinary rarities, of the highest historical significance and worthy of the finest collections, whether public or private. That a Kingscote Sixpence was acquired by ANZ archives is testimony to the importance of the Kingscote notes.

This 1836 One Pound Kingscote note is the only example privately held and has a glorious history.

In 1834 the British Government passed the South Australian Act with the purpose of encouraging migration of free settlers from Britain to build a new colony in South Australia.

The South Australian Company was formed in London on 9 October 1835 to purchase land for the new settlement. Leading British businessmen including George Fife Angas, Thomas Smith and Henry Kingscote were founding members of the Board of Directors. In January 1836 the Company despatched four ships to Kangaroo Island. A small settlement was established on the island and named Kingscote after one of the directors.

Angas was an experienced financier and realised that the South Australian enterprise would require banking facilities, and arranged for one of the ships to transport a cashier and accountant (Edward Stephens), banking clerk (William Malpas) along with a prefabricated banking house, ledger, iron chest, coins and banknotes.

The currency in the shipment included South Australian Company banknotes dated 1 July 1836 and domiciled on Kingscote, Kangaroo Island. Printed by Chapman & Co, 27 Cornhill London, they acted as promissory notes for local payment and were issued in the following denominations: Sixpence, One Shilling, Two Shillings, Five Shillings, Ten Shillings and One Pound.

Only the One Pound denomination offered here featured a kangaroo vignette.