This Holey Dollar was originally owned by William Long who arrived in New South Wales as a convict in 1815. The coin has been held by his descendants for nearly two centuries and has traversed the globe moving between continents as it passed within the family. Long's prized Holey Dollar is now back home and is available for private sale. 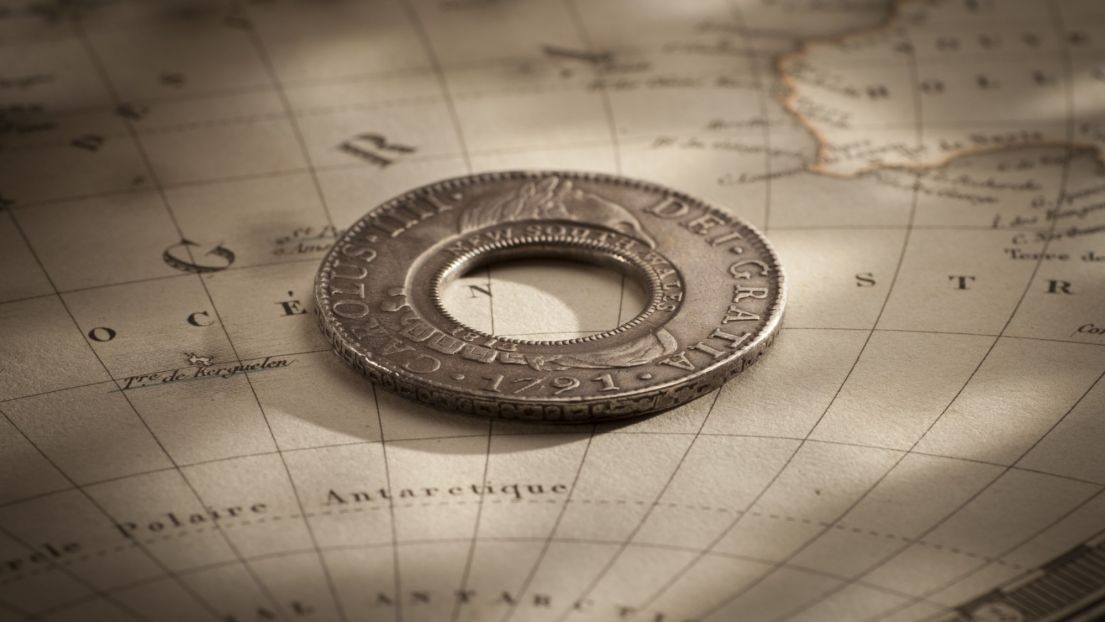 The sale of this Holey Dollar demonstrates that clearly we are both.

It was an emotionally charged transaction for the Canadian seller, parting with an heirloom that had been in his family for nearly two hundred years. Trepidation and a touch of sadness.

It was an emotionally charged transaction for us, as the buyer, although the emotions were vastly different. Ours was excitement. The opportunity to secure a previously unrecorded example of the Holey Dollar and bring it back home to its country of origin.

And as our discussions with the seller proceeded we realised that this Holey Dollar presented a narrative that was rich in Australian colonial history. And his family history.

William Long was emancipated in 1822 and became a very successful businessman in the colony. He died in 1876 leaving an estate valued at £100,000.

This Holey Dollar defined the family’s humble beginnings in the colony of New South Wales. The family fortunes were made in the penal colony and the coin symbolised their proud colonial heritage.

This Holey Dollar - the technical aspects.

This Holey Dollar was struck on a silver dollar minted at the Mexico Mint in 1791.

Quality and date of the original coin.

The date 1791 is an important one. It was the very first year that the portrait of Charles IIII appeared on the Spanish Silver Dollar.

Of the 274 Holey Dollars catalogued in 1988, only six Holey Dollars were created from Spanish Silver Dollars dated 1791. Two are privately owned. Four are held in institutions, the Museum of Victoria with three held in the State Library of New South Wales.

Quality and alignment of the counter stamps.

The counter stamps are graded very highly at About Uncirculated.

More importantly the counter stamps are vertically aligned … News South Wales is in the same vista as 1813 and the date 1791.

Only four out of the 274 Holey Dollars identified in 1988 have counter stamps that are vertically aligned. This coin is now the fifth.

There is conjecture amongst historians that those Holey Dollars that have vertical alignment may have been especially struck with strict controls in place to guarantee a precision in the counter stamping process.

It is fair to say that the counter stamps on all but five of the surviving Holey Dollars are "all over the shop".

A gift from William Long to his family.

Governor Lachlan Macquarie etched his name into numismatic history when in 1813, he enlisted the services of convicted forger, William Henshall, to create the nation’s first coin, the Holey Dollar.

However, the narrative of this particular Holey Dollar is so much more than the Lachlan Macquarie and William Henshall connection.

The story of this Holey Dollar is about the family that owned it.

This Holey Dollar was originally owned by convict William Long who arrived in the penal colony of New South Wales in 1815 in the ship ‘Baring’. He served a seven year sentence and was described as a ‘whitesmith’, working with metals.

Emancipated in 1822 he became one of the wealthiest men in the colony.

By 1828 he was licensee of the Saracen’s Head at Millers Point (Sydney Rocks) and in 1831 took over the Commercial Tavern in George Street North, one of the most lucrative hostelries in Sydney.

By 1835 he was a prosperous wine and spirit merchant.

Below an advertisement from Saracen’s Head Wednesday 2 July 1828.

The coin was passed to his youngest daughter Selina who in 1871 married George Ashwin Cheeke, nephew of Alfred Cheeke, Judge of the Supreme Court of New South Wales. (The Cheeke family was heavily involved in legal circles and racing circles.)

In 1886, Selina and her husband travelled to England, taking the coin with them.

In 1901, the Holey Dollar travelled again but this time to Canada, the property of Selina’s son also named George Cheeke where it remained in the Cheeke family until 2017.

Copies of letters and paperwork from the Cheeke family accompany this Holey Dollar.