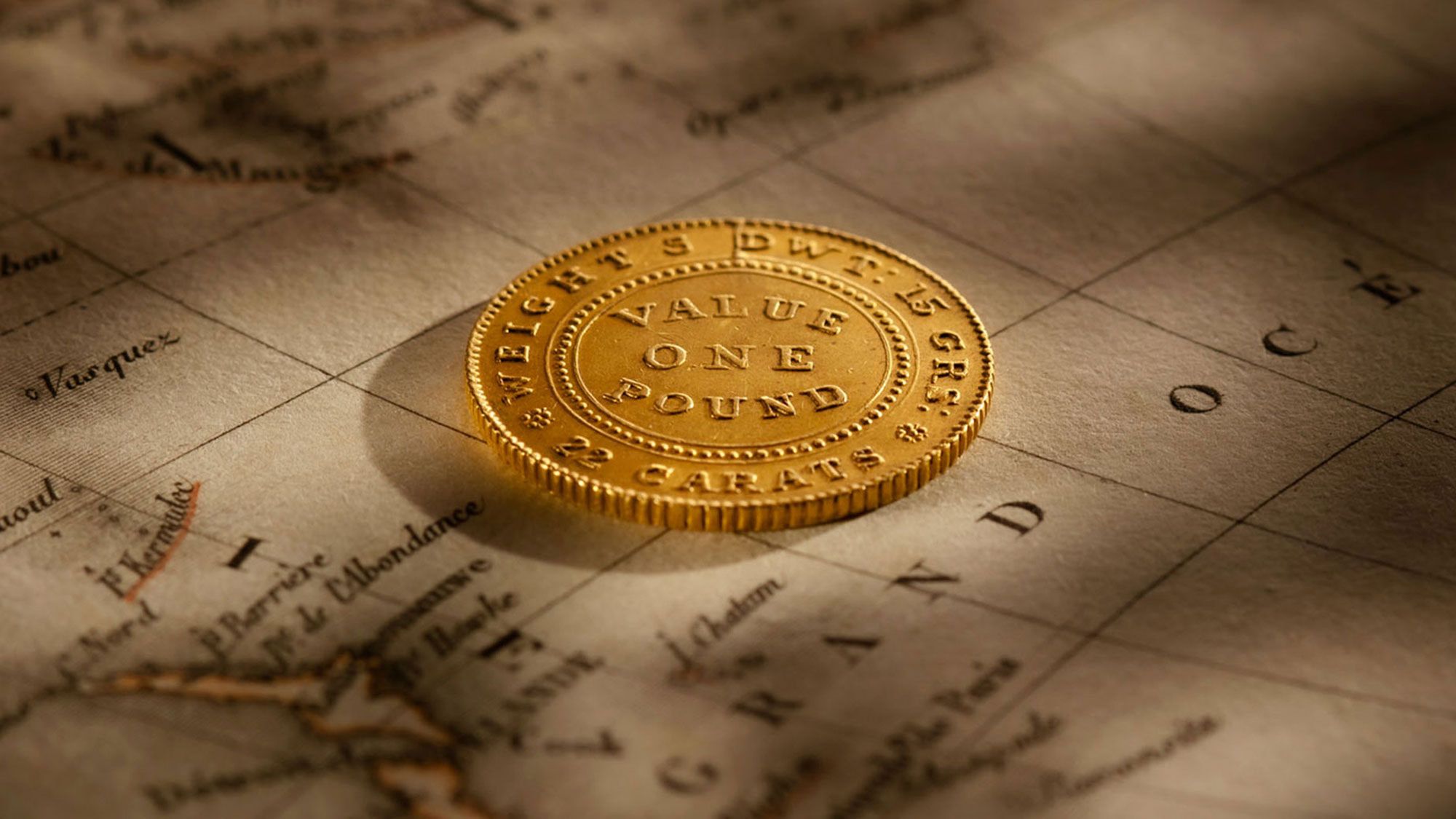 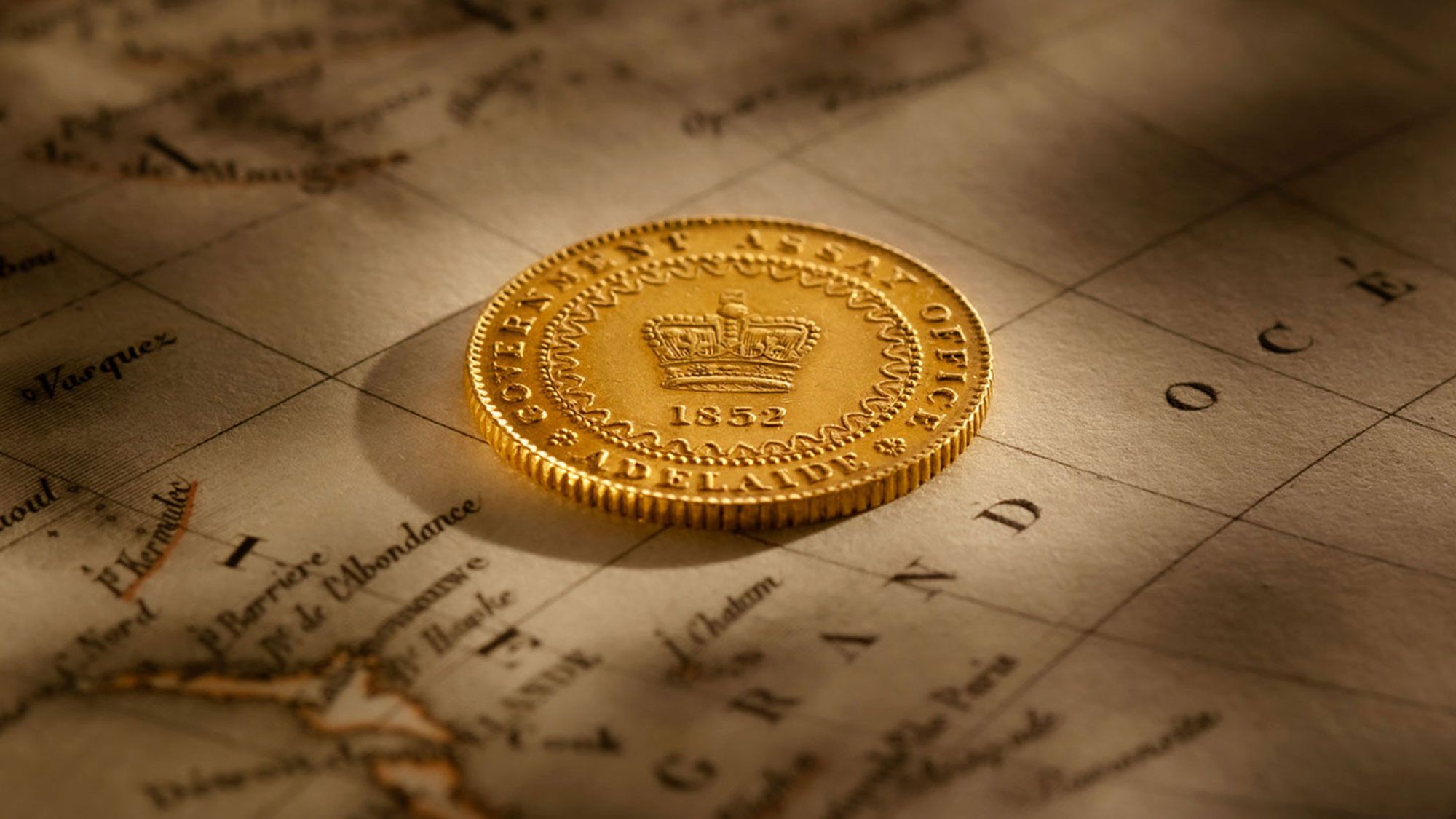 The extremely rare 1852 Adelaide Pound Type I
COIN
The extremely rare 1852 Adelaide Pound Type I
PRICE
$175,000
STATUS
Available now
QUALITY
Extremely Fine
PROVENANCE
Private Collection Queensland
COMMENTS
How would today's collectors react if Governor Lachlan Macquarie had produced the first forty Holey Dollars with a style that made them undeniably connected to the very first production run of Australia's first coins. Ecstatic, I would have thought. Unwittingly that is exactly what die sinker and engraver Joshua Payne did when he set up the dies and commenced production of the nation's first gold coin at the Government Assay Office, Adelaide. The reverse die, with its simple, elegant beaded inner circle cracked, the mishap discovered after forty-plus coins were produced. And then, when he swapped over the reverse die, he replaced it with one that had a completely different design. Joshua Payne's actions unknowingly created a rarity of the highest order, the Adelaide Pound Type I, struck during the very first production run of the nation's first gold coin. Defined by a reverse with the beaded inner circle and the tell-tale crack in the DWT area of the legend, perhaps forty examples are known. Technical shots are shown in the READ MORE section. 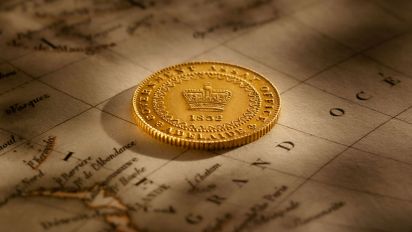 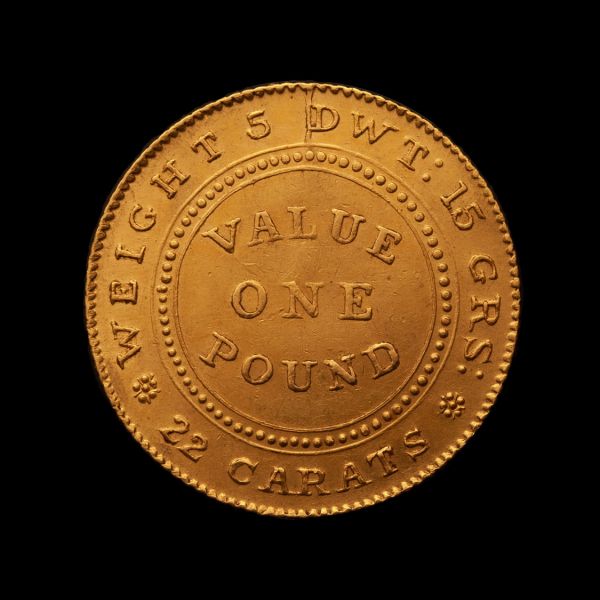 Strength in the edges. But also strength in the 'VALUE ONE POUND' detail. Most Type I Adelaide Pounds show weakness in the inner design area, this coin the exception.

We know that this Adelaide Pound was minted during the very first production run, if not the first day then at the very least the first week.

So how can we be so sure?

The cracked reverse die was replaced. The critical point being that the new reverse die had a different design. More intricate, it featured a scalloped inner border abutting a beaded inner circle. (The reverse design mirrored the crown obverse design.)

There was an upside to the disaster that occurred during the first production run of Adelaide Pounds. While the pressure exerted on the edges cracked the reverse die, that same pressure resulted in the coin having almost perfect edges, beautiful strong denticles framing the central crown design. 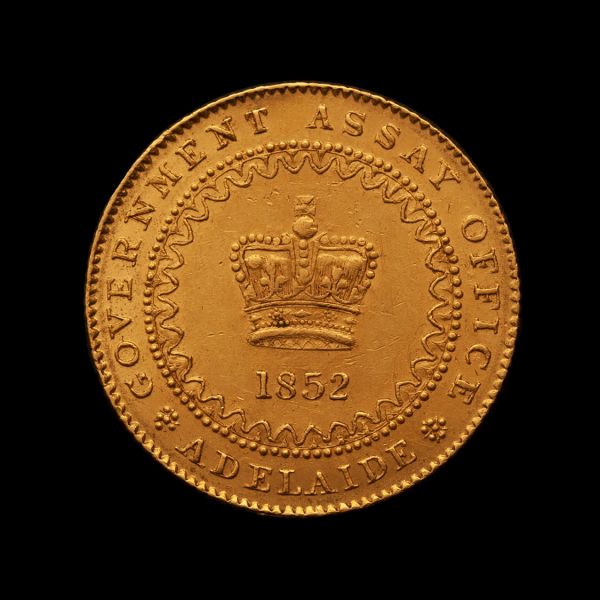 Strength in the edges. But also strength in the detail of the crown. Most Type I Adelaide Pounds show weakness in the crown area, this coin the absolute exception.

A special place in Australia's history

The 1852 Adelaide Pound holds a very special place in Australia's history as the nation's first gold coin. It was minted in November 1852 at the Government Assay Office, Adelaide using gold that had been brought from the Victorian gold fields.

Minted by authority of the Bullion Act of 1852, coin production commenced in November of that year and finished in February 1853 when the Act expired. South Australia produced just over 24,000 coins in that short three-month time-frame.

The Assay office had opened months earlier on 10 February 1852, its sole purpose to assay gold nuggets brought from the Victorian goldfields and to re-shape them into ingots. No minting expertise was required in the casting of the ingots. While they conformed to a shape and style, they were crude and rough and ready and each had its own unique shape and size depending on the weight of gold assayed.

The intention was that the Adelaide Pound would circulate. And be used in every day commercial transactions, as part of a grand plan by South Australia's Governor, Sir Henry Young, to stimulate his state's ailing economy. The coin was never given kid gloves treatment during the production process.

How this coin survived the production process, and more than a century and a half later is still in an almost original state with lustre on both obverse and reverse, is almost impossible to fathom.