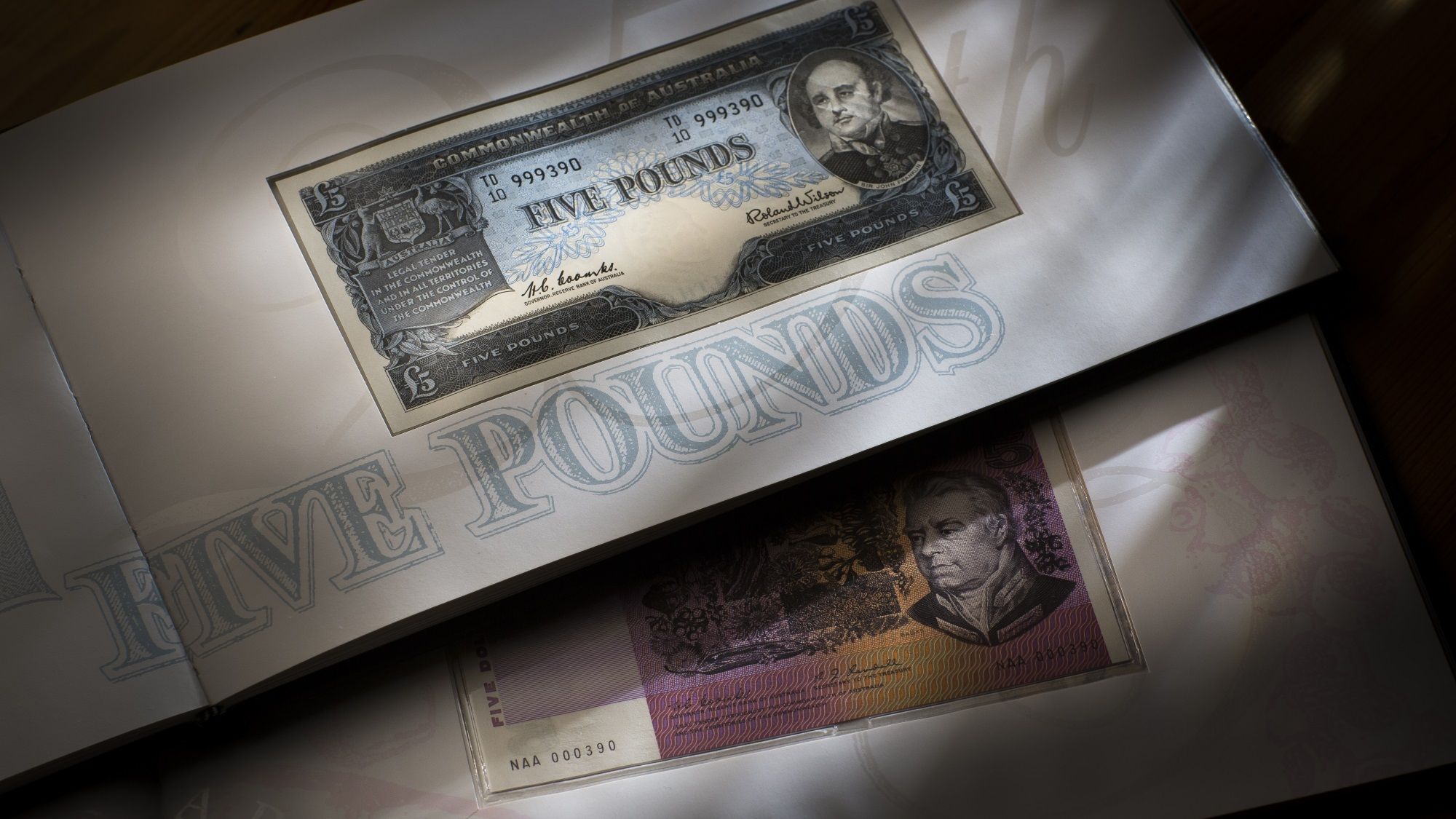 In both collections, buyers were offered banknotes, from Government Archives, notes numbered below 1000 and which had never before been made available to the general public.

If the term 'Government Guarantee' can be applied to the quality of a numismatic product … then this is it.

The notes had never circulated but had been especially set aside in the Reserve Bank of Australia’s ‘special holdings’.

Brilliant presentations. Each collection individually numbered as one of 800 produced.

The serial numbers of the banknotes were especially selected by the RBA to match the collection number.

A lucky few managed to acquire both collections with the same number.

Our client one such fortunate collector who fluked sets numbered 390.

The 25th Anniversary of Decimal Currency Rare Collector Edition, released in 1991 and this Collection numbered 390.

Decimal Currency changeover was a major chapter in Australia’s history that began in 1966.

Four decimal banknotes were introduced in that year, the $1, $2, $10 and $20 replacing their Ten Shillings, One Pound, Five Pound and Ten Pound monetary equivalents.

This collection includes the four pre-decimal banknotes that were being replaced, each is Uncirculated and selected from the very last print run.

The collection also includes the four decimal banknotes that were introduced as replacements for the aforementioned. Each note is Uncirculated and has been selected from the very first print run.

The Triple Anniversary Rare Collector Edition, released in 1994 and this Collection numbered 390.

This collection includes an Uncirculated banknote from the very first print run of the $5, $50 and $100 and all with the same serial number.

A total of 800 sets were released and this set is also numbered 390. 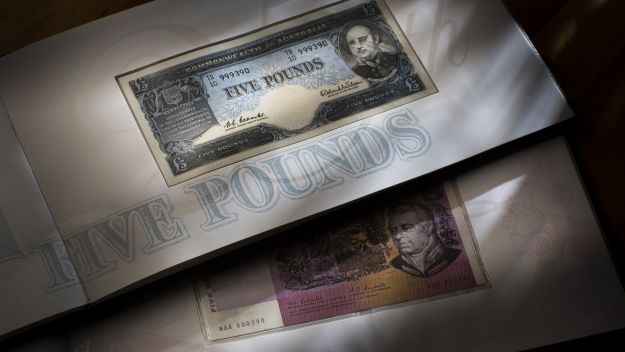 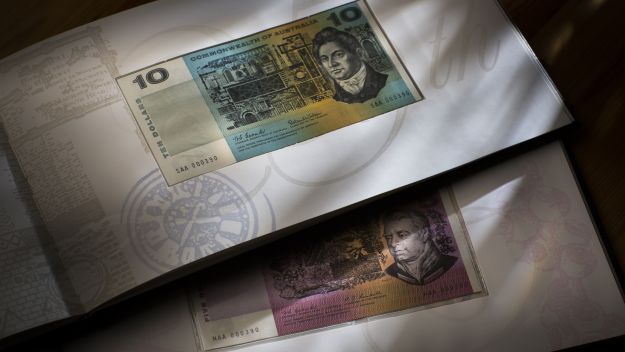 Note the continuation of the blue colour from the Five Pounds to the Ten Dollars.

The Five Dollars shown in the background is contained in the Triple Anniversary Collection released in 1994. 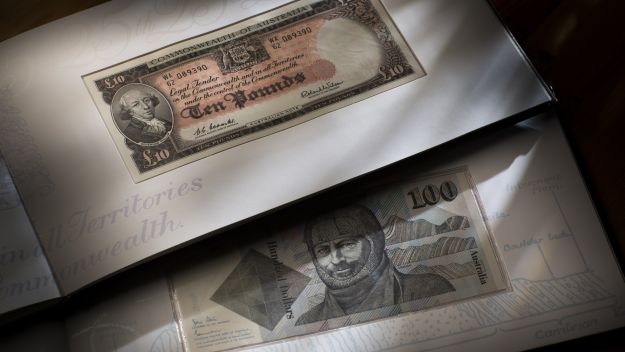 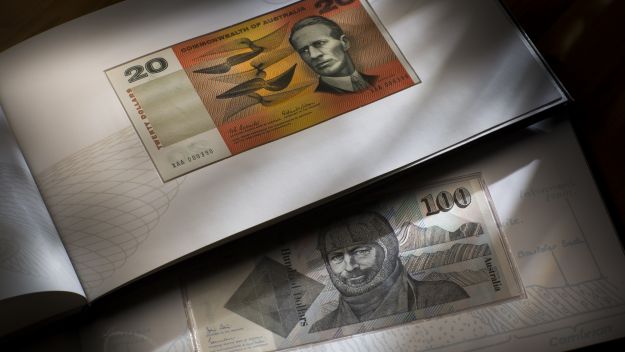 Note the continuation of the red colour from the Ten Pounds to the Twenty Dollars.

The One Hundred Dollars shown in the background is from the Triple Anniversary Collection released in 1994.

It wasn’t until the late 1950s that the Menzies Government finally recognised the economic importance of converting Australia’s currency to a new decimalised one, in keeping with those of many of its trading partners and the overwhelming majority of the world.

The argument for switching came down to a simple practical consideration. The Australian pound, like its British counterpart, was divided into 20 shillings of 12 pence each, making the arithmetic of financial transactions unnecessarily difficult.

This wasn’t just a question of personal convenience but of national productivity. Research had shown that decimalisation would save the Australian economy more than £11 million a year, which would quickly offset the £30 million cost of conversion.

In the 1958 election campaign, Menzies promised to seriously consider decimalisation, but once in power did not exactly prioritise the issue.

However, following the committee’s recommendations, the government introduced the Currency Act 1963, which nominated 14 February 1966 as Changeover Day (or C-Day), followed by a two-year transition period during which both currencies would be legal tender.

Decimalisation gave Australia the opportunity to create an entirely new currency that, through its name and the design of its notes and coins, would reflect how the nation saw itself.

The Government announced a competition for the naming of our new currency. “Auster” was the name suggested by Holt (instead of dollar). Suggestions were as bizarre as: Magpie, Noodle, Pacific, Tasma, Anzac, Brumbie, Melba. Koala, Kanga, Roo, Emu and Merino. Politician’s names were also considered.

The cent was universally accepted.

In June 1963, Menzies, ever the monarchist, rejected all of these in favour of the ‘Royal’. However, this met with widespread public disapproval and on 19/9/1963 Holt announced that the new currency would be the dollar, divided into 100 cents. The public reaction to this was a lot more positive.

Making the change an easy one for the population.

Advertising and marketing the changeover was extensive in all media forms: banks, radio television, newspapers. Every household received two booklets.

To increase acceptance of the new currency, the colour of the decimal notes were maintained from their pre-decimal counterparts.

The Government in 1967 introduced the Five Dollar paper note.

The delay was simply so as not to confuse the public as it had no pre-decimal equivalent and would have added to confusion during decimal changeover in 1966.

Further changes occurred in 1973 with the introduction of the $50 banknote and in 1984 when the $100 note was introduced.