There is no greater representation of the Perth Mint than the 1899 Perth Mint Proof Half Sovereign. Luxurious gold. Struck in the mint's year of opening. And the prestige of being unique.

Rare Perth Mint coins collectively worth several million dollars were flown from Melbourne and displayed at the Perth Money Expo on February 11 and 12, 2017, courtesy of Coinworks. Highlight of the display, the unique 1899 Perth Mint Proof Half Sovereign valued at $550,000.

For Coinworks there is no greater representation of the Perth Mint than the 1899 Perth Mint Gold Proof Half Sovereign. So taking the coin to Perth to display at the Perth Expo was a natural.

The Perth Mint is a leading precious metal producer with a highly acclaimed international reputation. It is an institution that all Australians, and in particular West Australians, should be extremely proud of.

The 1899 Proof half Sovereign has been crafted from gold, dug from the gold fields of Western Australia and proudly bears the ‘P’ for Perth mint mark. And the year 1899 is the very first year of operation of the mint. 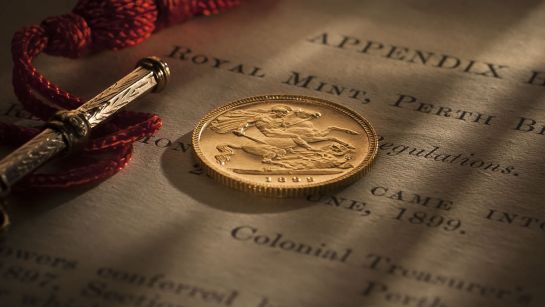 The coup de grace with this piece is that it is unique which gives this particular coin the notability and prestige that we associate with the esteemed institution that is the Perth Mint.

The Perth Mint is today Australia’s oldest operating mint. The Mint opened in 1899 as a colonial branch of the Royal Mint London in response to the discovery of rich gold deposits in Coolgardie and Kalgoorlie. Its charter was to strike sovereigns and half sovereigns.

Although the mint struck 691,000 sovereigns for circulation in its first year of operation, it did not issue any half sovereigns. However, the dies were prepared by the Royal Mint in case they were required.

The half sovereign dies were used to strike only one coin – an 1899 Proof Half Sovereign struck to proof quality as a collector’s item. It is unique. There no other known examples held privately nor in public institutions.

The 1899 gold coin was sold to a Kalgoorlie collector for $400,000 in 2011. It has been formerly owned by numismatic luminaries Syd Hagley and Ross Pratley, both revered 20th century collectors.
The Proof Half Sovereign was part of a larger, multi-million dollar display of Perth Mint rarities exhibited by rare coin specialist Coinworks.

Coinworks managing director Belinda Downie says that ‘Proof’ coins are collector pieces, synonymous with rarity with only a handful ever struck and never intended to be used in every-day use.

But what makes Perth Mint ‘proof’ Gold Sovereigns incredibly rare is that over the years in which the Perth Mint was operating as a gold coin producer (1899 – 1931), the mint only struck ‘proof’ sovereigns in three separate years – 1899, 1901 and 1931.

Even rarer again, the Perth Mint struck ‘proof’ Gold Half Sovereigns in only two separate years – 1899 and 1901, both of which are unique.

But while the Perth Mint commenced striking Australia’s gold coins in 1899, and is still to this day a major gold coin producer, the mint in 1941 diversified its gold coining repertoire, and began striking the nation’s coppers (pennies and halfpennies) at the request of Treasury.

The mint continued to strike copper coins until 1964, two years before Australia converted to decimal currency.

Following the traditions of the Royal Mint London, the Perth Mint struck limited mintage ‘proof’ (presentation) strikings of those coins struck for circulation.

Downie’s comments on the copper coins on display are as follows: “Well preserved proof coins of the Perth Mint are unrivalled for quality. The coins not only display superb levels of detail in their design, but qualities and colours that are simply unmatched by those of the Melbourne Mint. Each coin is a work of art, as individual and as beautiful as an opal. Furthermore they are rare. ”

The Perth Mint commenced striking proof coinage as part of a commercial enterprise in 1955 and continued until 1963, before decimal changeover. At the show, Coinworks displayed some of the finest examples of coins struck at the Perth Mint between 1955 and 1963, including the very rare 1955 Proof Penny and Halfpenny and the 1956 Proof Penny.

“The proof record pieces of the Perth Mint form an integral part of our currency heritage,” Downie says. “It’s an historical edge and exclusivity that underpins their strong investment performance.”