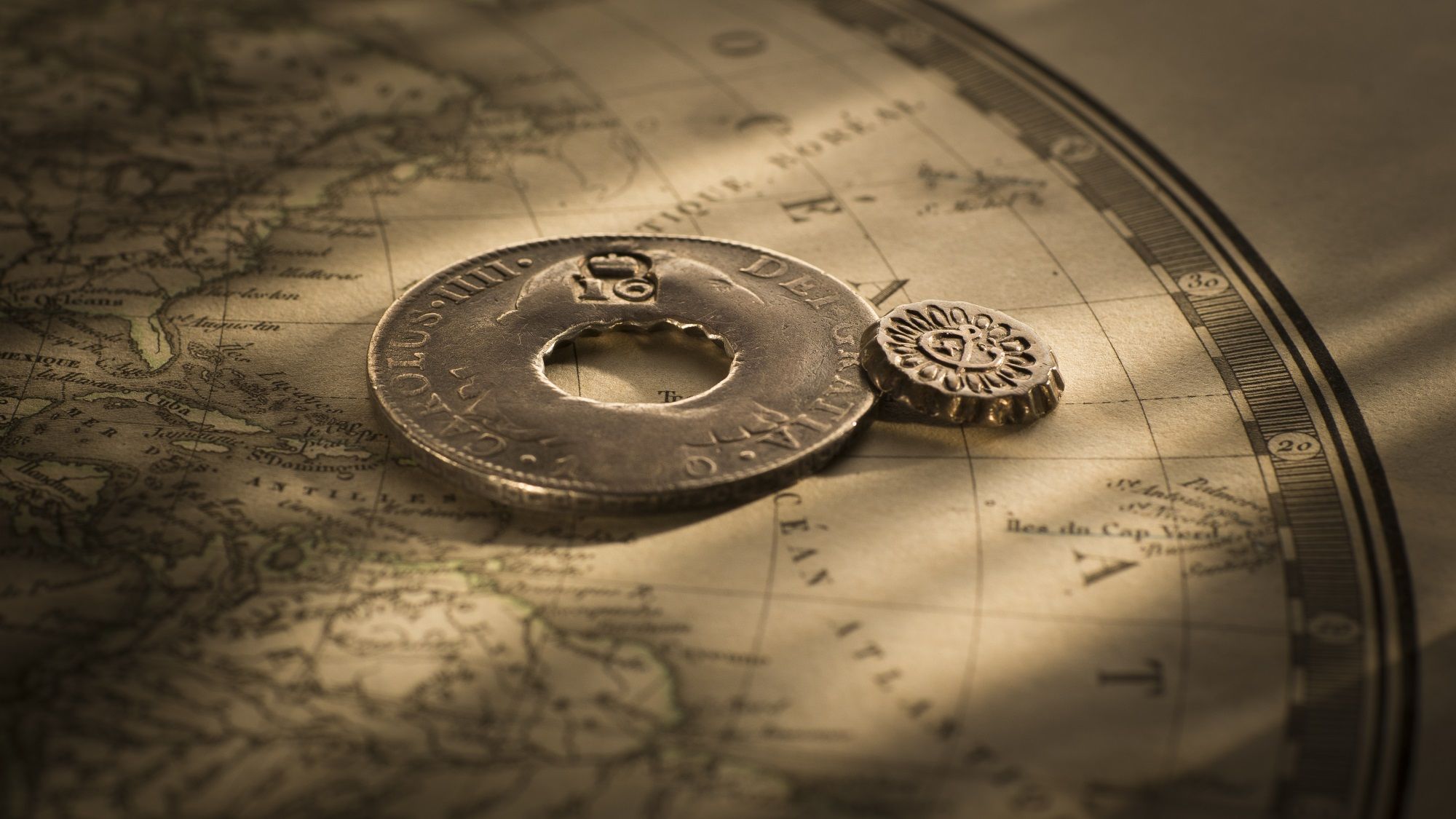 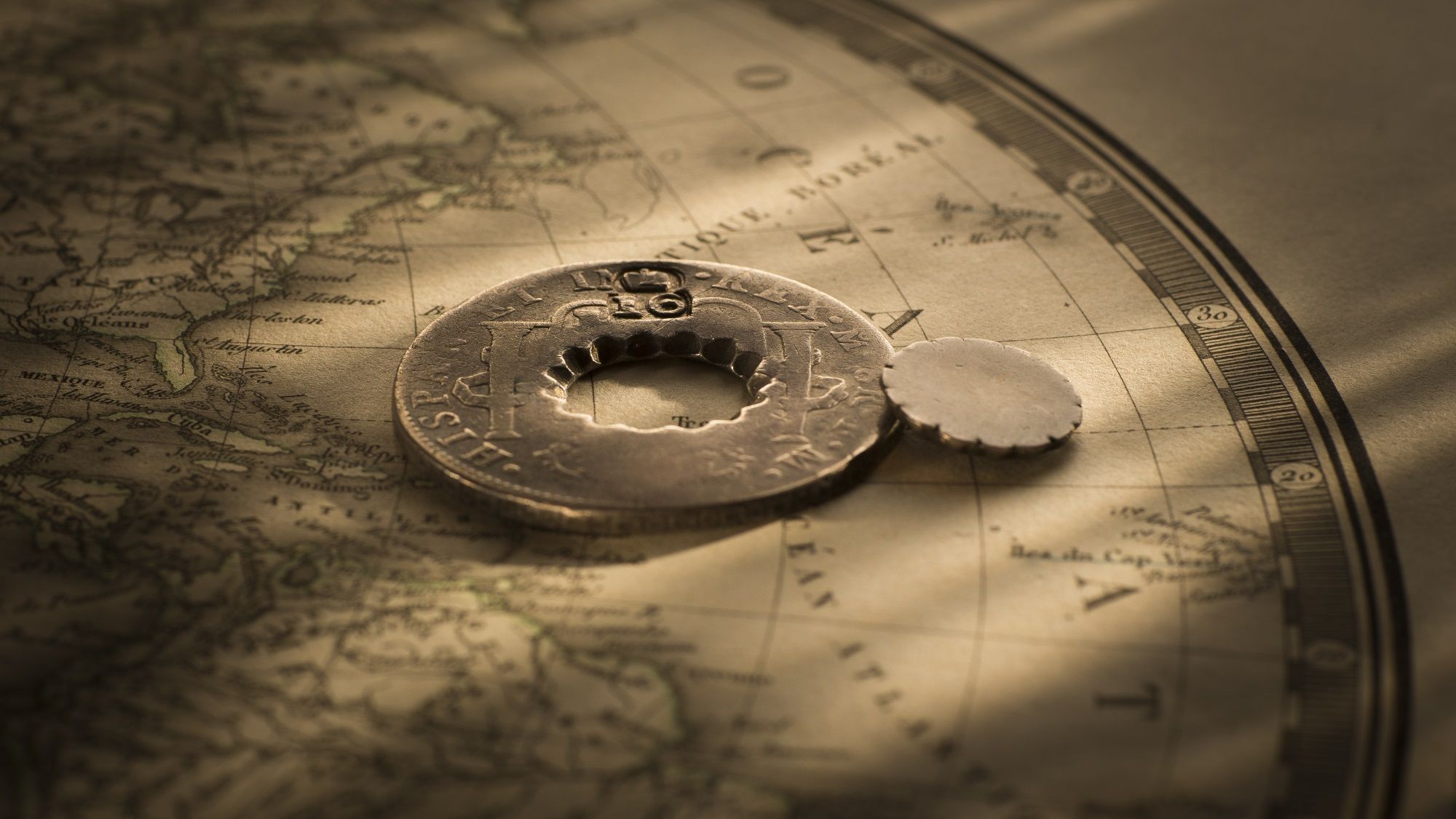 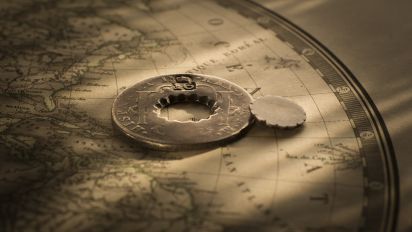 This Holey Dollar was struck in 1813 on a 1790 Mexico Mint Spanish Silver Dollar, pierced from the reverse side with crenellations. The pierced dollar was then counter stamped on the King’s head and on the reverse with a crowned 16 within a shaped indent. The monetary value was 16 bitts (the Dump had a value of 2 bitts).

Transitional Holey Dollars are supremely rare. They chronicle the limitations of communications in this era and the challenges of the colonial mints wishing to maintain silver coin production while at the same time observing the currency protocols necessitated for the passing of a monarch.

Eager to maintain production of silver coins to flow into Spanish coffers, a Royal decree granted the colonial mints the right to continue striking coins with the portrait of the deceased King Charles III. The legend was however amended to acknowledge the new monarch Charles IIII.

By 1791, the mints had received the portrait of the new king; the official portrait of Charles IIII appearing on the Spanish Silver Dollars for the first time in that year.

Dominica is a Caribbean Island. First sighted by Christopher Columbus in 1493, later colonized by the French in the 17th century and a British colony one century later.

Between 1642 and 1650, French missionary Raymond Breton became the first regular European visitor to the island.

In 1660, the French and English agreed that Dominica and St. Vincent should not be settled, but left to the Caribs as neutral territory.

But its natural resources attracted expeditions of English and French foresters, who began harvesting timber.

In 1727, the first French commander, M. Le Grand, took charge of the island with a basic French government; Dominique formally became a colony of France, and the island was divided into districts or "quarters".

Already installed in Martinique and Guadeloupe and cultivating sugarcane, the French gradually developed plantations in Dominica for coffee. They imported so many African slaves to fill the labour demands that the population became predominantly African in ethnicity.

In 1761, during the Seven Years' War in Europe, a British expedition against Dominica led by Andrew Rollo conquered the island along with several other Caribbean islands. In 1763, France ceded the island to Great Britain under the Treaty of Paris.

The same year, the British established a legislative assembly, representing only European colonists. French remained the official language, but Antillean Creole was spoken by most of the population. In 1778 the French, with the active co-operation of the population, began the Invasion of Dominica, which was ended by the 1783 Treaty of Paris. French invasions in 1795 and 1805 ended in failure.