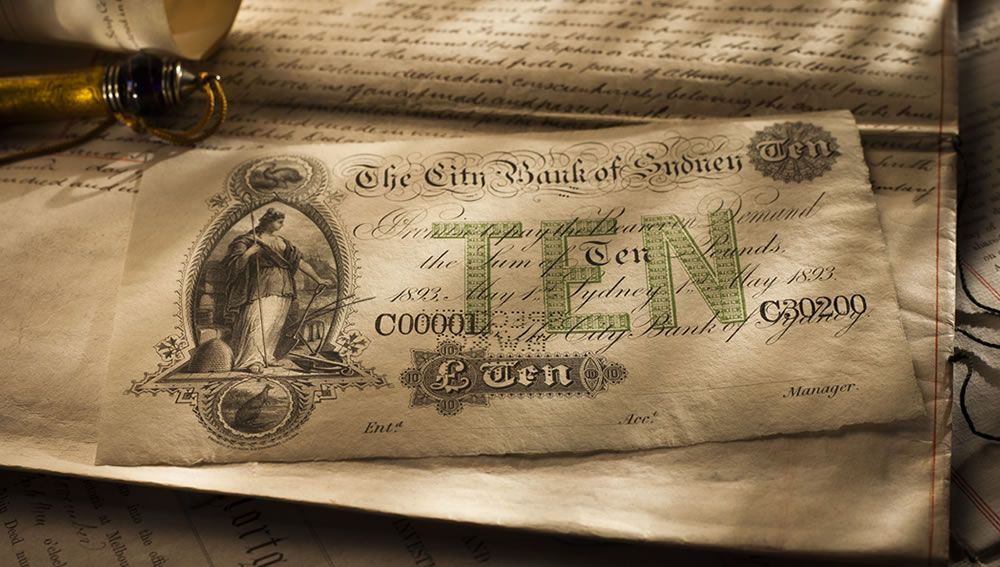 1893 City Bank of Sydney Ten Pounds
NOTE
1893 City Bank of Sydney Ten Pounds
QUALITY
Specimen
PROVENANCE
Spink London 2010
PRICE
$ 12,500
COMMENTS
That we have just been asked to put together a set of early Pre-Federation specimen notes for a client’s superannuation fund reflects the price at which they are being offered and their perceived investment value. And we would encourage other clients to consider similarly for these notes have genuine potential.
STATUS
Sold December 2014
Enquire Now

There has been a pocket of the market that has been attracting solid bidding interest at auction over the last six months. And that’s the Pre-Federation specimen banknotes. The reasons are obvious. The notes offer genuine quality. They offer scarcity. They have a glorious, rich history. And they are being offered at a price that makes them very affordable.

That we have just been asked to put together a set of early Pre-Federation specimen notes for a client’s superannuation fund reflects their current price levels and their perceived investment value. And we would encourage other clients to consider similarly for these notes have genuine potential.

Consider the merits of this Pre-Federation banknote. It is an original specimen note from The City Bank of Sydney, one of Australia’s early colonial banks. Its offering today reflects our respect for quality. The note has not circulated, and still retains its original characteristics and original colour unaffected by the passing of time.

The offering of this note also reflects our respect for history. The City Bank of Sydney was initially formed in 1863 in New South Wales. The notes of the Bank were prepared by London engravers and printers Bradbury Wilkinson.

Archived for more than a century before being offered for sale in 2010 at London Auction House Spink, this pre federation gem reflects its British design origins while at the same time it screams out “Colonial Australia”.

Notice the finely etched Emu and Kangaroo that are featured above and below a voluptuous Britannia. Turn over the note and there is the exquisite maritime design featuring an indigenous Australian standing shoulder to shoulder with an English sailor. It is a poignant message.

This note is a superb piece of history at a truly reasonable price.

Originally named The City Bank, The City Bank of Sydney was initially formed in 1863 in New South Wales. The bank subsequently opened for business on 1 February 1864.

Sir William Dixson was Chairman of Directors of the City Bank of Sydney.  You only need to visit Sydney’s Mitchell Library or ‘google’ Dixson’s name to appreciate his contribution to banking circles and the Australian numismatic industry. He was a prominent collector at the time, accumulating a superb collection of coins, banknotes and tokens that were later donated to the Mitchell Library.

The City Bank of Sydney lives on through its subsequent mergers. The bank merged with the Australian Bank of Commerce Ltd in 1916 and was eventually absorbed by The Bank of New South Wales in 1931, now known as The Westpac Banking Group Limited.