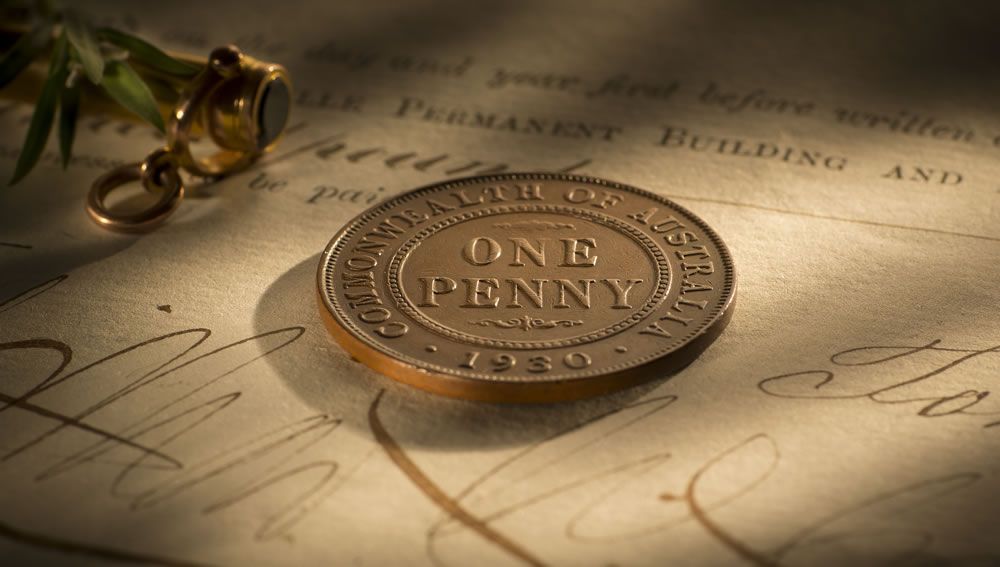 1930 Penny
COIN
1930 Penny
QUALITY
good Fine / About Very Fine
PROVENANCE
Private Collection Melbourne
PRICE
$ 29,500
COMMENTS
It is a fact that every 1930 Penny that we acquire … is sold relatively soon after it is featured. We have formed the view that our clients respect our selection protocols. And that they are also aware that we sell coins with the direct aim of buying them back. Consider this 1930 Penny. The owner has been a Coinworks client since the 1990s and we were eager to have his collection back into our hands and to sell on his behalf.
STATUS
Sold May 2015
Enquire Now

The obverse of his 1930 Penny is graded good Fine and shows six pearls and a partial central diamond. The lower scroll is strong, the upper scroll slightly weaker. The inner beading is crisp.

The coin is evenly toned and has minimal marks in the field and is extremely attractive to look at even though it has circulated. In our opinion a coin of this ilk has the greatest investment potential.

The 1930 Penny is a part of Australian folklore. The coin is a national icon and its star status has made it one of Australia’s most valuable coins. What’s most interesting is that the 1930 Penny stumbled into fame.

The 1930 Penny is still to this day the glamour coin of the numismatics industry and is unrivalled for popularity, enjoying a constant stream of demand unmatched by any other numismatic rarity.

There is no doubt it is an industry phenomenon, for in a market that is quality focused it is interesting to note that the 1930 Penny is keenly sought irrespective of its grading. And growth over the mid to long term has been significant across all levels of quality.