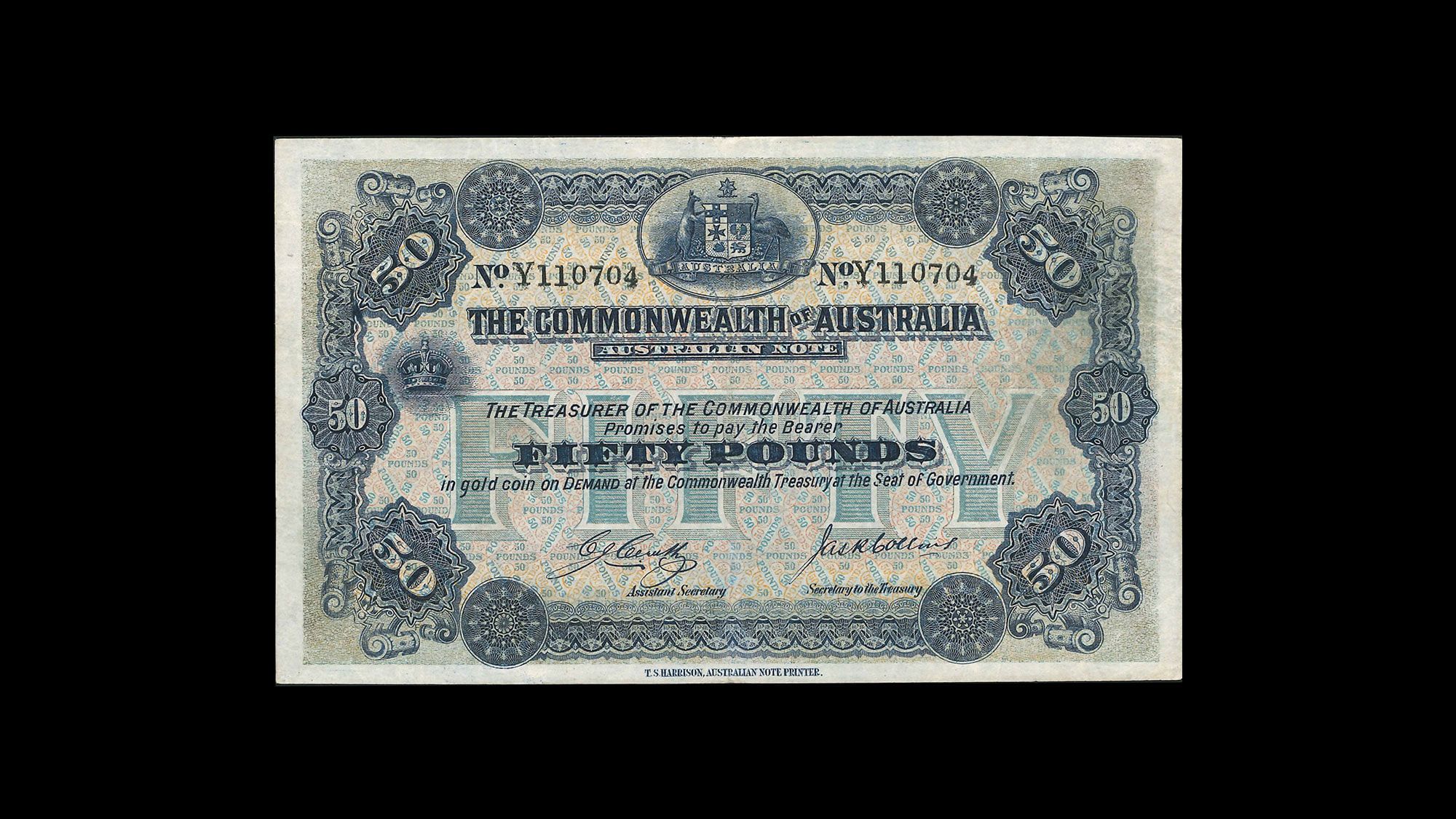 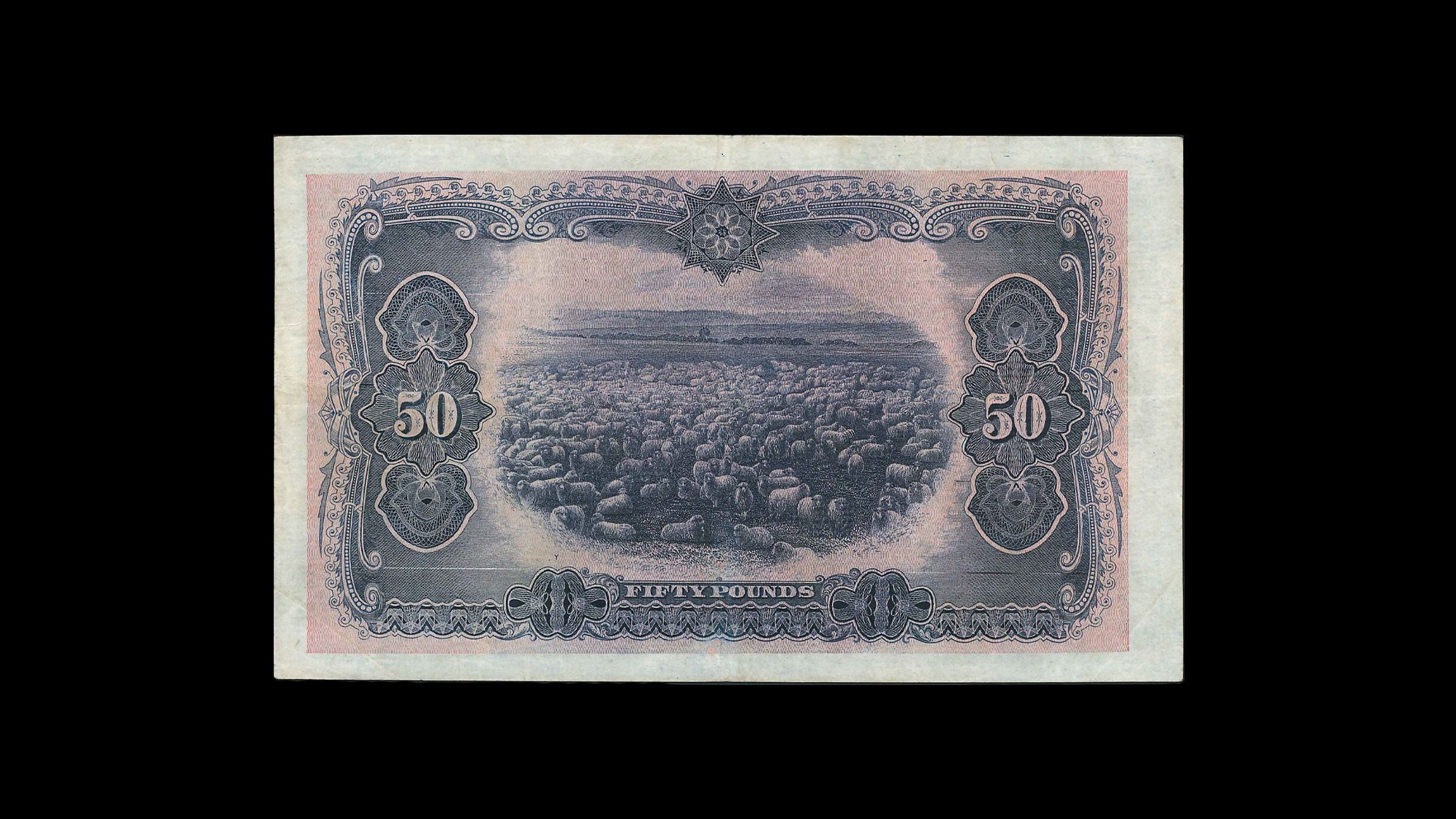 1920 Cerutty Collins Fifty Pounds
NOTE
1920 Cerutty Collins Fifty Pounds
QUALITY
Good Very Fine, crisp body and strong colours
PROVENANCE
Private Collection Melbourne
PRICE
$75,000
COMMENTS
Australia’s Cerutty Collins £50 banknote is an acclaimed rarity. Three print runs occurred during the lifetime of the Cerutty Collins Fifty Pounds, the first in 1920, the second in 1924 and the final run in 1940 each run identified by variations in the font and structure of the serial number. The serial number Y110704 of this £50 note confirms it as coming from the first run, and printed in 1920, which makes it of the highest rarity. Only three other examples are known, this being one of the finest. A validation of the respect held for this note, it is photographed in Mick Vort Ronald’s reference book, Australian Banknote Pedigrees, Second Edition, page 396.
STATUS
Available now

The Cerutty Collins £50 is a highly valued commodity, acclaimed by today’s collectors.

But it is noted that the Cerutty Collins £50 was a highly valued piece of currency way back in 1920 when it was first issued for it represented three months wages for male workers. And six months wages for their female counterparts.

Furthermore, it was issued in an era of economic turmoil. Australia was experiencing high inflation in 1920 when this note was issued, the economy moving quickly into a severe recession some three years later.

Then in October 1929, the American stock market crashed, acting as a catalyst that sent countries around the world into depression, including Australia that endured a 32 per cent unemployment rate in 1932.

And yet somehow this £50 note survived the turmoil and was kept aside as a collectable.

Simply remarkable when you consider the value that it held in 1920. And the economic and financial upheavals that is has endured.

Mick Vort Ronald, Australia’s foremost banknote author, and famed collector, reveals in a recent article in the Coin and Banknote Magazine, that he only ever had one example of the Fifty Pounds denomination in what was a lifetime of collecting.

The design of the £50 reflected Andrew Fisher’s vision as originally laid out in 1913 of having a uniquely Australian design featuring the new Commonwealth Coat of Arms and a scene of Australia on the back. (Andrew Fisher was Prime Minister of Australia in 1913.)

The £50 was printed in blue in a style of printing referred to as intaglio and featured the new Australian Coat of Arms at centre top, with the words THE COMMONWEALTH OF AUSTRALIA and the words AUSTRALIAN NOTE below.

The centre of the £50 has the paragraph, “The Treasurer of the Commonwealth of Australia Promises to pay the Bearer FIFTY POUNDS in gold coin on Demand at the Commonwealth Treasury at the Seat of Government.”

There is no mistaking that this is a £50 note. The value 50 POUNDS is the main feature of almost the entire background of the front of the note with the number '50' appearing liberally in the borders.

The back features a flock of merino sheep at Bungaree South Australia. Also printed in blue intaglio, the borders of the note are ornate and feature the number ‘50’.

James Richard Collins C.M.G.
Born on 14th March 1869, at Ballarat, Victoria, Collins entered the Victorian Public Service on 16th June 1886 as Treasury Clerk. Rising through the ranks he was eventually appointed Secretary to the Treasury and signed the note in that capacity.

Charles John Cerutty C.M.G.
Born on 25th November 1870, at Sale, Victoria, Cerutty entered the Victorian Public Service in 1888 as Treasury Clerk.  Rising through the ranks, he was eventually appointed Assistant Secretary to the Treasury and signed the note in that capacity.

(C.M.G. Commander of the order of St Michael & St George)